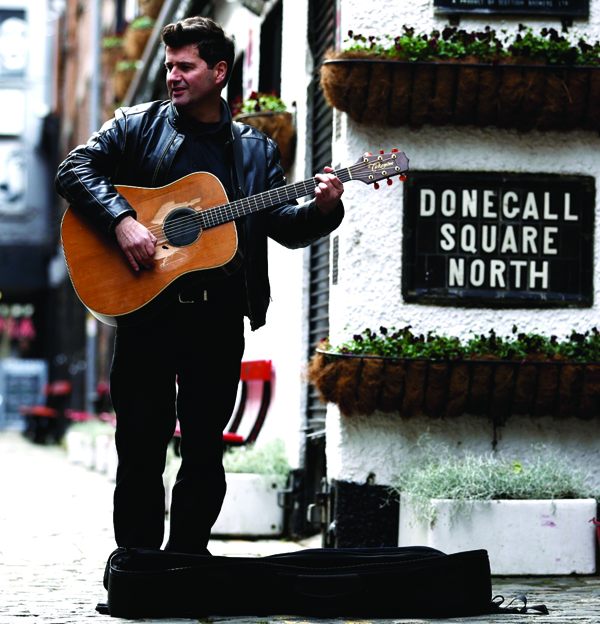 LATEST STAGE: Michael Cunningham’s lifelong love of music has led him to this point

WHEN Michael Cunningham was cutting his teeth as a musician busking on the streets of Belfast he had little idea that he would eventually end up making a living as a musician.
Ahead of the launch of his new album, Michael said his diverse career behind the mic has been leading up to this point.
“Growing up I think there might even have been a set of speakers in my pram but it wasn’t until I turned eight I got my first guitar,” he smiled
“At Park Lodge school I was a member of the school choir and then I graduated to busking on the streets of Belfast which as continued on and off for 30 years.
“Busking wasn’t a hugely popular activity during the Troubles. Car bombs, incendiaries and just plain old bomb scares often demanded rapid changes of pitch, both musically and physically. But it was a way to build confidence and develop your first play-list. That lifelong busking experience has helped define my music and my commitment as a performer.”
From there Michael formed his own rock bands and even a U2 tribute band ‘Elevation’ which he fronted before branching out into performing solo ‘Swing’ shows.
Last year Michael even abandoned his advertising career to focus full-time on his music.
Success followed quickly with his group ‘The Unusual Suspects’ performing at the 2016 Halloween Special in Belfast’s Titanic Quarter.
“We played to over 33,000 which I believe is the biggest local crowd ever for a cover band. Being on a massive stage with large screens and the fabulous backdrop of world class Titanic Belfast centre was amazing and we did it again this year.”
But now Michael says the time is right to do his own stuff and his album ‘Hidden Treasure’ is about to be released. He said it is a return to his roots.
“The title of album is very apt, because the songs are based on tapes I discovered in a dusty cardboard box in my garage. The tapes were recorded over 20 years ago when I was in a band with songwriter Jim Anderson called ‘Thelma & Louise’. The tracks were recorded over the three-year life of the band but then the hard realities of life came along. Jobs, mortgages and young families meant Thelma & Louise broke up and music became my hobby again.”
That was until he rediscovered the tapes.
“Playing back those ancient cassettes was a lightbulb moment for me. The sound quality and recording factors were terrible but I was blown away by the compelling power of the songs.
“I felt their themes of love, loss and loneliness were timeless, underpinned by haunting melodies and heart-tugging lyrics. It was been life-changing experience.
“The cassette tapes and recordings were impossible to re-master so I’ve dedicated myself to producing and recording the best of those songs, using top local musicians and state-of-the-art recording facilities and that is where Hidden Treasures has come from.”

To hear Michael’s songs visit www.reverbnation.com . Hidden Treasures is released on December 11 and can be purchased at www.michaelcunningham.co.uk.