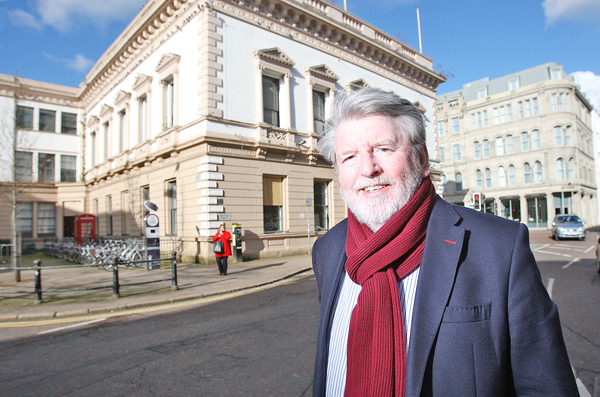 RENOWNED Belfast playwright Martin Lynch has welcomed a £33 million arts support package for the North from the UK government. The package is part of £1.57bn worth of funding aimed at providing vital assistance to the arts sector and venues.

Theatres, music venues and museums across the North have been closed since the Coronavirus took hold in mid-March. The Arts Council of Northern Ireland said it was “delighted” with the “lifeline support”.

GBL Productions’ Martin Lynch, whose latest collaboration work In The Name of the Son, based on the life of the Guildford Four’s Gerry Conlon, was set for its debut at the Lyric just days before lockdown. He said the announcement “was great for the venues”.

“Obviously The Lyric, The MAC, The Grand Opera House are all in serious, serious trouble, of course those venues house all our work so it can only be good for everybody.”

To help us determine where financial support is most urgently required, we have developed a survey for individual artists, practitioners and creative freelancers to find out how Covid-19 has affected them.

Martin spoke of how independent theatre companies won’t directly benefit from the support package and “that’s the problem”.

“There was a fund set up, up to £25,000 for independent theatre companies but it’s no-where near to cover the problems.”

He continued: “We were the first, our theatre production, In The Name of the Son was cancelled on St Patrick’s Day. We were booked at the Lyric for two weeks and had sold over 3,000 tickets, we had brilliant sales. It meant that, as we don’t get an annual Arts Council grant, we have to rely on that box office; we were due around £30,000 of box office from that. Our production had to be with it and we were looking at a profit of around £5,000, £10,000 which would’ve paid our staff for six months. We’ve lost all of that. None of the companies can put on shows. While I welcome the investment for the venues in Northern Ireland, there is still a gap and a worry for the independent theatre companies.”

With regards to theatre companies performing their work on stage and in front of a live audience Martin replied: “I would like to be optimistic.”

.@CommunitiesNI Minister @CarálNíChuilín has welcomed the news that @NIExecutive will receive £33million funding allocation & will be advocating for investment in the arts, cultural and heritage sector https://t.co/dxClBuvuf9 pic.twitter.com/C1C0WVrXy3

“The Waterfront Hall are holding back making any announcements until next month, that is where we hold our annual panto every year. They think things may have changed by then. In NI we’ve brought Coronavirus down to low, low levels, and there might be a treatment, a vaccine by the time we get back.

“This town has a real good live theatre audience. We have three, four good venues that cater really well for audiences and all of those people are missing out on that. Live theatre is special. I remember when I first came down from Turf Lodge to The Lyric in the mid-70’s to see a play and the impact it had on me. I was used to dart teams, snooker teams and that’s what I was used to in the social club in Turf Lodge. To then go into the theatre and sit down on a nice plush seat, to have your emotions moved, your intellect moved, it was a very special, unique experience.

“The main feeling I get from speaking to people like Brassneck’s Tony Devlin, who had directed In The Name of the Son, like Liam McMullan from my office, is that people are chomping at the bit to get back to producing live theatre. I think there is going to be a fantastic explosion of work when it all gets back in line again.”

Brassneck Theatre Artistic Director Tony Devlin added: “The money is of course to be welcomed, it’s just a shame the industry had to beg for it when it was on its knees with venues closing and individual artists suffering. Hopefully the money will filter down to those artists because there is no point in funding the venues if you don’t invest in the people who perform and work in them.”