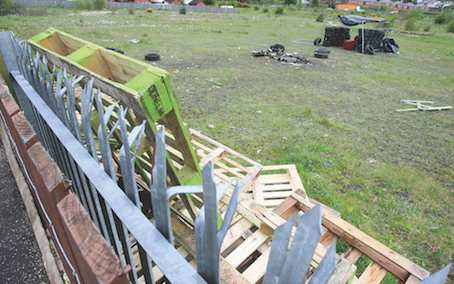 ‘PIGSTY’: Pallets and tyres have been gathered on the green field

A LONGLANDS resident has said he may have to leave his home due to the havoc wreaked by local bonfire builders.
The resident, who wished to remain anonymous, said that the bonfire site adjacent to homes on Longlands Avenue has become a hotspot for anti-social behaviour.
Last week, the North Belfast News visited the site where tyres and pallets had been dumped in preparation for the internment bonfire on August 8. Youths have been setting fires and drinking on the site for a number of weeks, and our source says that residents are too intimidated to speak out against them.
“They have been lighting fires every night,” he said.
“The field used to be great for the kids to play in. There was no glass, no rubbish there. People would have walked their dogs there too – this was a real quiet area. The ones that are building the bonfire aren’t even from Longlands Avenue – they’re from Bawnmore.
“They say they are building them for internment, but I know people who have spoken to ex-internees and they said that they aren’t doing it on their behalf. Each year they are building the bonfire, it’s a nightmare. Even though the bonfire isn’t until August they are hanging around Longlands Avenue, drinking and burning tyres. People are afraid to speak out because their windows will get put in.
“They started the other week, so we’ll have May, June, July and August. Each night they’re blasting music and burning things. The smoke is coming into the houses – it’s a disgrace. The place is like a pigsty.”
Antrim and Newtownabbey Borough Council own the site, but the resident says that they have refused to act against the bonfire.
“Last year the council wouldn’t admit that they owned the land. Now that we know they own the land they still won’t do anything about it. It’s causing serious trouble and it’s a health risk. Each year it has got bigger and bigger. The council need to do something because the people of Longlands don’t deserve this.”
He continued: “I have considered asking for a transfer because I couldn’t live in a place like this every year if it continues.”
We asked the Council for a statement but none had been forthcoming at the time of going to press.