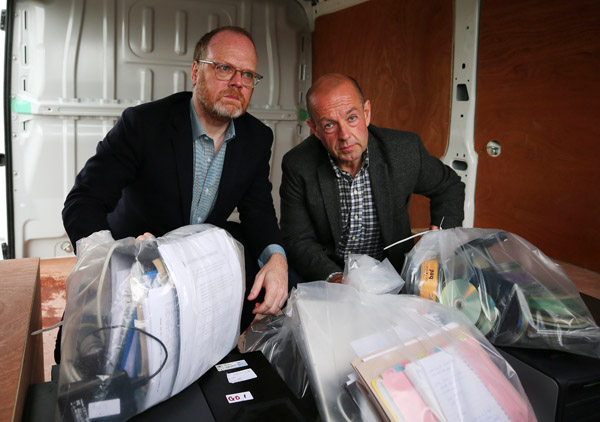 TWO journalists who had materials seized by police after their documentary into the Loughinisland massacre have collected their belongings from the police.

Trevor Birney and Barry McCaffrey were arrested in August 2018 over the suspected theft of confidential files, shortly after the release of their documentary ‘No Stone Unturned’.

On Monday, Durham Constabulary dropped their investigation after a judicial review last week ruled the search warrants linked to the raids on the two journalists’ homes would be quashed.

Both men were released from police bail.

Sinn Féin MLA Gerry Kelly called on Durham Police and the PSNI to apologise to the journalists and the victims of the Loughinisland Massacre.

“This is a victory for freedom of the press.

“Durham Police has done the right thing dropping the case against Trevor Birney and Barry McCaffrey.
“This case should never have been pursued in the first place.

“The two journalists should be thanked for doing their job and providing a service to society by shining a light on state collusion in the Loughinisland massacre.

“They exposed British State involvement in one of the most notorious atrocities of the conflict.

“The police response was to arrest the journalists rather than pursue those responsible for the massacre and cover up.
“Freedom of the press is a fundamental principle in any democracy.

“The Chief Constables of Durham Police and the PSNI should apologise to Barry McCaffrey and Trevor Birney as well as their journalistic colleagues and the Loughinisland families.“

Durham Constabulary’s Chief Constable Mike Barton said: “Following the outcome of last week’s judicial review, a decision has now been taken not to progress the investigation into those two individuals and both will be immediately released from police bail.

“At all times, my officers have acted in good faith, within the law and followed due process. The warrant application was originally submitted to and approved by a county court judge. We do, however, accept and respect the decision of the High Court last week.

“We plan to produce a final report to the Chief Constable of the PSNI outlining all of our findings.”

In response PSNI Chief Constable George Hamilton said: “In 2017, PSNI became aware of an alleged theft and/or unlawful leaking of sensitive documents relating to the Loughinisland investigation from the Office of the Police Ombudsman. To ensure independence and address any conflict of interest I asked Durham Constabulary to conduct the investigation.

“I am grateful to Durham Constabulary and to Chief Constable Mike Barton for the work they have conducted on our behalf in this sensitive investigation. I have always accepted the autonomy of Chief Constable Barton’s inquiry and I fully concur with his decision not to progress the investigation into the two journalists Mr Birney and Mr McCaffrey.

“Throughout the period of this investigation, the horror of what happened in Loughinisland has never been far from any of our thoughts. The perpetrators of that crime have never been brought to justice and that is a matter of huge regret for policing.

“The police investigation into who murdered the six innocent men in the Heights Bar in 1994 remains open but progress is dependent on new information. There are people out there who know what happened. I would appeal to them to come forward and make a statement that will help us finally bring justice to the families of the victims.

“I am aware that the investigation over the last year has caused concern for families who have already suffered so much. That is something none of us would ever have wished to do.

“However, as a police service, the suspected theft or unlawful leaking of any sensitive documents containing information that may endanger life is a serious matter which we are statutorily obliged to investigate.

“Recognising the sensitivities, we asked an independent Police Service to conduct the investigation. The clarity provided by last week’s hearing has now brought a significant part of that investigation to a conclusion.

“I await the final report from Durham on this complex investigation.”