Love and peace for singer-songwriter Brendy 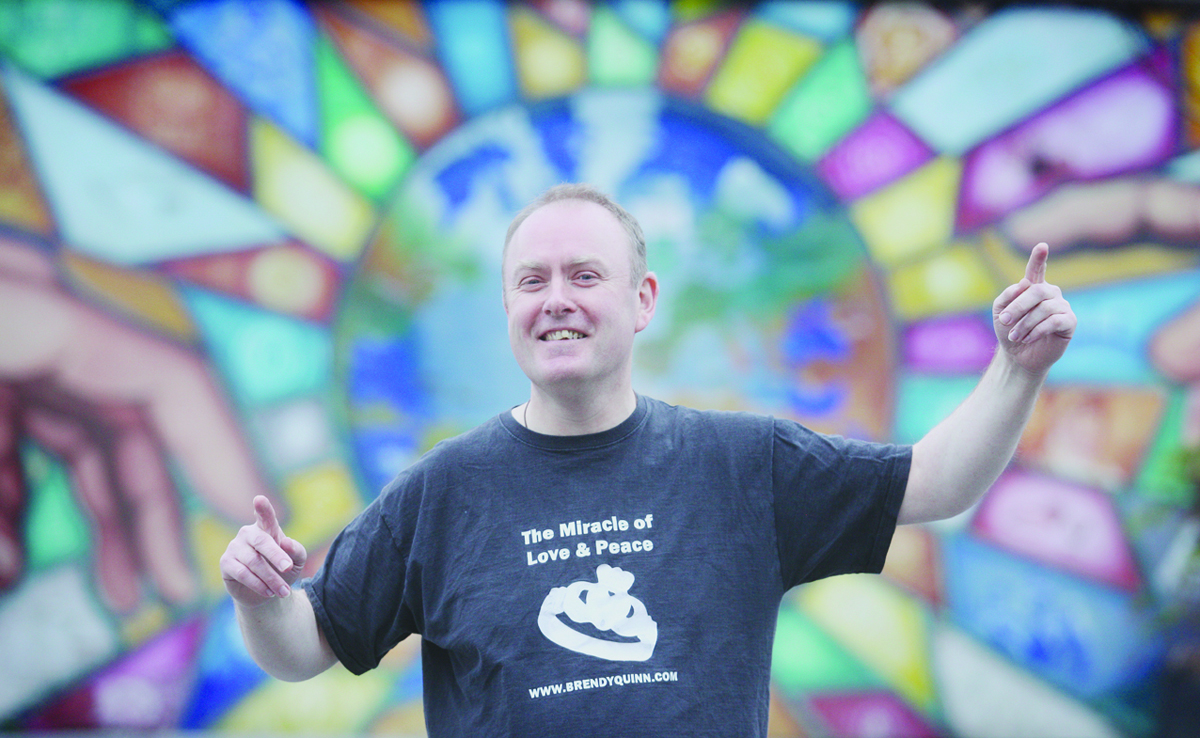 FESTIVE MESSAGE: Brendan Quinn from Cavehill is stressing love and peace this Christmas

LOVE and peace has been a prominent theme in the north since the worst of the Troubles has passed.

And that’s particularly true of one North Belfast singer-songwriter, for whom the theme is very relevant today in his songs and poems.

Cavehill man Brendan Quinn promotes peace, love and reconciliation in his work and said he’s taken an interest in the themes from a young age.

“Singing started from an early age when we were taught hymns in primary school,” he explained. “I then started listening to music on the radio and took a keen interest. The Boomtown Rats album was the first album I bought and was the first time I recorded myself singing over the top of it.”

Brendan then spent some time in Galway, a vibrant city full of culture and joy – a world away from the grim and fearful city of Troubles Belfast.

In 1992 Brendan wrote his first poem – ‘A Nation’s Plight With Peace In Sight’ – which was written to encourage healing and reconciliation as hopes of an end to the conflict grew.

“I had a spell in Galway and enjoyed the culture and arts in one of the fastest-growing cities in Europe,” he said. “It was a far cry from Belfast during the Troubles with shootings and killings. It was mayhem everywhere and I had to readjust to living here again.

“I was emotionally affected and it was then in 1992 when I decided to get my thoughts down on paper when I wrote the poem, A Nation’s Plight with Peace in Sight.

“I wrote a follow-up peace poem when things had calmed down, describing the new dispensation. I showed it to a community worker who advised me to get into songwriting and singing.

“I had a vision for love and peace, which was very much my dream.

“Things did improve and, in a way, I think I helped change a few minds in moving towards reconciliation,” he added.

The 52-year-old has just released his latest song, God’s Love, which develops his idea of love and peace further.

“My latest song is called God’s Love. I am a believer and so I believe God has a plan for each of us. I think our life is just a test.

“I’ve been focusing on the songs with my theme of Love and Peace. I believe if you can find love with a soulmate, it can lead to healing powers.

“I believe I have a talent for singing and songwriting. A well-known singer compared my work as a cross-over between Johnny Cash and Leonard Cohen, which was a great compliment.

“I think it’s important to be yourself and express your own thoughts and feelings. With any luck, I hope to help people in their quest for peace and love.”

Visit www.brendyquinn.com to listen to some of Brendan’s music and songs or to read his poems