Love & Light Arts Round-up: Put it to the People 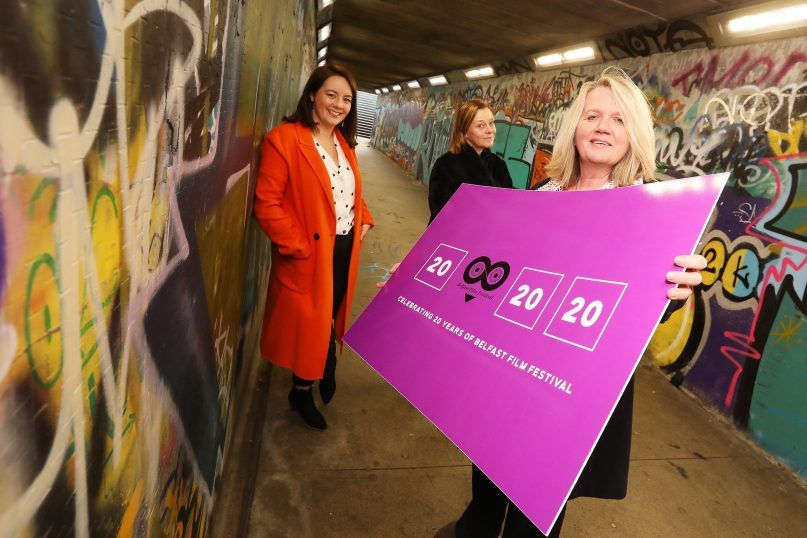 FILM FEST IS BACK (FINGERS CROSSED): Cathy Brady (director Wildfire) Alison Millar who is making a new doc on Lyra McKee (left) and Michelle Devlin, director of the Belfast Film Fest at the launch

What takes a person out onto the streets to demonstrate? How do they react once there?

Joy Gerrard has been obsessed for a number of years with demonstrations  and how the media depicts them in an urban environment. Her major new  solo exhibition at the Golden Thread Gallery 'Put it to the People' offers an expansive space in which to contemplate the monochrome difference in black ink of a Black lives matter demonstration in London to the Gilets Jaunes in Paris or a protest crowd for The North is Next demo in Dublin.

Her exquisite small Japanese ink drawings in the exhibition, some scaled up to larger works on linen, seem to move before your eyes.  The gallery is open Tuesday–Friday 11am-5pm Saturday 11am-4pm. Exhibition runs until November 20th.

With another lockdown in the works, of course, all of these opening hours may be imperilled.

One of the more positive outcomes of being at home during the pandemic has been the amount of creativity that has flowed across all age groups. Handmade rainbows have popped up in many windows across the city. The Mac is putting together an exhibition called a rainbow of coalitions and if you would like to participate, drop down your rainbow or If you are part of a school or community group they will come and pick them up. The Mac is open Wednesday to Sunday 10am-4pm. Exhibition opens 28 October.

'At an Uncertain Place, at an Uncertain Time' seems to describe everything at the moment but is the title of QSS Gallery’s new three person exhibition. Jonathan Brennan, Charys Wilson and Chris Wilson use  a monochrome palette and drawing, photographic and print techniques to explore the theme.

Jonathan’s chance discovery of negatives from early last century act as a starting point. Chary’s work is a lesson in using minimal white paint on black paper to dramatically  comment on climate change and its effect on insects.  Chris continues with his mapping obsession, topography lines that pulse before your eyes. QSS Gallery, The Arches Centre, 11 Bloomfield Avenue open Tuesday-Thursday 10am-5pm until 29th October

I do not often mention dead artists, preferring instead to highlight that art is a living, breathing contemporary matter but I do make exceptions.

If you’re interested in sculpture it’s worth visiting the Ulster Museum to see the maquette (small scale model)  of Elizabeth Frink's crucifixion for her beautiful sculpture that hangs over the alter in Saint Bernadette’s, Rosetta Road. The exhibition is called Elizabeth Frink and post-war art from the museum collection and closes on 18 October. (She also did Flying Figures, AKA Draft and Overdraft for the former Ulster Bank building at Shafesbury Square.)

While at the Museum  visit 'A Unique Silence' which includes etchings from Rembrandt that have recently became part of the Museum collection.

The Royal Ulster Academy annual exhibition opens Friday 16 and will show a selection of art from academy members and those selected from their annual open call. For the first time, the show will also be 100 per cent online. I bumped into Betty Brown President of the RUA while up at the museum as she shuttled between their real and online presence and sympathised at the learning curve and new ways of working that are currently being required everywhere.

Ulster Museum is open Tuesday-Sunday 10am-5pm. Tickets are free but book before you go. There is also a one-way system in operation which panicked me initially thinking I had to go through Ireland’s history and natural history before I could get to the art, but there are three routes to choose from and a new café.

Belfast Film Festival and Docs Ireland are swimming against the tide and although there are some online events for their month-long festival in November,  the majority of the films are located at cinemas.

You can, however, experience across several rooms of the former UTV studios at Havelock house 'The Occasional Man', an immersive film installation following the protagonist Duncan, a recently-retired Glaswegian embarking on a failed attempt to become an actor.

The audience will be guided through scenes from his disillusioned life. The piece is a collaboration between Sighle Bhreathnach-Cashell (Belfast) and Richard Martin (Glasgow). The audience will have timed slots between 6-9pm on Saturday 21 November email the organisers to book one for free. There is a wide variety of films on offer in the festival including  an opportunity to catch a work-in-progress  workshop about a documentary on Lyra McKee, a documentary on Martin McGuinness called 'I Fought, I Made Peace, I Made Politics' or, if it’s feel-good you're after, an evening immersed  in the cat videos. Hey, it takes all sorts. (See official trailer for The Sheriff at the Film Fest below.)