Lyttle calls on Reds to bounce back against Glenavon 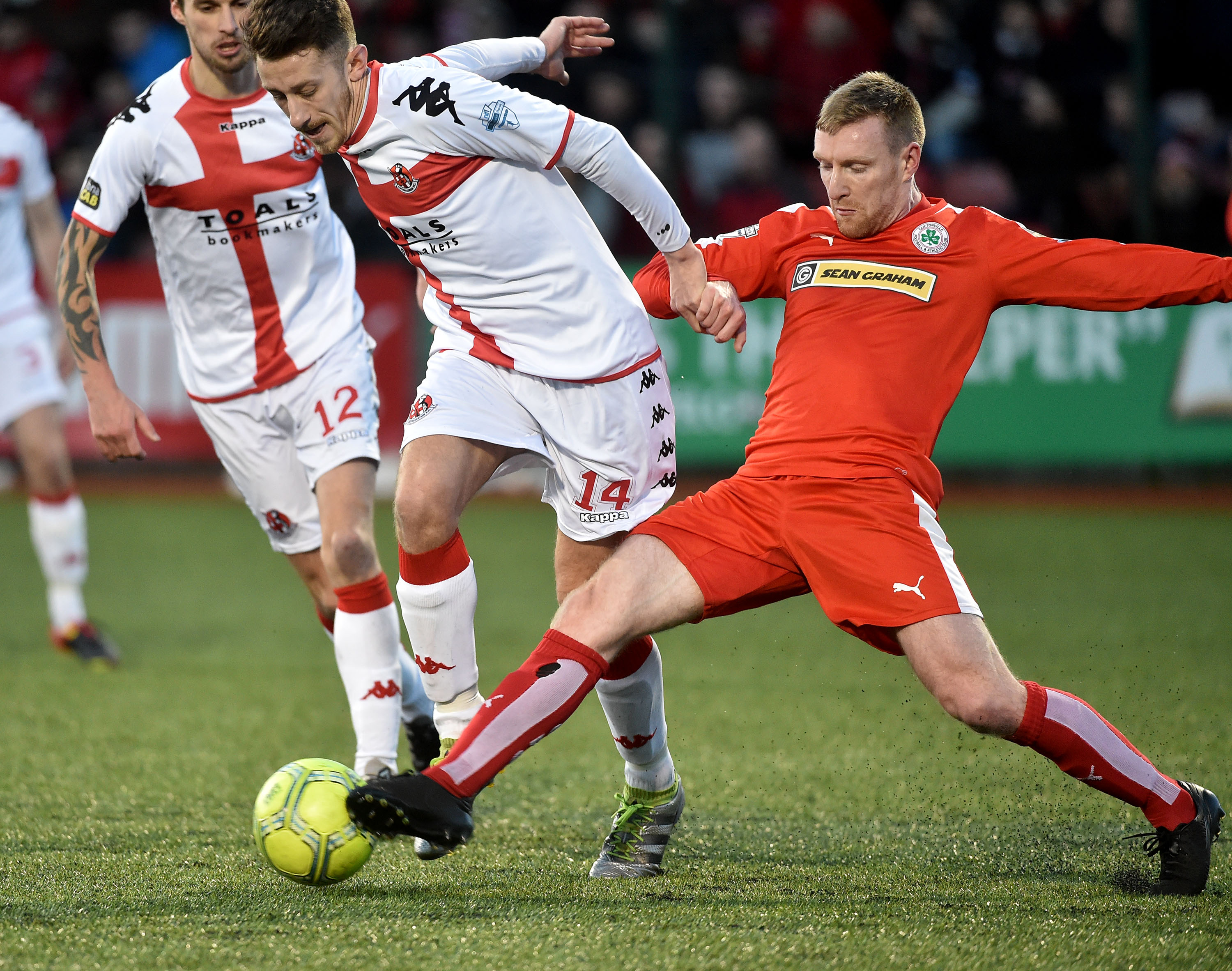 Cliftonville’s Chris Curran in action with Jordan Forsythe of Crusaders during the North Belfast derby on St Stephen’s Day. Reds boss Gerard Lyttle has called on his side to bounce back from their 4-0 defeat when they face Glenavon on Friday night

CLIFTONVILLE boss Gerard Lyttle has called on his depleted squad to bounce back from their Derby humiliation at home to Crusaders in the St Stephen’s Day derby as they take on Glenavon on Friday evening.

Lyttle admitted that he is having to play some of his players out of position to get through a crisis at the minute, but is urging his players to prepare well for their upcoming clash at Mourneview Park on Friday evening (7.45 kick-off) or they will be exposed by a Glenavon side who have already defeated the Reds twice in Lurgan this season.

“I don’t know what way we are going to bounce back,” admitted Lyttle. “Hopefully knowing the boys they will respond to it, the big thing for us is we are down to the bare bones. Its square pegs in round holes at the minute.

“I’m looking the boys to bounce back big time, I think they have to bounce back. “They can’t feel sorry for themselves, certainly we won’t be feeling sorry for ourselves as a coaching staff. “The players need to respond as well and we’ve told them they need to prepare right, if they don’t prepare right they’ll get found out and if they’re found out then they won’t be playing in the first team, it’s as simple as that.”

Lyttle is wary of the threat that Glenavon pose and hopes that preparations for the meeting with the Lurgan Blues will be better than that for the Crusaders game. “Glenavon are a good team,” said Lyttle.

“The big thing for us is this week, hopefully we can get bodies in and work on a few things.” Lyttle was incredibly frustrated with his side’s preparations for their humiliating Derby defeat at the hands of North Belfast rivals Crusaders, admitting that he only had 10 available players for training before the game as a vomiting big ripped through his in-form side.

“I’ll be truthful, I wasn’t too hard on the team after the game because preparation wise it was really really bad for us,” revealed Lyttle. “This week we had a bug which ripped right through the whole changing room.

“We hadn’t had anyone training. There was only 10 at training during the week, big (Jason) McGuinness had to stay away and at one stage his wife was calling an ambulance for him because he was hit that hard.

“Levi (Ives) hadn’t trained and you could see it out there. You probably look at them like they were out partying or drinking, they were done and losing Jude (Winchester) was a big loss because of how we play and as I say preparations leading up to the game have hit us hard and was poor.

“I’m not one to make excuses and I’m not going to make an excuse, at the end of the day Crusaders deserved their win. “After the second goal they battered us and we need to dust ourselves done now and not feel sorry for ourselves, go again and hopefully the boys will reflect on how the day went and how the week went building up.

“Ones were sick, but we’ve got to question whether we were preparing right for it so only the players will know that and it’s just disappointing obviously that on St Stephen’s Day, your biggest game and biggest rivals that to not only lose, we could have got beat five or six and thats the most disappointing thing.”

Lyttle admits that his ultimate target this season is European qualification given the changes he has had to oversee to the dressing room since the start of the season and believes the Crusaders result may serve to be the reality check that his side might need. “Truth be told, whether it be third place or not my target is Europe,” admitted Lyttle.

“Whether that is third place, Irish Cup, winning the league or second or whatever it is, that is our target and that’s being realistic. “We’ve had a big haul of change this season in terms of players, it’s been well documented that the changing room at the start of the season wasn’t right and we’ve had to change the mentality and try and find leaders within the group.

“I suppose it is a bit of a reality check now, maybe we did think we’ve arrived here and things can change so quick. “I said that to the boys, you’re up there one minute and get brought back down to earth quickly the next. It’s going to happen, we said it would happen, but obviously you don’t want it happen against Crusaders or a massive game.

“If you win that game today, its ifs buts or maybes you’re sitting three points off the leaders, but we didn’t and we didn’t deserve to win.”

Lyttle will be pleased that Daniel Hughes can return after serving his automatic one-game ban and will be eligible to play on Friday and Tuesday night at home to Carrick Rangers (7.45 kick-off) along with Jason McGuinness who is awaiting the outcome of his appeal on the red card issued against Portadown.