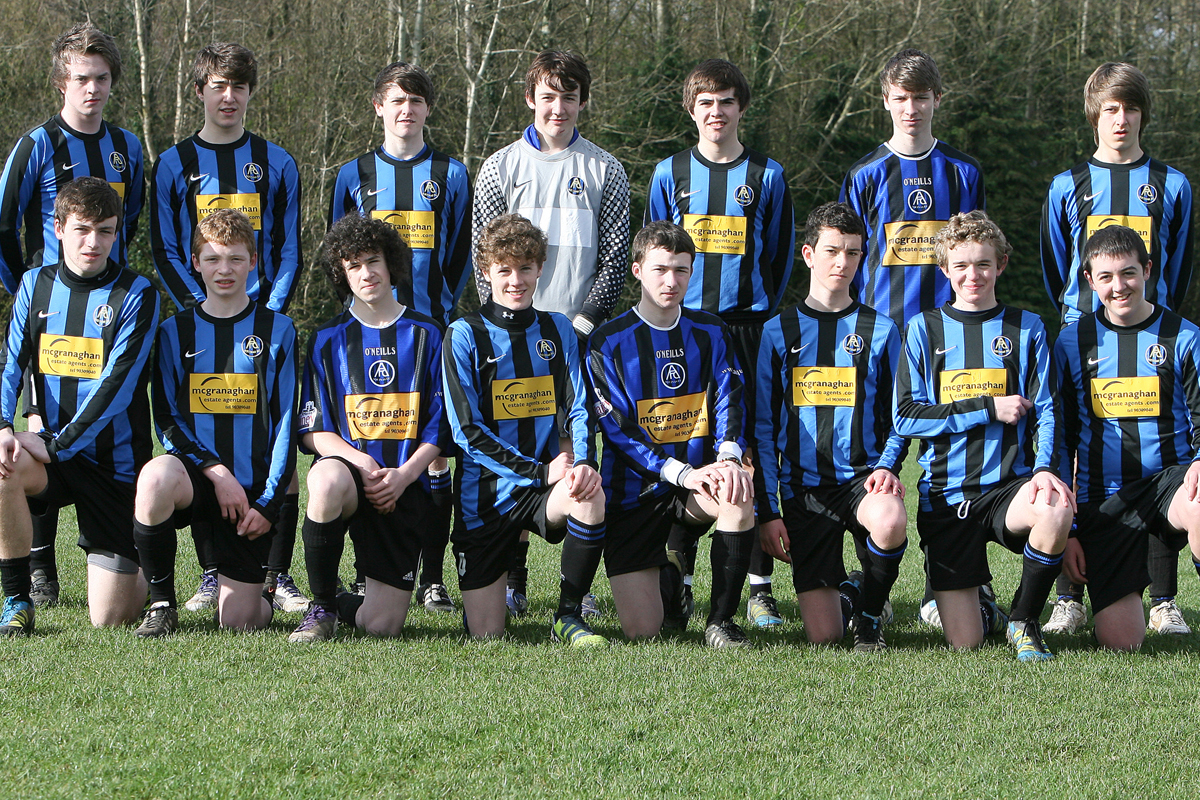 Spring was definitely in the air at Strangford Avenue on a sunny St Patrick’s Day morning as Aquinas overcame a decent St Oliver Plunkett side, thanks mainly to some ultra clinical finishing to which the West Belfast side had no answer.

Their tormentor in chief was Tom Maguire whose magnificent treble took him to an impressive 34 goals in a quite remarkable season for the classy front man.

The Blue ‘n’ Blacks laid the foundation for victory by dominating the physical contest in the middle third of the pitch during a tight opening ten minutes. Niall McCourt impressed as usual at the heart of the defence as Dan Rainey, moving in from his usual berth on the flank, delivered a masterclass in the role of sweeper behind him.

The deadlock was deservedly broken on 12 minutes when Maguire fired home having been sent clear by a defence-splitting pass from the outstanding Cormac O’Hanlon.

Plunkett’s main threat came from the pace and trickery of wide man Sam Walsh who was unfortunate to come up against accomplished left back Thomas Cafolla who nullified the threat throughout.

On 23 minutes Aquinas doubled the lead when Paddy O’Boyle expertly evaded a couple of challenges in the centre circle before feeding playmaker O’Hanlon who again picked out the run of Maguire and he kept his cool to find the bottom corner from 18 yards.

On the half time whistle the game was just about put to bed when Joe Cunnane, whose clever running off the ball had been a feature of the half, was upended in the box at the end of a jinking run. Ciaran Mohan confidently rattled in the penalty.

Little changed in the pattern of play in the second half as Aquinas enjoyed significant territorial advantage with Matt Carson at the heart of everything in midfield.

Maguire completed his treble midway through with a lovely left foot finish from a tight angle after great work from Hugh O’Connor on the right. The only blemish for Aquinas was when some indecision at the back contributed to a consolation goal ten minutes from time and nerves jangled for a couple of minutes as Plunkett briefly rallied.

Kevin McGovern pulled off a great save low to his right from a free-kick but back came Aquinas as Matt Hughes and Martin Beeton combined for the latter to fire narrowly wide from 20 yards before Peter Morgan instantly controlled a delightful pass from Conor Toner to notch the fifth and cap off a good day at the office.