MÁLA POIST: Ballymurphy families are an inspiration to everyone 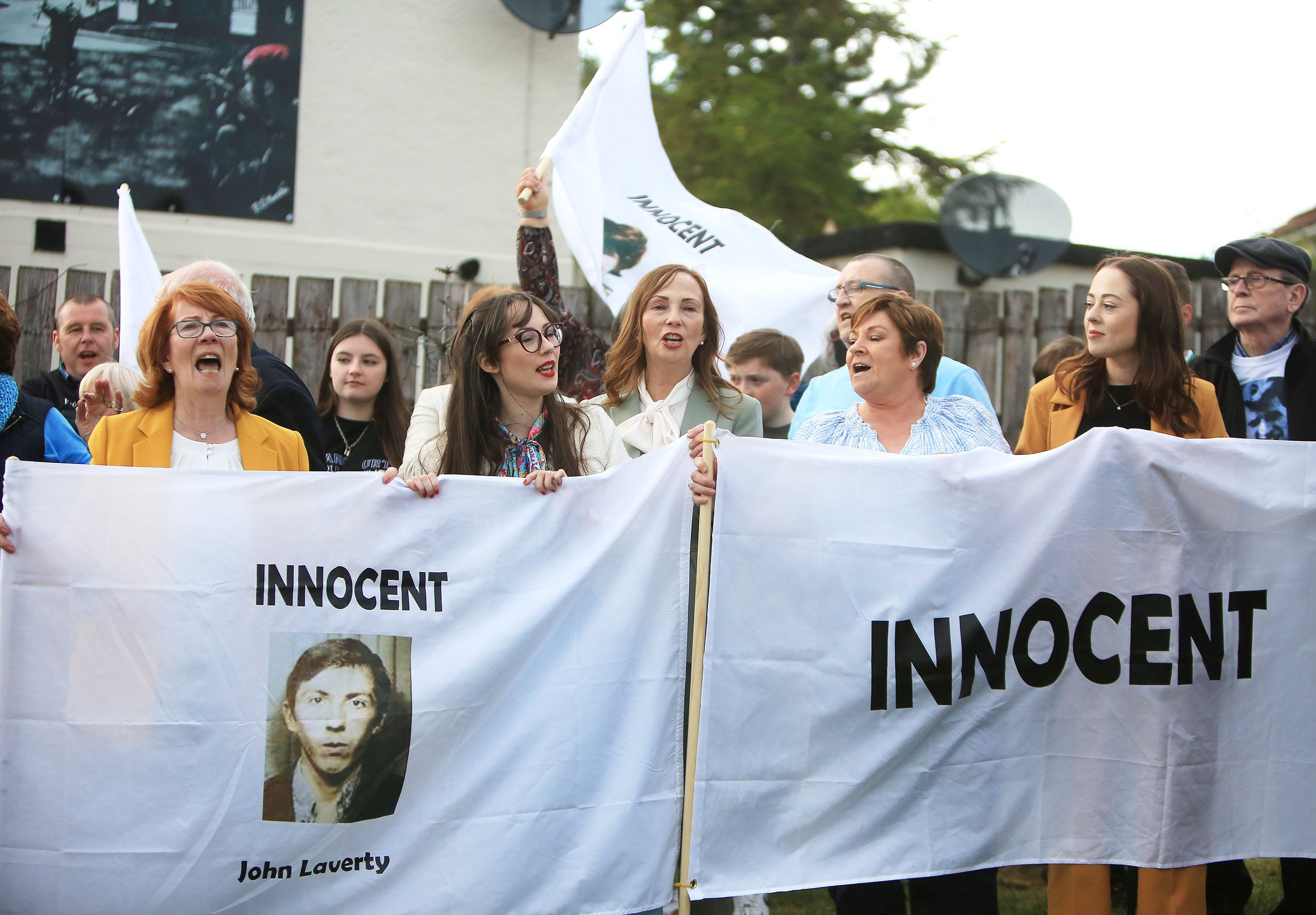 AS I sat in St Peter’s Cathedral on Tuesday 11th May awaiting the outcome of the coroners verdict on the massacre in Ballymurphy 50 agonising years ago, I was trying to imagine how all the families were feeling. As someone who followed the inquest over a long year, I was anxious. As I, to a certain extent, knew really in my heart what it is like to search for some truth and justice for decades.

The first time I suppose most of us heard about the terrible slaughter of innocent people gunned down by British Paratroopers was in St Mary’s Hall on the Falls Road, when members of the Ballymurphy families stood up one by one and told their brief stories of how their family members were gunned down.

So as I and hundreds more in the audience waited for the roving mike to go round the hall, my hand was raised right away, I spoke briefly about our brother Paul Armstrong, who was brutally tortured and murdered on 8th November 1974 by the UVF, he was just 18-years-old.

Over the years some people would say to me, Gerry why are you continually asking questions regarding the brutal murder of Paul? My answer is simple: If I don’t speak of Paul, then who will? I have been constantly told to forget the past, get on with your life, move on. Here is the stark reality: that night in St Mary’s College, if the families hadn’t spoken, would they have listened and heard the coroner without reservation find every single loved one they lost declared no threat to the soldiers, and that they were unarmed and completely innocent. They waited 50 years to hear what they all new, but now the world knows.

I would like to personally thank them all for their persistence in searching for the truth. Hopefully the justice will follow, you have all been a true inspiration to myself and many, many others.


• The changing face of the Lenadoon community in 2021

HAS anyone noticed the dramatic changes that have taken place across the whole of the Lenadoon neighbourhood this last number of years?

Sometimes you can be too close to a thing to notice such changes but to describe them as nothing short of remarkable would, I think, be an understatement. Take Lenadoon Stubb Block Flats for instance. They along with its residents were often ridiculed by local media as being Party Central despite the harsh social and economic stagnant living conditions that had been imposed upon their residents. To drive past them now and see what has replaced them would allow you to believe that remarkable progress has been made and that the community has indeed a bright future ahead.

Carrigart Flats once also similarly slighted has now bounced back after extensive investment from both the Building Successful Communities initiative as well as the Housing Executive with more investment planned for 2022. After close inspection you can clearly see that significant investment and improvements have been made and more will be needed. But a start is a start and the only way to go here is forward. With residents now having successfully implemented a successful waste management and recycling scheme maybe now others that do not live there will desist from thinking its okay to fly tip there.

With the Corrib Flats due for demolition to make way for new social housing this too will be another part of the jigsaw that will see Lenadoon brought up to the same standards of other areas across Belfast in 2022.

Traffic calming to make our streets safer for our children, along with landscaping and alley-gating, have all been investments which have been made to improve the overall living standards and safety of our residents.

To walk along the front of the shops and the side of Woodbourne Barracks ten years ago would have had reminded you that you were still in what was once a war zone and this area too is now unrecognizable as well as much safer since improvements following on from the death of local man Seamus Fox, RIP. Once again this was achieved by securing funding from multiple agencies.

Lenadoon (which never ever had a park despite its vast size) now has its own park which was a Millennium Project (2000) which replaced the last piece of unkempt green area in the estate and is now one of the best public parks in West Belfast.

The Half Moon Lake which was once a no-go area for fear of a repeat of past tragedies (Also a Millennium 2000 Project) has now, with the help of the Cairde Loch na Leathghealai and the extensive support and investment from Belfast City Council, became an oasis of tranquility for anyone wishing to visit. The Men’s Shed on a Thursday morning is one of the best in Belfast with expert tuition from Council staff and modern Resource Centre.

All of these achievements are a result of the partnership working between Lenadoon Community Forum, several residents groups and elected representatives along with the statutory providers and will provide a lasting legacy in the years to come for the community development work that has taken place.

FROM when I was a young boy I found myself involved in political activity and activism at some point. Some of it progressive, some of it mistakes. I am just glad I am not a bitter person. I have every call to be but I am not.

When I vote these days I vote on that person’s record in the community and the progress and change they make. I don’t vote on populist issues.

As some one who has been politically active from a young age I was extremely lucky to grow up in the West where wall murals that where beautiful taught me about international struggles and injustice. It is thanks to Sinn Féin some years ago that I have learned about standing up for equality and my very existence. This experience helped me later in the LGBTQ liberation movement.

For the last few years I have seen good things, progressive things in the community and on the streets from women standing up for their rights and LGBTQ people standing up with others, something we learned from the Late Mark Ashton and Tarlach Mac Niallais – two great activists, both local. Mark died from Aids in London and Tarlach from Covid in New York City. Both left radical ideals and taught us how important solidarity is and how one community must always give solidarity to another.

I am also very proud of the lads from the IRSP who are doing great community work in Beechmount. It’s amazing today to see so many young and not so young LGBTQ people stand in solidarity with others. Keep it up, it’s needed.

I don’t feel like the lone Rainbow warrior anymore, as I used to be the only one carrying LGBTQ flags and queer placards on demos and marches and on pickets in support of many progressive and liberation struggles, local and international. All my young life was caught up in political activism and I am still an activist but today I see the revolution in safe hands.

One thing that I have noticed today is that it is wonderful how many people are standing up for social justice  and international issues, but please use these issues as a platform for progress and change and not as a fashion statement. My first Gay Pride there was only 150 of us and the demo was attacked by cops and right wing groups. It reminds me of what’s happening in Poland today to Polish LGBTQ people. Now Belfast has nearly 50,000 people on Pride – that’s progress and change and I was part of that. My first Palestine demo I was not yet a teenager. I was dragged across Royal Avenue by the cops and my Palestine scarf ripped from me as they stopped us handing a protest letter into M&S. There was only 120 of us on that the demo. The last demo  I was on for Palestine there were thousands.

I don’t know what it is that has many young people politically active and even older people. A wonderful quote from Bobby Sands comes to mind: “Every Republican or otherwise has his/her own part to play. No part is to big, no part to small.”. Liberty, fraternity... Venceremos.

Yours in solidarity and comradeship.
Seán Óg Garland, Belfast 10