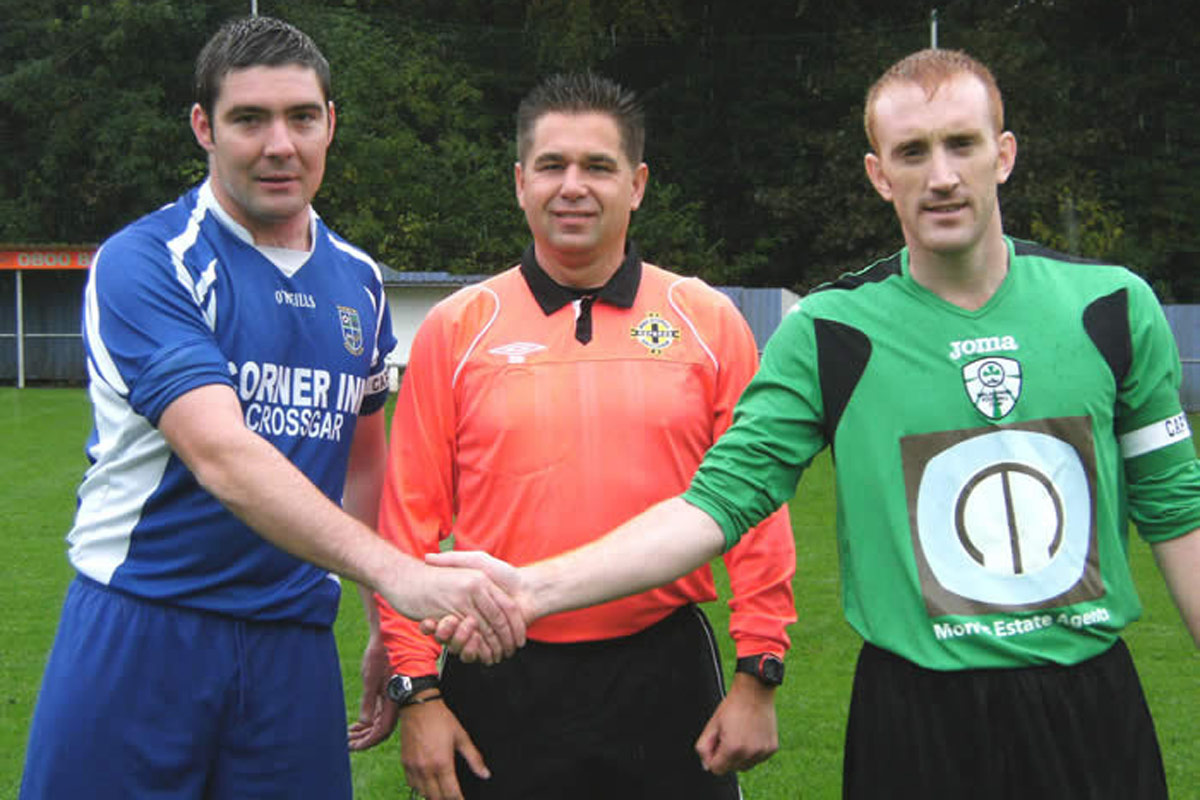 Malachians were left to rue missed chances as they narrowly went down 1-0 away to a resolute Kilmore Rec side at Crossgar.In difficult, sodden conditions Mals missed three glorious chances at the start of the second half, whilst Kilmore will point to three great saves from Mals’ man of the match, keeper Ciaran Stitt, and three goal line clearances.

With defenders Conlon and Adams unavailable, midfielder Cunningham still out, Mals had to once again shuffle their defensive line and started with Paddy Kavanagh and McDonagh at full back and a central defensive partnership of Sharpe and Stephen Devine.

There was also a Mals debut for Micky Collins who showed his pedigree throughout, with strikers McCourt and Moore starting up front.

The early pressure came from the home side which saw a great, early save from Stitt and an effort cleared off the line by Kavanagh.

Despite this Mals could well have been in front on 17 minutes when Moore’s effort went narrowly wide.

On 22 minutes the home side went in front when a simple long ball caught the Mals defence napping, allowing home striker Phillip Traynor to coolly finish.

Harsh words at the break had the desired effect and the team showed much more urgency and commitment throughout the second period.

There was an early half chance for Lowe before three great chances for the away side all went untaken within a ten minute period as Mals bossed the opening quarter of an hour.

First McCourt missed a great chance at the far post after a superb Moore cross and then a minute later McCourt could only head over with the goal at his mercy when home keeper Curran had parried a McAtee piledriver.

Somehow the travelling Mals support knew it wasn’t going to be their day when Lowe was again played in by a beautifully weighted Collins pass only to see his effort well deflected to safety.

Feighan then replaced McAtee on the left side for the away team as the game became tetchy.

There was another great save from keeper Stitt, Lowe cleared another off the line and Kilmore striker Liam Graham blazed a great chance over the bar.

Craig Faulkner came on for his Mals debut, replacing Kavanagh while Corr replaced captain McHugh but despite the late changes Mals could find no chink in the home side’s armour.

Despite the promptings of Collins and McHugh, wide men McAtee, Lowe and later Feighan struggled to make an impact.

Front men McCourt and Moore battled hard throughout against a tight defence but goals win matches and when Mals failed to take theirs when they came, it was an uphill struggle.

Mals face Ards Rangers at the Stadium of Sand this Saturday. Best for Mals: Ciaran Stitt.

Meanwhile Malachians II were beaten 3-0 after extra time in their Junior Shield fixture away to Downshire YM.

The seconds were led out by captain Marty McKee and goalkeeper John Murphy was man of the match.

The Shamrocks were beaten 3-1 away to Clifton Athletic despite a much improved performance which pleased manager Paul Fullerton.

The Shamrocks’ goal was scored by Allen Docherty while Paul ‘Storm’ Connolly got the manager’s man of the match award.