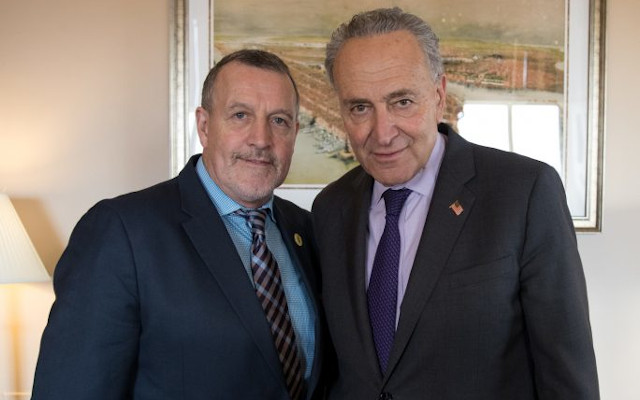 Two senior figures on Capitol Hill have taken aim at President Trump over the deportation of Belfast political asylum seeker Malachy McAllister. The Lower Ormeau man was flown home to Ireland yesterday in an Air Ambulance by Federal authorities — he had suffered a dislocated shoulder in a weekend biking accident.

“President Trump’s deportation of Malachy McAllister is profoundly unjust and serves no rational public purpose or positive benefit," he said.

“Mr. McAllister has been a valued member of the Irish American community ever since seeking asylum in the United States following an assassination attempt on him and his family during the Troubles. He is a father and grandfather to U.S. citizen children, a strong supporter of the Irish peace process and a productive businessperson. Mr. McAllister has unfairly faced deportation for years and the looming threat has been tragically realised today.

“For years...we have implored President Trump – and presidents before him – and U.S. Department for Homeland Security secretaries to intervene in McAllister’s deportation case. In the past, rational and just decisions to defer action have been granted. But, appallingly, not this time.

“The deportation of Malachy McAllister is grave injustice by President Trump. And, sadly, it is part of President Trump’s reflexively hardline and cruel immigration policy towards would be immigrants and asylum seekers that has caused untold pain and misery to countless people like Malachy McAllister, who, if allowed and granted some measure of mercy and common-sense administrative action, would only make America a better place.”

Adding to the furious political reaction to the deportation from the United States of Malachy McAllister, Congressman Eliot Engel, chairman of the House Foreign Affairs Committee, has expressed his outrage over the Belfast man’s removal from American soil and his New Jersey home.

And, critically, Engel indicated that he would work in the future to make possible McAllister’s return to America.

Said Engel in a statement: “I am outraged that the Trump Administration is kicking Malachy McAllister out of the United States. He first fled Belfast in 1998 during the Troubles and came to this country fleeing attempts on his life and the lives of his family.

“Now, despite strong bipartisan and bicameral advocacy from Congress about his model contributions to American society, Mr. McAllister is being forced from his home of more than two decades in the midst of a global pandemic and while he suffers from a broken collarbone.

“Malachy McAllister is a staunch supporter of the Good Friday Agreement and an invaluable member of the vibrant Irish-American community in New York and New Jersey.

“By following through with his removal, President Trump and Acting Secretary of Homeland Security Wolf are forcing Malachy to leave behind his American-born children and grandchildren and breaking with decades of bipartisan agreement across Republican and Democratic Administrations.