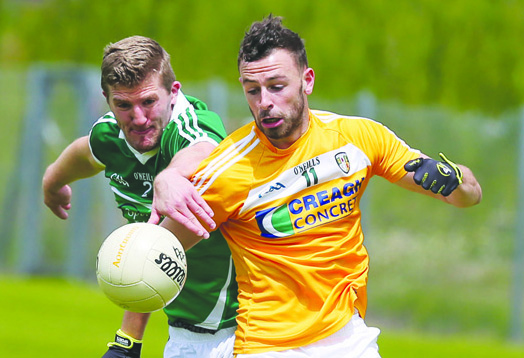 ANTRIM’S chances of upsetting the odds against Donegal in the Ulster Senior Football Championship have been boosted with the news that Matthew Fitzpatrick has successfully appealed his one-match suspension.

The St John’s ace was set to miss the clash in Ballybofey later this month after being retrospectively banned following an alleged off-the-ball incident in the tempestuous league meeting with Armagh back in March.

The Saffrons suffered a narrow two-point defeat in the Athletic Grounds but the game was marred by several clashes with Armagh’s Stephen Sheridan being sent off along with Antrim pair Conor Murray and Stephen Beatty. Orchard boss Kieran McGeeney was also hit with a 12-week ban arising from an incident with linesman Joe McQuillan.

While Beatty accepted a one-match ban, which ruled him out of the final league tie against Longford, both Murray and Sheridan appealed against their suspensions.

During the course of reviewing the footage from Armagh TV, Croke Park officials asked the Antrim county board to identify another offender in the background of the pictures.

A still image was sent to the county board and Fitzpatrick was identified by Antrim officials.

The St Mary’s student successfully appealed the original ban on the grounds that the still image provided by Croke Park was unclear and no player could be identified.

It was only when the Antrim county board identified the player for a second time that a fresh ban was issued and this led to a stand off with the Antrim players who felt Fitzpatrick was being harshly treated.

Fitzpatrick's second appeal was successful last night on the grounds that the evidence was inconclusive and the Sigerson Cup winner will be free to line out against Rory Gallagher's side on Sunday, May 21.

However, Antrim managers Frank Fitzpatrick and Gearóid Adams look set to be without former skipper Kevin Niblock for rest of the year after the St Gall’s ace suffered a recurrence of the knee injury which has blighted his season.

Reports that the talented playmaker is to retire from inter-county football are premature but his absence will be keenly felt against Donegal.

Antrim are also without Conor Murray after he was unsuccessful in his appeal against a two-match ban while his younger brother Ryan is struggling with a shoulder injury.