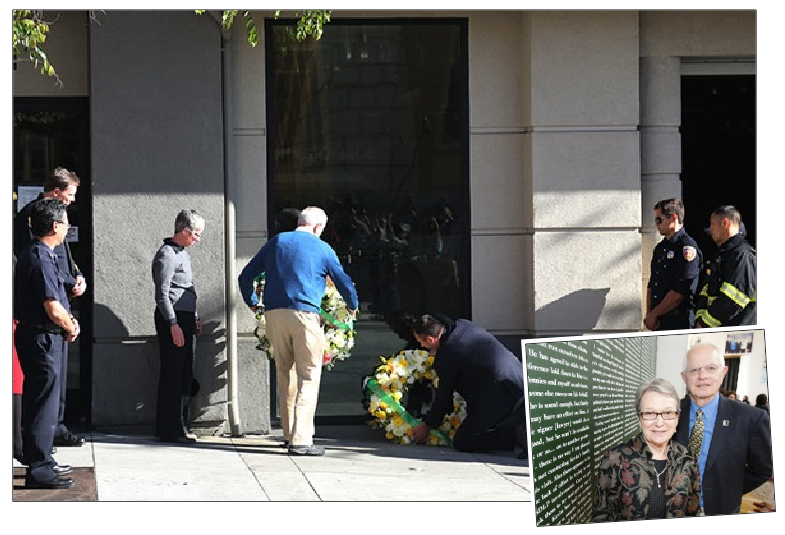 Mayor Tom Bates lays a wreath at the spot where six Irish students attending a 21st birthday party in Berkeley, California, fell to their deaths in the early hours of Tuesday morning; inset, Mayor Bates with his wife Loni Hancock on a visit to Belfast

The US politician at the centre of the Berkeley balcony crash which claimed the lives of six young Irish students is a long-time advocate for Belfast and for US links with Ireland.

Mayor of Berkeley City Tom Bates, who has addressed the world's media in the wake of the tragedy, visited Belfast in 2011 to attend the West Belfast Féile before travelling on to Derry and Dublin. His wife Loni Hancock, the most senior Senator in the State Senate of California and also a staunch friend of Ireland, travelled with him.

On Tuesday Mayor Bates joined the Consul General of Ireland in California, Philip Grant, to lay a wreath at the spot where the students perished . A bagpiper played a slow air and an Irish flag was draped over the wreaths at the close of the ceremony.

Mayor Bates expressed his deep sorrow at the passing of the six Irish students, who, like so many J1 Visa Students before them, had come to Berkeley lured by the excitement of a college town and the vast opportunities before them. “Our hearts go out to the Irish people, and particularly the parents,” he said. “We’re going to make sure this never happens again.”

Senator Loni Hancock is expected to propose the adjournment of the Californian State Senate on Thursday as a mark of condolence for the bereaved families and the people of Ireland.