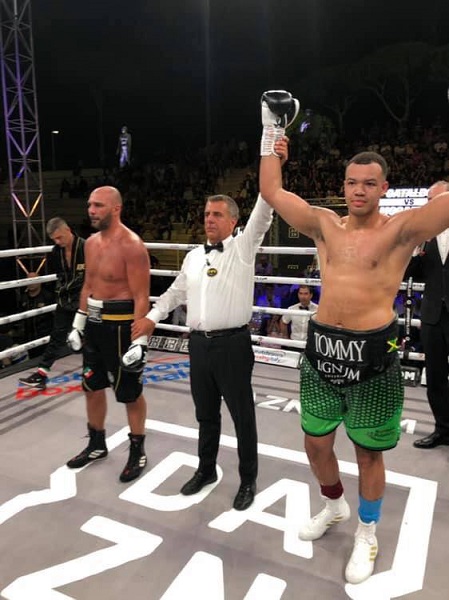 Tommy McCarthy was a winner in Rome this evening

TOMMY McCarthy improved to 15-2 as he scored a third round stoppage win over Francesco Cataldo in Rome this evening (Thursday).

The West Belfast man was initially due to face Fabio Turchi for the WBC International cruiserweight title on the night, but injury prevented the Italian from defending the belt and instead, Cataldo got a late call to step in and face 'Mac Attack' in an eight-rounder.

McCarthy needed just over two as a pair of knockdowns in the second effectively ended the contest as he kept his composure despite the disappointment earlier in the week to sound a warning to Turchi who he will hope to face in a rescheduled showdown in autumn.

McCarthy opened with some solid jabs to Cataldo's midriff as he initially tested the Italian before switching his stiff jab to the head.

As he found his range, he began to try and bring his right into play and looked to be getting into his rhythm as the opener concluded.

The second saw McCarthy pick up where he left off as a short left was followed by a right to send Cataldo to the canvas.

The Italian rose and was on his bike as McCarthy got back on his jab, but towards the end of a round, a couple of hooks to the body were followed by a big left behind the ear of Cataldo and while he covered up, a right on the gloves and left through the guard had him stumbling back and down.

This time, his legs seemed to fail him as he rose, but was saved by the bell although not his corner who stopped the fight as the bell for the start of the third sounded.

The win should now confirm McCarthy as next in line for Turchi with promoter, Eddie Hearn confirming in the week that it is likely to happen in September or October and the Lenadoon man will go into that full of confidence following his confidence-boosting victory in Rome.