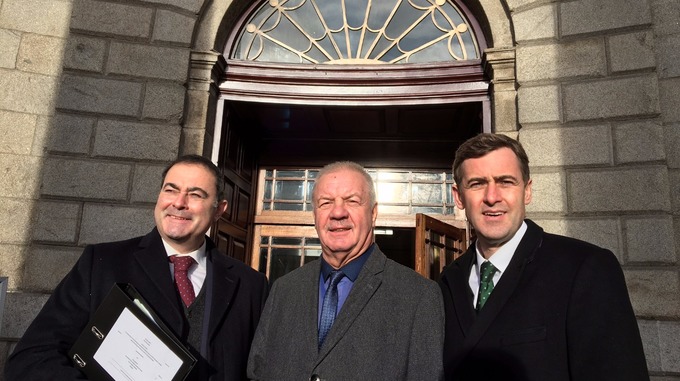 Victims’ campaigner Raymond McCord’s battle to remove the power of calling a border poll from politicians moved another step ahead yesterday after the High Court in Dublin granted him leave to seek a judicial review.

This follows a similar success in the High Court in Belfast in September with both cases to be heard in the New Year.

Raymond told Daily Belfast he was taking the legal action to stop a border poll being used as a “big stick”.

Currently, the calling of a border poll is at the Secretary of State’s discretion.

“If we win in Dublin then the Irish government will be forced to put in place legislation around a border poll and that will take it away from the politicians,” he said.

“When I went to court in September it was because it’s up to the Secretary of State to call a border poll but his party is in an agreement with the DUP, so how do we know they are not having an influence?

“Sinn Féin says they want a border poll and are trying to get a nationalist majority but both of the big parties are using a united Ireland to get their vote out and that’s taking away from the real issues.

“There’s the possibility that if Sinn Féin do well in the next Irish election they could be in government so would they be using political pressure to make sure there is a poll in the same way the DUP would be with the government?

“I don’t want the border poll to be used by politicians, plain and simple. What is needed is legislation to say that there won’t be a border poll until certain requirements are met and I am confident in the New Year we will be successful.”

The Belfast judicial review will be heard in January, with a date set in February for the Dublin action.

Raymond says he personally wants a border poll as soon as possible to “put the matter to bed”.

“I am a unionist and am confident a border poll would not be successful because I have nationalist friends who say they feel they are better off in Britain. I’d like to see one tomorrow because it’s become too much of a political issue. It would remove the fear factor.”