McCrory plans to use Bique bout as his shop window 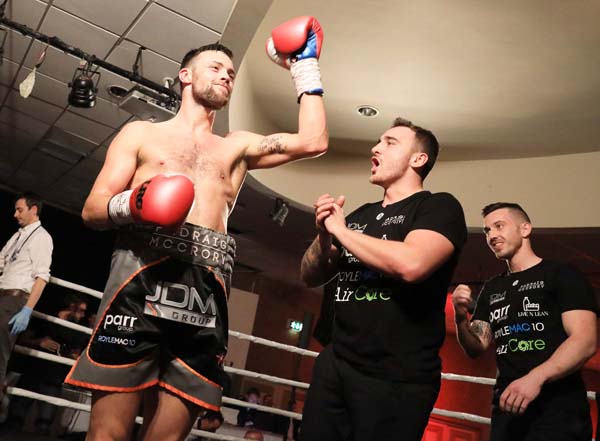 PADRAIG McCrory will hope to use Saturday’s rearranged clash with Manny Bique at The Devenish as an opportunity to put himself in the shop window for new management following his split with Kieran Farrell.

The St James’ man parted ways with the Mancunian and is now a free agent, but returns to the ring after a frustrating opening year as a pro against a man he was due to face back in December, but a cut in sparring to the Dublin-based Dominican forced a change of opponent with ‘The Hammer’ then facing and beating Michael Mora instead.

Bique returns as the man slated to be in the away corner this weekend and McCrory, who became a father for the first time four weeks ago, is excited to get back in the ring for what he hopes will be the start of a good 2018.

“It’s a busy time for me, but it’s great to get back in the ring again and try to get some consistent fights,” he said.

“My son is only four weeks now so it’s a different experience for me now in camp. My wife has been brilliant. Usually, when I was coming in from work I would take a quick nap, but now I’m coming home and the baby’s here.

“I was meant to fight him (Bique) the last time at the Devenish but it fell through. He’s a tough lad and ok, he might be 0-2, but he comes and earns his money. He won’t be here to lie down, but I have been working hard so I can’t see anything else but a good win.”

As well as a third pro win this weekend, McCrory will be hoping he can attract the interest of new management and he reaffirmed his commitment to taking on all-comers.

With so many MTK Global boxers on Saturday’s card, it is natural for McCrory to have an interest in joining their ever-expanding stable given the huge opportunities and big fight nights that entails, so he is hoping his performance catches the eye this weekend.

“At the minute my main aim is to find a new manager,” he confirmed.

“They (MTK) are going to be involved in big shows here with Frampton, with Barnes, with Mick Conlan coming back so there are big nights ahead for Belfast.

“I have a good following and I’m willing to fight other prospects, so I think there are opportunities there with shows being held all over Ireland.

"I don’t want to put all my eggs in the one basket, but if you’re a young boxer in Ireland at the minute, MTK are who you want to be with. But we’ll look at that after this fight and hopefully everything goes well, I get a good win and look good doing it.

“The last show there were a few MTK lads on and I did well. I brought a big crowd and put on a good sow. You had Carl Frampton Tweeting about it and stuff.