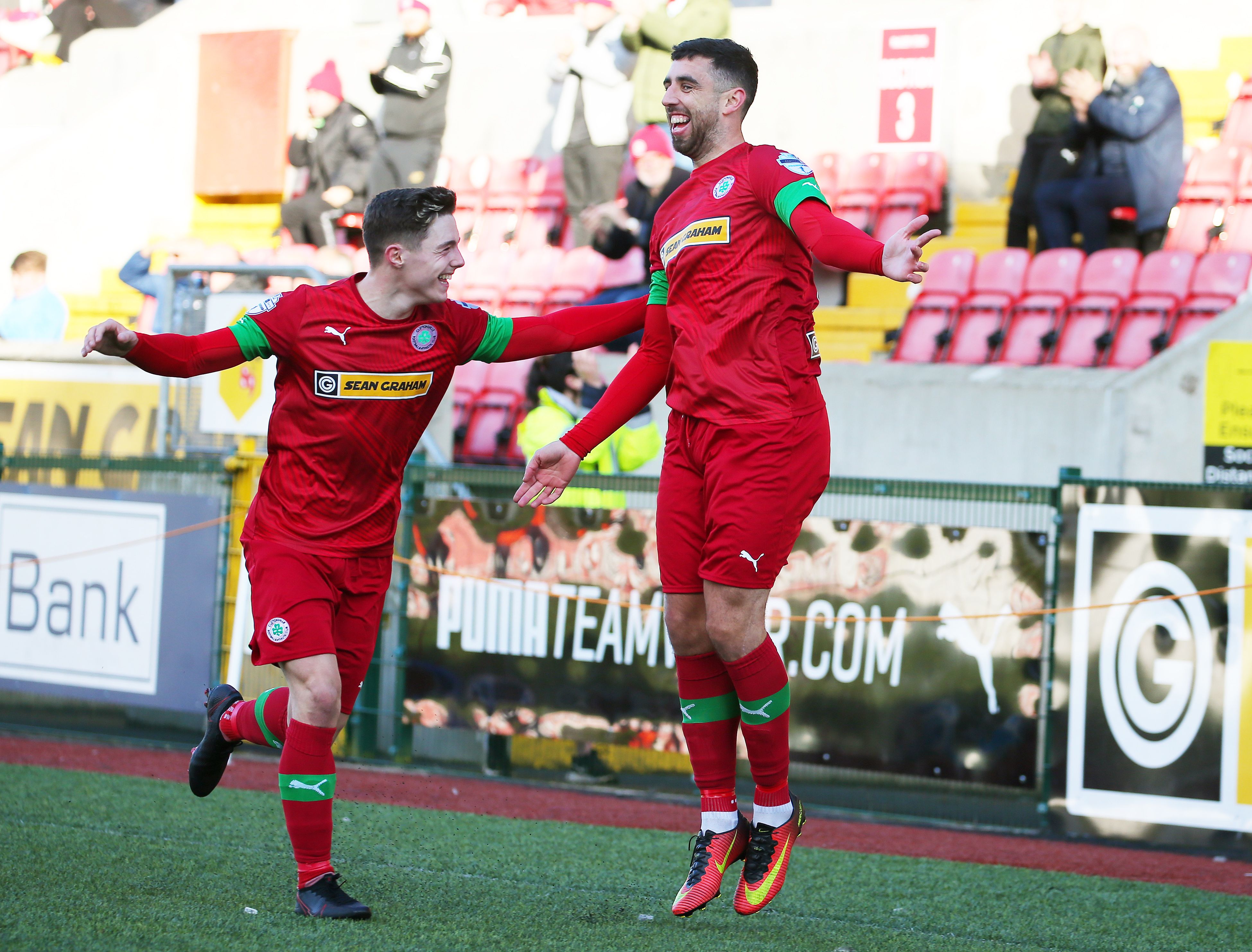 Joe Gormley celebrates after scoring the winner against Knockbreda on Saturday

CLIFTONVILLE manager Paddy McLaughlin is expecting another tough examination in the form of Dundela in this evening’s County Antrim Shield Quarter-final clash at Solitude.

Colin Nixon brings the East Belfast club across the city looking to claim a Premiership scalp and McLaughlin is under no illusions that the Reds will face a hungry outfit – one he believes will fancy their chances of promotion from the Championship this season.

“Dundela are a really good side,” admits McLaughlin.

“They’re one of the sides that will probably fancy their chances of going up in the Championship.

“There were some good sides down there. I’ve been in the Championship for long enough and have seen they’re definitely one of the better sides in it.

“It will be a tough game and a good experienced manager like Colin Nixon. He’s had a brilliant career in the Irish League and he knows what it takes to win games no matter who he is in charge of. I’m sure it will be another tough match but it’s one we’ll look forward to.

“We’ve had a couple of knocks and injuries coming off, the squad has already been stretched so we need to be careful in terms of what we do on Tuesday night.”

Ahead of tonight’s encounter, McLaughlin fired a stark warning to his stars that he won’t be afraid to give youngsters the opportunity if the standard is not being met.

Odhran Casey was a half-time substitute in Saturday’s 2-1 victory against Knockbreda and his manager felt the younger performed well in role and gives him some food for thought going forward.

“The players have a responsibility when they represent the club and they put on the jersey - they don’t take it for granted,” McLaughlin insists.

“They were told that at half-time and I think that’s what was wrong at half-time. I think in the first 45 minutes we took our positions and places in the team a wee bit for granted, which won’t be the case.

“We’ve proved that in the past, it doesn’t matter how many times you’ve represented the club or what your stature is at the club; if you’re not doing your job you’ll lose your place because the younger players are good enough to take it.

“We saw that with Odhran Casey coming on and playing at right side of centre back at 18-years of age. I thought he was superb and I think it’s something we have to consider seriously going into the future.

“The players were reminded that they’ve a duty of care and a responsibility and a standard they have to meet to play for this team and they didn’t meet it in the first-half. We were happy with the response in the second-half.”