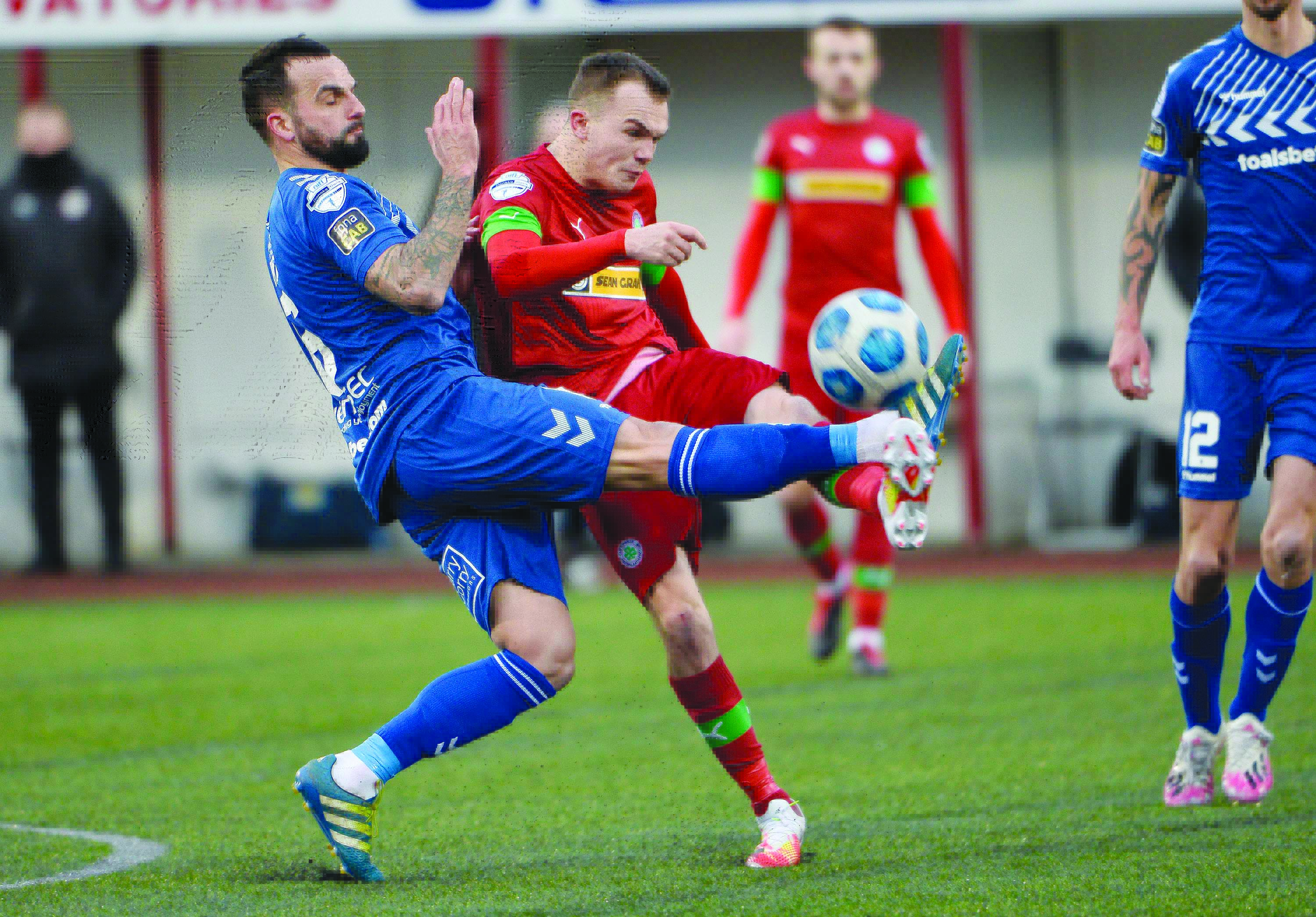 CLIFTONVILLE manager Paddy McLaughlin is looking forward to the prospect of the league beginning again at the weekend after the recent circuit breaker.

Having started back to training again on Monday evening, The Reds are scheduled to make the trip to the Warden Street Showgrounds to take on Ballymena United on Saturday afternoon (3pm kick-off) and the Cliftonville boss is very much looking forward to getting back down to battle.

🎥 Ahead of Saturday's game at The Showgrounds, Cliftonville supporters are advised that Ballymena United operate an independent streaming service which you will have to register for if you wish to follow the action live.

“We’re looking forward to getting back to action,” confirmed McLaughlin.

“We were starting to find a bit of form on the back of two decent results. We were a wee bit disappointed at conceding a late equaliser against Crusaders but there was a lot of good in the performance: work-rate and the intensity of the boys and we were showing signs that we were back at ourselves again.

“The break mightn’t have been great timing for us but it was probably called for with the spike in cases as it wasn’t safe and we didn’t want to put anybody’s health at risk.

“It was good to get the go-ahead to start back this week and also good to know that testing will start on a regular basis for the next four weeks. It puts people’s minds at ease in terms of training and coming to play.”

Last week agreement was reached to NIFL and the IFA provide four weeks of testing for players and officials involved in the games as McLaughlin outlined.

“Everybody involved will be tested on a Thursday, two days before the game and rightly so,” he explained.

“Fair play to the league and the IFA for supporting the clubs because we needed it badly and it’s good to see that everybody is back on board again.”

McLaughlin has seen a marked improvement within the squad since the turn of the year and pinpoints the arrival of Rory Hale and Aaron McCarey, believing the duo have had an impact on the training pitch and during games.

“The boys in the last couple of games and training sessions have been showing signs that they are getting back at themselves,” insists McLaughlin.

“The intensity and quality of our play has definitely gone up and it’s probably no coincidence that it’s happened since Rory Hale and Aaron McCarey have come in. They’re two players whose own levels and standards are high and I think that’s rubbing off on players already.

“When we play at top gear we are as good as anybody, so having players like that on the pitch and leading from the front, it’s no coincidence that since they’ve came in the levels have went up from the other players as well.

“We always knew Rory’s quality. He’s been in the Irish League for a while and I’ve watched him at Derry City and I always thought he was one of the best players in that position . It didn’t work out for him at Crusaders but that’s football. We were delighted to get him board and he’s shown already that he’s got that quality that we knew he had.

“I thought it might have taken him a couple of weeks to get up to speed but he has hit the ground running. If he can build on that and also improve the people around him then he is going to be a fantastic signing for us.”

Whilst the action resumes this weekend, it will do so with no fans in attendance.

The Cliftonville manager hopes they can be back in the grounds sooner rather than later to witness the impact Hale has had on the team.

“Hopefully the sooner the supporters are back in the better and then they can see up close how good a player he (Hale) is and what he brings, not just to his own game, but others like Ronan ‘Olly’ (Doherty) and Liam Bagnall against Crusaders last time out,” McLaughlin continued.

“The three of them together were superb in the middle of park. He’s added to their game as well as his own and he’s got that leadership and quality that not many possess in the league.”

Following Saturday’s encounter with the Sky Blues, Cliftonville welcome Linfield to Solitude on Tuesday evening (7.45pm kick-off) in the first of what could be a busy midweek schedule in the coming weeks with a lot of fixtures to be rearranged.

McLaughlin is hoping for a realistic fixture schedule that will take into account the part-time status of the league.

“It’s going to be a tight schedule surely,” he acknowledges.

“We haven’t got the biggest squad in the league and we’re not blessed with the resources and numbers that other teams have but what we have is quality.

“As long as the league is realistic when they are rearranging the fixtures and  they don’t set the demand on part-time players that they’re playing two-games a week for the next five or six weeks.

“The demands will be high in the next couple of weeks because there are a couple of midweek games over a prolonged period of time and it will hurt those sides that haven’t got those numbers or a full-time set-up, but as long as the league is realistic I’m sure we’ll be fine.”

The bad new for the Reds is that star striker Joe Gormley will be on the sidelines for an extended period having suffered a broken elbow at training on Thursday.