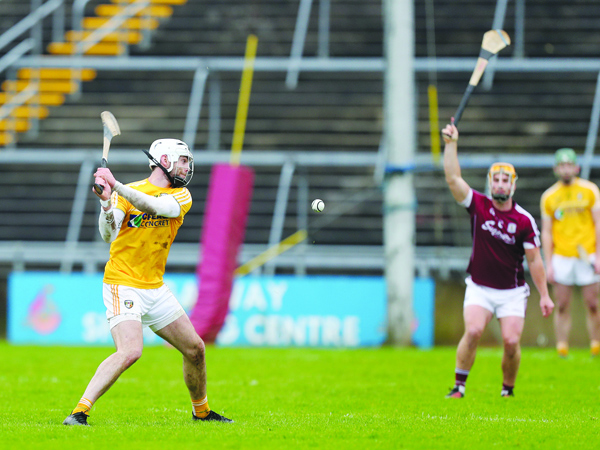 Antrim’s Neil McManus, pictured in action during last Sunday’s NHL defeat to Galway in Pearse Stadium, is hoping the Saffrons can build on their positive start to the campaign when they host Dublin at Corrigan Park on Sunday afternoon

MORAL victories won’t be good enough to keep Antrim in Division 1B stressed Neil McManus ahead of Sunday’s second round tie against Dublin at Corrigan Park.

The Cushendall native was speaking after turning in an inspirational performance as the Saffrons gave defending league and All-Ireland champions Galway a major scare in Pearse Stadium last Sunday.

Written off by many before the game, Antrim led by three points inside the closing 10 minutes before being overtaken by the Tribesmen, who won 1-19 to 1-16 in a thrilling opening game.

While many were quick to praise the exploits of Antrim, McManus was crestfallen after the full-time whistle.
“You get no f***ing points for that – we should have gotten something out of the game,” said McManus.

“That was a huge effort from our lads, but they aren’t All-Ireland champions for nothing.
“We are under no illusions, they are only starting to build themselves up again. They are a top quality side and they were able to bring some fantastic hurlers off the bench.

“You have to look at the positives. Matthew Donnelly at centre back was outstanding. Some of the younger boys too, Conor Johnston, Gerard Walsh at midfield. They were backed up by some of the old lads, Aaron Graffin, Conor McCann.
“Guys off the bench like James Connolly and James McNaughton added something to it as well.”

As one of the most experienced members of the squad, McManus has been around the block to see Antrim at their best and their worst over the last decade. Sunday was one of the good days.

Despite the loss of over half a dozen key players from last year’s panel, including Paul Shiels (retired), Simon McCrory, Niall McKenna and Ciaran Johnston, Antrim put Galway to the pin of their collar in Salthill.

“I see it as my role and some of the other older lads to leave the county in a better place than we found it,” added McManus.
“We put in a massive effort out there. I never went anywhere in my life just to make up the numbers. I don’t think anyone in the changing room has that idea either. At the end of the day, we have to points on the board. We asked for a performance and we got it.

“There are guys in that changing room who are dying to work hard for Antrim. I didn’t have to speak at half-time, it is great to be involved with a group of players who are as ambitious as that. We have a massive game against Dublin now. We need to get some points on the board.”

While Antrim led by three inside the final 10 minutes last Sunday, Galway’s experience and guile saw them through as they outscored the Saffrons by 0-7 to 0-1.

With the likes of Joe Maskey, David Kearney and Donal McKinley making their first league starts, Antrim’s collective performance was all the more noteworthy.

Yet, McManus bemoaned a lack of ‘cuteness’ in the closing minutes which could have disrupted Galway’s momentum.

“The players they brought on gave them a wee bit of impetus, there’s no doubt about it,” said the Cushendall ace.

“We probably could have been a wee bit cuter and disrupted the play. That’s another thing we have to learn. During the last passage of play, we had two or three players hounding every Galway player. That shows the passion and hunger.

“We coughed up some easy scores, but we delivered a performance.”

The challenge for Antrim now is to replicate last Sunday’s showing when they welcome Dublin to Corrigan Park.

An unplayable surface at Dunloy has forced Antrim officials to move Sunday’s game to the Whiterock Road venue and the home side may have to brace themselves for a backlash from Pat Gilroy’ side.

Offaly caused a big upset last Saturday night when they claimed a 2-25 to 1-15 win at Croke Park over a youthful Dublin side.

“Dublin are aiming for July, August, September with the effort they are putting in,” stated McManus.

“At the end of the day, Offaly have a new man in with Kevin Martin and maybe that was them announcing themselves as a big team again, I don’t know.

“I don’t think Saturday’s result or our result against Galway will matter too much next week. We would read too much into the results and we will just prepare for it as best we can. We’ll train hard this week and, hopefully, we can deliver another performance of that standard.”