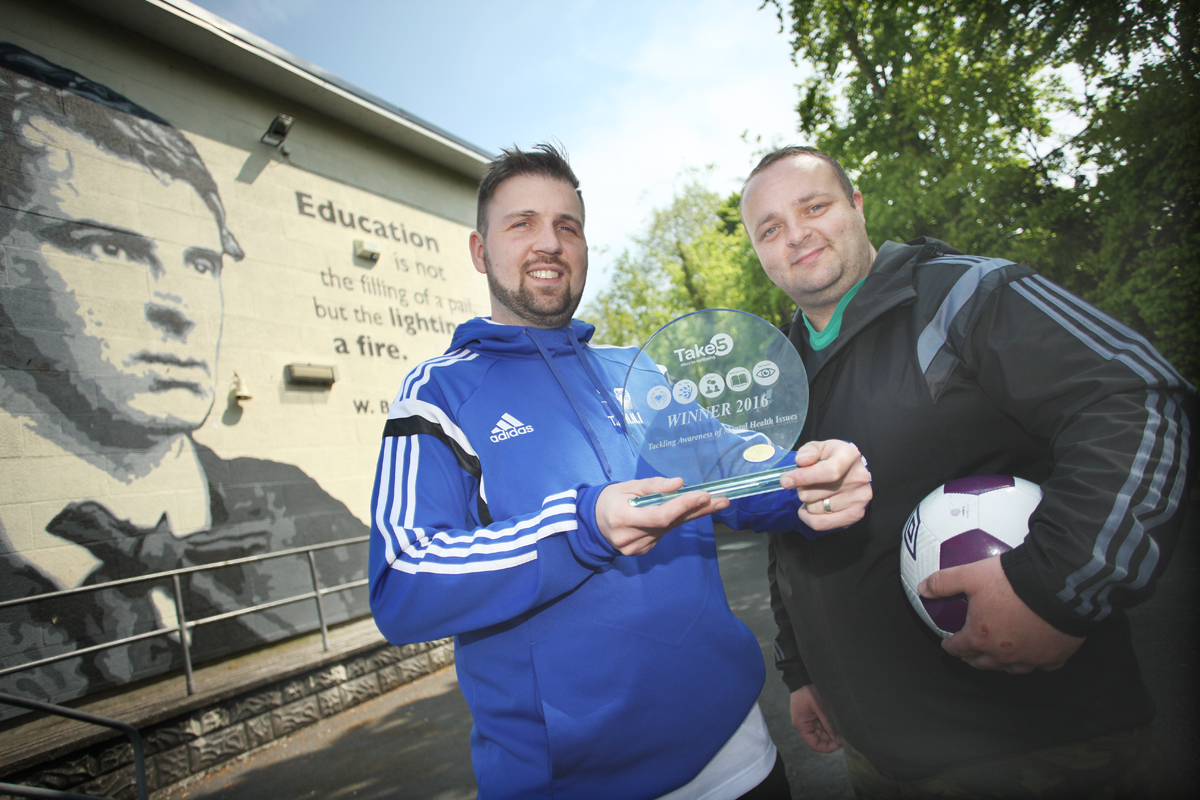 A MENTAL health awareness charity is using the power of sport to promote positivity in North Belfast this month with a series of events.

Set up by Joe Donnelly and Stephen McLaughlin in memory of Thomas McLaughlin, who took his own life in 2009, the TAMHI (Tackling Awareness of Mental Health Issues) charity was founded in 2011.
The New Lodge-based mental health charity works with sports groups in North Belfast and across the city and is the only activity and sport-focused mental health charity in the north working to raise awareness and tackle the stigma of the growing issue of mental health in the local community.
A cross-community football tournament, which was held at Girdwood Community Hub in North Belfast, was the first of a number of events which have been organised by the charity in June to raise awareness of mental health.

The event saw the soccer community in North Belfast and beyond come together to support a New Lodge family whose son has cerebral palsy and is in London for a life-saving operation.
Local club Ardoyne FC were crowned the overall winners of the tournament with fellow North Belfast side St Patrick’s FC the winners of the Gary Brown Cup.

Organiser of Saturday’s event, Joe Donnelly, said: The tournament was very competitive and the standard of play was outstanding. I cannot thank each and every club enough for coming along to this event and making it a great day. The money raised will make a massive difference to a family going through a very challenging time.

“Sport is reflective of our society as a whole and therefore it is important that sport addresses the importance of promoting a positive mental fitness for all.

“The World Health Organisation estimates that one in four of us will experience a mental health illness at some point in our lives.

“Participating in sport has a positive contribution to make to a person’s welfare if their experience is one that reflects the positive values of sport,” he added.

TAMHI’s approach is to promote positive mental fitness, raise awareness of issues that affect mental health and to tackle the stigma and break down barriers through sport.

TAMHI has been involved in a number of success stories since its formation in 2011, including the opening of Girdwood Community Hub in March 2016 which will be used for a number of sporting events organised by the charity.

The charity was also involved in one of its most successful projects to date with the Street Games in the New Lodge community in May 2015 which saw a number of local sports, community and voluntary groups in a local youth centre introduced to various programmes and project activities as part of the games.

The New Lodge charity was also awarded a prestigious award for their work in the community recently.

TAMHI was awarded the Take 5 Legacy award for wellbeing at the City Hall, in an event hosted by then Lord Mayor Arder Carson and organised in association with the Belfast Strategic Partnership.
Joe Donnelly added: “TAMHI won this award for the work the group has done with clubs around raising awareness of the Take 5 for Wellbeing message and the positive role the sport community has in championing it.

“I want to thank St Patrick’s FC for the original nomination and the Lord Mayor for a great evening. I also want to acknowledge Irene Sherry and Jim Morgan from Belfast Strategic Partnership for recognising TAMHI's efforts.

“Things like this give you that boost in confidence that TAMHI is making a difference,” he added.
A number of other TAMHI events will take place later this month, including a football programme with the Simon Community in the Waterworks and the Girdwood Cup, a key event in the calendar of the Girdwood Peace and Reconciliation Centre.

TAMHI is certainly shaping lives, changing lives and saving lives in North Belfast and beyond.