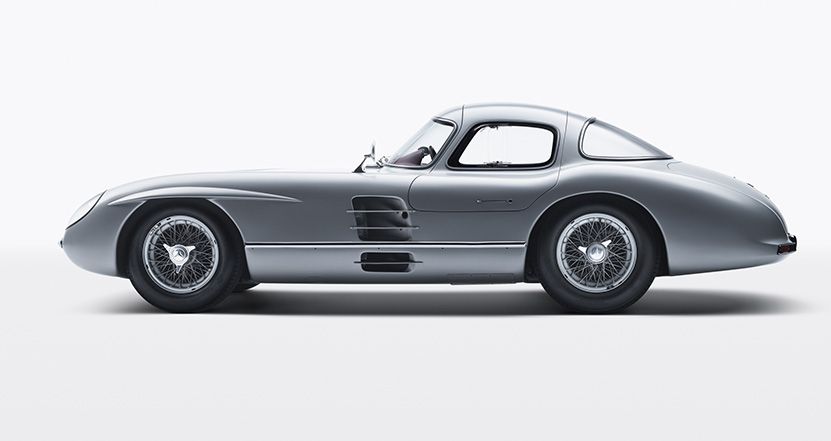 JUST when you thought it was safe to go into a used car showroom, a 1955 Mercedes-Benz 300 SLR Uhlenhaut Coupé built in 1955 has been sold at auction for a record price of €135,000,000 to a private collector. The car, which is one of only two created, and has always been regarded as one of the great jewels of motoring history, but few ever imagined that it would be offered for sale.

The car is named after its creator and chief engineer, Rudolf Uhlenhaut, and is considered to be one of the finest examples of automotive engineering and design, often cited as being ‘the most beautiful car in the world’ by automotive experts and enthusiasts worldwide.

The remarkable 300 SLR was based on the hugely successful W 196 R Grand Prix car which won two World Championships in the hands of Juan Manuel Fangio, but with its engine enlarged to 3.0 litres for sports car racing. The car was capable of 180 mph, making it one of the fastest road legal cars to have ever been created at the time.

The sale of the 300 SLR took place on May the 5th at an auction held at the Mercedes Benz Museum in Stuttgart, with Sotheby’s working in close cooperation throughout the entire process to ensure the sale was concluded to the highest possible standard. Among the invitees were selected Mercedes customers and international collectors of cars and art. The winning bid was an incredible €135,000,000, making it the most valuable car ever sold and exceeded the existing record by more the €90,000,000. In what felt like a surreal experience, the bidding opened at a price higher than the selling price of the car previously ranked as the most valuable ever sold at auction. The 300 SLR now sits in the top ten most valuable items ever sold at auction. The proceeds will be used to establish a worldwide “Mercedes-Benz Fund” that will provide educational and research scholarships in the areas of environmental science and decarbonisation for young people.

“We are proud that we can contribute with our historical collection to this initiative connecting the past with the future of engineering and decarbonisation technology”, says Marcus Breitschwerdt, Head of Mercedes-Benz Heritage. “The private buyer has agreed that the 300 SLR will remain accessible for public display on special occasions, while the second original 300 SLR Coupé remains in company ownership and will continue to be displayed at the Mercedes-Benz Museum in Stuttgart.”

Speaking on behalf of RM Sotheby’s, Peter Wallman said: “Words can’t really do justice to the importance and significance of this sale. It’s reasonable to say that nobody ever imagined that this car would ever be offered for sale, so for Mercedes-Benz to ask RM Sotheby’s to conduct the auction was an absolute honour.” What a car!

A bumper weekend for motorsport fans

In the NIRC Carnmoney’s Derek McGarrity jumped to the top of the table with a seventh-place finish in the Maiden City Stages Rally last Saturday in Derry. After being slowed by brake problems early in the event, Kilrea’s Desi Henry in a Fiesta Rally2 outpaced Citroen driver Cathan McCourt on the final stage to overcome a 1.9 second deficit and win by 2.3 seconds. McCourt finished second, with a back in form Gary Jennings also in a Fiesta finishing third. After a strong start to the event, Carryduff’s Jonny Greer surrendered his lead in the NI championship on the Altishane stage when he clipped a stone bridge putting him out of the event. Tyrone man Jason Mitchell and Donegal’s Donagh Kelly were another two big names who exited on the same stage. The championship continues with the Tyrone Stages Rally in two weeks’ time on the 4th of June.

In the British Touring Car Championship (BTCC) at the Brands Hatch’s Indy Circuit, Portadown’s Colin Turkington had a mixed weekend with fifth in the first race, tenth in race two and a great win in race three. Those results mean he remains 23 points behind championship leader Ingram who had a bitsy weekend with a 2nd, 5th and a 4th. Josh Cook was the pick of the field with two wins and an eighth, those great results moved Josh into second in the standings, now just eight points behind leader Ingram on 84 points. The action in the BTCC moves on to Thruxton next weekend with three more rounds.

In World Superbikes Larne rider Jonathan Rea struggled in race 1 finishing 4.7 seconds back in third behind championship rivals Alvaro Bautista and Toprak Razgatlioglu dropping him further behind in the standings. A superb win however in the Superpole race saw him claw back some of that lost ground. In race 2 Rea challenged championship leader Bautista in a daring pass on the last lap just holding on at the line to take a stunning win ahead of both his championship rivals with Razgatlioglu 4.1 seconds back in third. Rea closed slightly on leader Bautista to trail now by 17 points as the championship heads to Misano in Italy for round four of twelve on the 12th of June.

Kalle Rovanperä made it a hat-trick of wins as he claimed victory on Rally de Portugal on Sunday afternoon to follow his successes on Sweden’s snow and Croatia’s tarmac to open a 46-point lead at the top of the standings. Kalle had played second fiddle to long-time leader and Toyota GR Yaris team-mate Welshman Elfyn Evans for the first two days before moving to the top of the leader board on Saturday evening. He extended a slender advantage on the short final leg to win by 15.2sec. No one gave Rovanperä much of a chance as he started Friday’s opening leg first on the road, clearing the sand and stones from the stages for the other competitors. But Kalle, in still only in his early twenties kept himself out of trouble over the rock-strewn roads. To add to his joy, he took the extra points for winning the Wolf Power Stage over the legendary Fafe speed test.

This second-place finish for Elfyn Evans was his best result of the season so far. He will be happy to have taken six fastest times marking a return to form for the man who has finished world championship runner-up for the last two seasons.