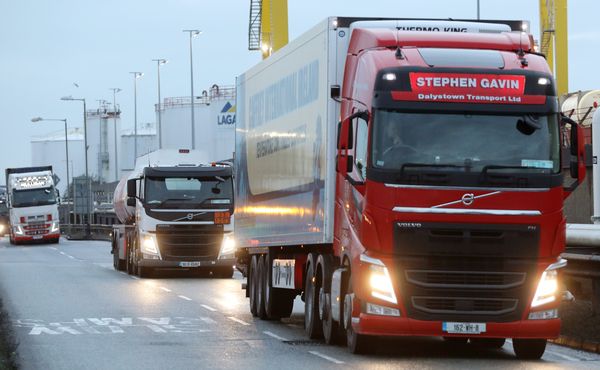 Even the most obsessive of local political observers must be reaching their limits. Can the navel-gazing over unionist party leadership changes and their consequences go on for much longer? Will the Obsessive Compulsive Disorder that has developed over one funeral and its policing ever be cured?

Going round in ever decreasing circles on the protocol is both destructive and self-destructive, and no escape lies in tragically pointing out that “sometimes violence is the only tool you have left”. Meanwhile, there’s a world out there in serious need of attention.

Lost in the noise was An Taoiseach’s latest announcement from the Shared Island Unit. It hardly needs pointing out that this is a very different animal from Downing Street’s Union Unit, now headed by Sue Gray who was the civil servant running Finance Minister Conor Murphy’s department at Stormont until recently.

After the Scottish elections, there is talk that Westminster will ‘love-bomb’ Scotland with centrally-directed money to hold the line against another independence referendum. Will Ms Gray come up with other more radical ideas? A change to the Barnett Formula? More devolution of tax powers? New fronts in the culture wars? From her experience of the North, she will certainly know plenty about the chronic problems we face in financing adequate public services after ten years of retrenchment. She will also know plenty about divided politics, though the schisms in Johnson’s government are not quite at the level of ‘empire versus republic’.

What is the Taoiseach’s Office up to?  A series of ‘scoping papers’ have been published on the “economic and social opportunities from increased cooperation on the shared island”. These papers, produced by researchers at the Economic and Social Research Institute in Dublin, describe research on four themes that will be carried out this year.

New research being undertaken by @ESRIDublin and the #SharedIsland Unit is comparing primary healthcare systems, north and south on the island, and drawing out implications for policy.

The research on primary health care (GP and other first port of call services) will look at comparisons in health status North and South (such as life expectancy) and look at the differences in access to services. Both the Sláintecare and Bengoa Reports stand on the evidence that better and more accessible primary care services (with no money barriers), improve health outcomes, lower the pressures on hospitals and reduce health inequalities. This does not come cheaply but strong primary care reduces the overall rate of growth in health care spending.

At present, access to primary health care services North and South is relatively poor say the researchers. Having to pay is the obvious barrier in the South while queuing for an appointment is the problem in the North.

Another problem is the lack of any mention of the climate emergency. While the Shared Island Unit has supported ‘climate dialogues’, it is not as yet supporting research on de-carbonising the economies. Instead we have the entirely orthodox framing of economic objectives in terms of ‘growth’.

Another research theme is education and training. The systems are very different North and South and “it is remarkable that there has been so little research” comparing the two. The North is still wedded to academic selection and a two-tiered grammar/secondary school system. In the South there is no academic selection as such but a fair amount of social selection goes on, including by gender (single-sex schools).  The research will “examine the consequences of these segregation processes for educational outcomes” and is to focus on the mismatch between qualifications and skills.

At primary level, reading skills are similar North and South but in mathematics, the North is better. Students stay on longer at school in the South and end up with more qualifications. At higher level, the pool of graduates is influenced by the numbers from the North who go to universities in Scotland, Wales and England, and who never return.

The South is more oriented to external trade than the North. It exports 62 per cent of services output, which accounts for a half of all exports. The North sells just over a quarter of its services output externally – at least, this was the position prior to Brexit. Post-Brexit it is predicted that some areas, among them accountancy, legal and courier services, are “most exposed to changes in market access regulations”. The research is primarily a benchmarking exercise.

The second area of research on the economy is on foreign direct investment (FDI). The central question being asked here is what makes Ireland attractive for high-value FDI? Between 2003 and 2015, the South attracted 5.5 per cent of all new greenfield FDI projects going to the EU. The figure for the North was a 0.3 per cent share. The South was more attractive to non-EU investors compared to the North, acting as a gateway to the European single market. The South’s disproportionate success was due to a range of factors – labour costs, workforce skills, research and innovation capacity – and was not simply due to low corporate taxes and other preferential tax arrangements.

There are North/South differences in the types of companies that are attracted. The North has attracted high-value FDI in software development, aerospace and telecommunications, while the South has been successful in attracting financial services, pharmaceuticals and biotechnology.  The idea of the research is to identify the policy levers that increase FDI, including workforce skills, economic infrastructure, business regulations, public investment in R&D, as well as corporate taxation.

It is a pity that the planned research papers on the economy do not tackle the impact of Brexit on trade flows and supply chains. Admittedly the trade-flow data for the North is not good as it’s produced only once a year and then with a big time lag. So we do not know how the protocol is shaping East/West trade, instead just a few anecdotes from the ‘smash-the-protocol’ lobby. But the Central Statistics Office produces monthly figures which show some dramatic changes.

Since the first quarter in 2019 (pre-pandemic), for example, the North’s sales to the South of meat, dairy and vegetables have gone up from €141 to €191 million, an increase of more than a third and there has been a ten per cent increase in the other direction. In contrast, trade in road vehicles has slumped in both directions. Year on year for the first quarter of 2021, the South’s exports to Britain are down a little (by 3 per cent). Trade from Britain to the Republic, however, is down by 48 per cent. But there are signs that this may be slowly recovering. On the other hand there are also signs that former imports from Britain are being substituted by imports from Europe and elsewhere. The value of trade from the North going South is up 44 per cent year on year. In the other direction trade was up 22 per cent. These are seismic shifts.

Another problem is the lack of any mention of the climate emergency. While the Shared Island Unit has supported ‘climate dialogues’, it is not as yet supporting research on de-carbonising the economies. Instead we have the entirely orthodox framing of economic objectives in terms of ‘growth’. At least try ‘sustainability’.

This is all very interesting, but the Shared Island research agenda is not necessarily relevant to the preparation of a prospectus on unity that is needed to inform a border poll when it comes. Clearly there is much ground-clearing work to be done so that all of us have a better understanding of economic and social life either side of the border.

It is also vital to deepen the understanding of similarities and differences in economic and social policies. The general availability of comparative data is an issue in itself for North/South research. Comparative research can educate and illuminate. But it involves different questions than those posed by bringing people, services and economic activity together for the greater good.