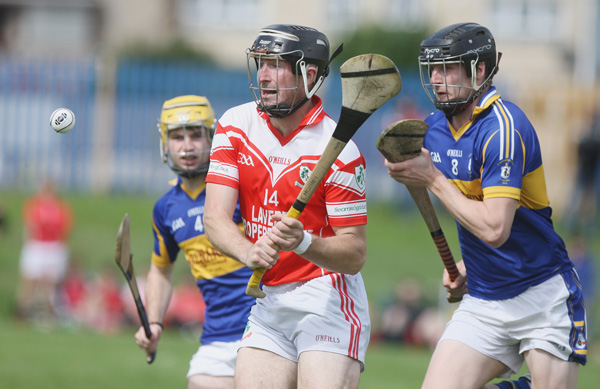 THE Antrim GAA Club Championships clicked into gear at the weekend with a mixed bag of results for city teams.
In the Bathshack Antrim Senior Hurling Championship, St John’s booked their place in Group Two alongside Rossa and Loughgiel as they defeated Ballycastle 2-21 to 2-13at Corrigan Park in their second leg tie to win 59-37 on aggregate.
The Johnnies wasted no time in adding to their 14-point pre-game lead when Michael Bradley cracked home an early goal and while Kevin Barry McShane responded in kind for The Town, a Conor Johnston goal from a penalty gave the Whiterock side a 2-11 to 1-10 half-time lead.
It was plain sailing for the hosts in the second period with Johnston and Mícéal Dudley clipping over the scores and while Dermott McShane goaled for Ballycastle, this tie has long been settled.
St John’s will enter Group Two where the first game took place on Saturday lunchtime with Loughgiel romping to a 6-22 to 0-7 win over a badley depleted Rossa.
Shamrocks had this game decided by the break with Tiernan Coyle scrambling home their first goal on 13 minutes, while team captain, Shay Casey bagged two more before the interval to establish a 3-12 to 0-3 lead – Rossa’s scores coming from Stephen Beatty and Tiernan Murphy (two).
There was no let-up from Loughgiel in the second half as they emptied their bench.
Sian McGrath lobbed Danny Murray for goal number four on 51 minutes, while Dan McCloskey found the net twice more in the closing stages to complete the rout.
In Group One on Saturday evening, defending champions, Dunloy travelled to Cushendall and edged home by a point, 0-18 to 0-17.

Intermediate Hurling Championship
In the Intermediate Hurling Championship, St Gall’s withstood three red cards to overcome Gort na Móna 4-10 to 2-11 on Sunday afternoon.
Mark Napier and Tomás O Cíarán hit first-half goals for St Gall’s before Conor Burke saw red, while Dessie McClean kept the Gorts in touch with a goal from a free to leave it 2-7 to 1-4 at the half.
CJ McGourty and Jackson McGreevy plundered a further two St Gall’s goals early in the second half, but McGreevy and then Napier were both send off to leave them with a major disadvantage,
However, Gort na Móna couldn’t take advantage with Darren Boyd’s goal with 10 to play ultimately proving mere consolation.
Earlier in the day at Creggan, a badly depleted Lámh Dhearg were on the receiving end of a 3-21 o 0-1 defeat to Glenariffe.
John Boyd hit the Red Hands’ only point of the game in the first half, but Glenariffe registered 2-11 in the opening period – Alex O’Boyle with their two goals.
There was no let-up from Oisin’s after the break as they piled on the scores and O’Boyle completed his hat-trick of goals to run out convincing winners.

Junior Football Championship
In the Junior Football Championship on Friday, last year’s beaten finalists, St Patrick’s, Lisbirn eased to a 3-13 to 0-3 over Éire Óg at the Cricky.
The Lisburn men were well on top and were 0-9 to 0-1 ahead at the break with Eoin Fay, Shane McEvoy and Josh McMullan catching the eye.
McMullan fisted home a goal early in the second period with Denver Taggart adding a second, while Cathal McMeel stroked home a penalty as Éire Óg crashed out.
At Woodlands, Pearse’s overcame newcomers, Laochra Loch Lao 3-18 to 1-3.
The North Belfast men asserted themselves from the start with goals from Conaill Campbell and Daniel Magee and while Feargal Mac Ionnrachtaigh netter just before the break, Pearse’s still held a healthy 2-9 to 1-2 lead.
The New Lodge men kept driving forward in the second half and a third goal arrived from Liam Deegan from the penalty spot to wrap up their victory and place in the last eight.