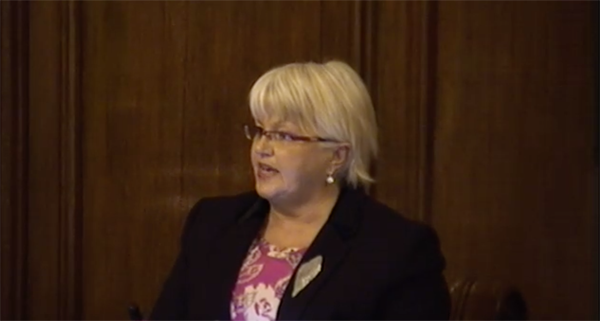 BELFAST City Council has always been known for providing more heat than light during its debates so it was apt that the representatives on the lowest rung of the political ladder would want their say on the Renewable Heat Incentive scandal at January’s monthly meeting on Tuesday.

Councillors in the Dome discuss Stormont issues a lot. Perhaps it’s because the chamber serves as a political first division feeder club where the best and brightest cut their teeth before elevation to the premier league at Stormont. It couldn’t be because they overestimate their importance, could it?

Cllr Ruth Patterson hasn’t been a regular attendee at the council meetings since she split with the DUP last year but Ruth has been biding her time and RHI provided the opportunity for her to explode back on the political scene.

Weeks before Tuesday’s meeting loyalist blogger Jamie Bryson had made public the draft of a motion that Ruth was going to put forward, calling for the British Secretary of State to use his powers to call for a public inquiry into RHI.

Putting forward her motion Cllr Patterson said she had listened in “utter bewilderment” at different calls for different inquiries and aimed barbs at Sinn Féin who she said were propping up the DUP by refusing to officially call for a public inquiry, even though individual party members had been in favour of the move.

She said she wanted to see a full public inquiry under the inquiries act and in a glorious mixing of metaphors said the DUP wanted to sweep the RHI scandal “under the carpet and might I remind you that that carpet is already bulging with the skeletons of Red Sky, SIF, NAMA, £5 land deals and numerous property scandals.”

First up in response was Cllr Jim McVeigh from Sinn Féin who said he wanted to amend the motion to call on first minister to stand aside to facilitate an “independent, time-framed, robust, and transparent investigation”.

This would be chaired by independent judicial figures from outside jurisdiction appointed by the Attorney General with similar staffing.

It would have the power to subpoena documents, compel witnesses and take on any other powers deemed necessary by the appointed panel.

In other words everything except a public inquiry, which Jim said would take “far too long”.

Billy Hutchinson said he was backing the original motion and the inquiry should take its course. TUV councillor Jolene Bunting said she was sure Arlene Foster was to blame and would back the motion. The SDLP were happy with Ruth’s original motion also.

The UUP’s Jeff Dudgeon also put forward an amendment calling on the First Minister to resign.

Cllr Michael Long from Alliance said people wanted the truth and secretary of state should call a public inquiry.

Cllr Matt Collins wanted a third amendment added – that a full election be called immediately. He was told that he couldn’t enter the motion but he could read it out.