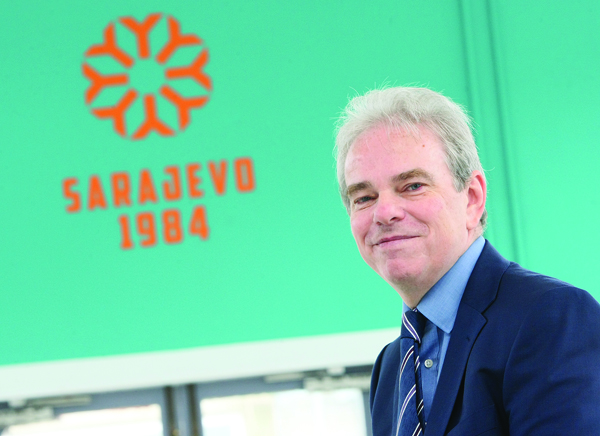 THE corridors and classrooms of St Mary’s Christian Brothers’ Grammar School have been transformed from present day to recapture the excitement and adrenalin of 1984 Sarajevo during the winter Olympics for an upcoming Torvill and Dean movie.
The film will chart the early years of the British figure skating duo Jayne Torvill and Christopher Dean and their journey to achieving Winter Olympic gold with their iconic Bolero.
The film, commissioned by ITV and supported by NI Screen has been filming in the Glen Road school while students were off on summer holidays as well as using the Shankill Leisure Centre as the filming schedule continues.
School Principal John Martin said he was very impressed with the attention to detail the film crew put in to recreating the particular period of history.
“The crew work so quickly to recreate the time and place,” he said. “We have had some of the corridors repainted, signage put up and some of our music rooms have been transformed to look like the Olympic Village were the skaters stayed – complete with itineraries on the walls and training timetables.
“We are delighted that St Mary’s was chosen for the film project and look forward to seeing the school on the big screen.”
Filming is continuing on the film with a release date expected in the autumn.