Mum’s thanks after funds raised for son 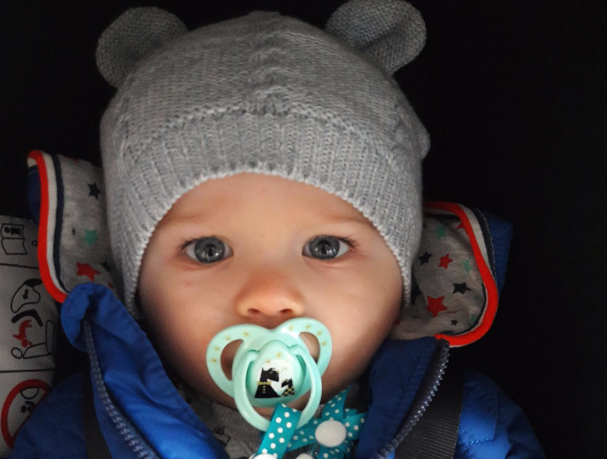 A POLEGLASS mum has thanked the community for their generosity in her fundraising efforts towards the treatment for her seven-month-old baby son.
Young Caoimhín Murray was diagnosed with severe Brachycephaly and mild Plagiocephaly. Brachycephaly is when the skull grows disproportionately wide compared to its depth. Plagiocephaly is a flattening to one side of the head.
Kelly Murray and her family have been driving a fundraising page in an effort to help raise money to fund Caoimhín’s cranial helmet for Headstart4Babies as there is no funding from the NHS.
Kelly explained: “Not long after Caoimhín was born it was noticed that he had a flattening to one side of his head. He also had great difficulty turning his head to the right side. My health visitor advised to reposition him and he was sent for treatment to physiotherapy for his neck. While his neck has improved and can now turn his head both ways his head has got a lot worse.
“His forehead is also now bulging at one side and because Caoimhín has a severe case it will not correct itself without helmet therapy.”
Caoimhín’s treatment costs £2,025 and money raised will go directly to Headstart4Babies, and in turn they will pay it directly for Caoimhín’s treatment.
Headstart4Babies is a small charity raising awareness of Plagiocephaly and Brachycephaly, and also provides help and advice to families faced with the condition and raises money to assist families to proceed with treatment.
“I want to thank everyone so much for all of your donations, this means the world to us and you have all been so generous,” said Kelly. “Your kind words have also helped make me feel positive about it all. I want to also thank MTK Global foundation for their very kind donation that has now got us to our target
“Not everyone is aware of this condition. And it does affect babies all different. For Caoimhín his health does play a big part in it. He has reflux so cannot enjoy prolonged periods on his belly as he gets very sick.
“His deformity also is affecting his development. He gets stuck at the side that is flat and it becomes very distressing for him to try and roll on that side. Therefore he is not building as much back strength as he should be. His health is my number one priority and that is why I have chose to do this. It was a very hard decision to make.
“Caoimhín will go and have a scan and cast done of his head this Friday to make his helmet,” she added. “He will then have it fitted two weeks later. He also goes for more physiotherapy next week so hopefully that will help with his back strength etc.”
Kelly also thanked Cllr Stephen Magennis for his help.
Cllr Magennis praised the community for their support and generosity.
“It’s great – everyone came together to help the campaign reach its target.
“I knew when we put it out there that the community would come out in support and a number of people did contact the family to help.
“I want to thank everyone who donated. This is something that this child desperately needed and now he can start his treatment.