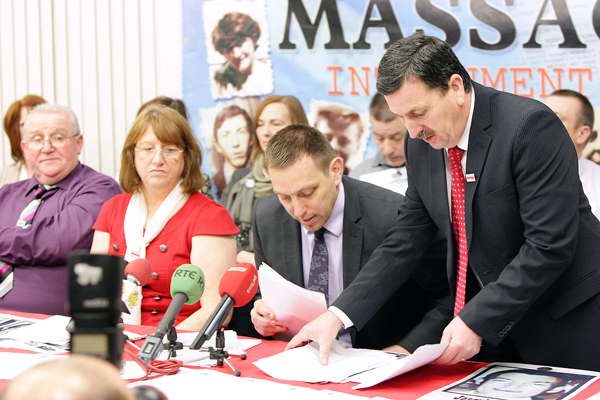 WORRIES: John Teggart, right, says the campaign will battle any plan for a state forces amnesty

THE Ballymurphy Massacre families have hit out at the DUP-Tory ‘coalition of chaos’ and expressed their concern at the possibility of any new deal allowing special treatment for British soldiers or policement charged with historic crimes.

Calls have been made for legislation to be put in place that would protect state forces from prosecution in legacy cases.

Speaking to the Andersonstown News, families spokesperson John Teggart said: “It looks very likely that the DUP will join the British Tory party to form a government and with that there is a real worry that the sectarian politics which the DUP are well known for in the north will be strengthened by the need for them to make up the numbers for a government.

“The Ballymurphy families know only too well the sectarian nature of the power of the DUP who have voted down motions put forward in support of Ballymurphy families in 2015 and again last year when they came out in strength to deny a motion supporting Lord Chief Justice Declan Morgan's proposal to clear all legacy inquests within five years.

“Indeed, Arlene Foster alone refused to sign off on that proposal as First Minister which would for us correct history rather than, as they put it, ‘rewrite history’.”

John continued: “Any plans for an amnesty or statute of limitations will affect both communities and we totally oppose any form of an amnesty. We will watch very closely as any dirty deals forming come to light and oppose them in any way we can, this Tory/DUP coalition will only increase division and sectarianism.”

In September of last year the Ballymurphy Massacre families walked out of a meeting with Secretary of State James Brokenshire, describing it as “terrible”.

“The Stormont talks also highlight the need for independent brokers to chair the talks. Brokenshire should stay away.

“One thing that has come out of this coalition is that it has highlighted what the DUP stands for. The British media spotlight is on them and not in a favourable way, as we are seeing locally on social media the antics of many DUP members over the years.

“Somehow I don't think the DUP will give victims a second thought when they are lining their comrades’ pockets and denying truth and justice. Any deal should be for all sections of the community in the north.”