Murphy hoping minors can build on U17 glory 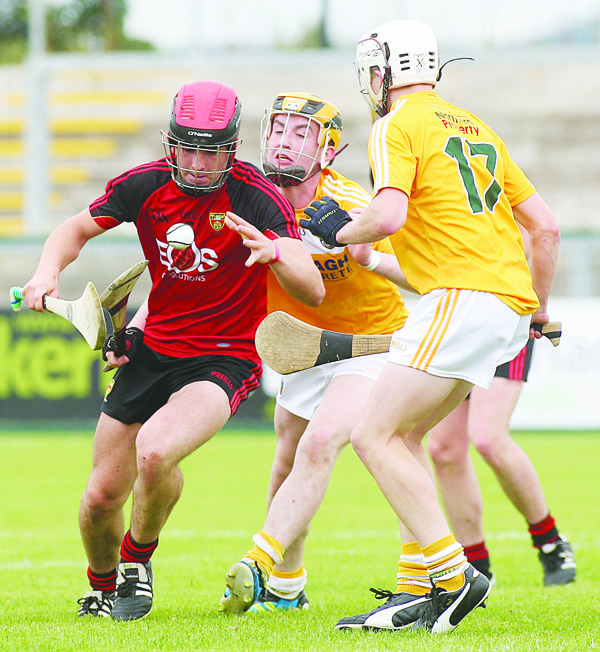 Antrim's Conor Boyd and Ed McQuillan challenge Down's Ruairi McCrickard during last year’s Ulster MHC final in Owenbeg. The Antrim duo are expected to feature for Collie Murphy’s side at Corrigan Park on Sunday when they host the Ardsmen

ANTRIM minor hurling manager Collie Murphy is hoping last week’s U17 All-Ireland success will inspire his side as they begin the defence of their Ulster title against Down on Sunday.

The Saffrons claimed victory over North Cork in the Celtic Challenge final in Carlow last Saturday. With a large overlap of players, the competition served as a perfect stepping stone to the minor Championship and Murphy was understandably delighted with Antrim’s performance.

“I was delighted with them. It gives the whole squad a great lift,” said Murphy. “It was great for the younger players, one or two of them would have made the minor squad if it wasn’t for the new rule.

“It was important for them and we really embraced the Celtic Challenge. “We set it as a goal for the year – that we could give the competition a real good lash in preparation for the Ulster Minor Championship.”

A scintillating performance from Seaan Elliott helped Antrim claim a 2-17 to 1-12 win over North Cork. The young Dunloy ace hit 1-11, 1-5 from play, and led the Rebel defence a merry dance over the hour in what was a simply breath-taking display of skill at Netwatch Cullen Park.

Yet, the entire Antrim team and the substitutes contributed to a famous victory. Antrim used the elements to their advantage in the first half and withstood everything the North Cork men could throw at them in the second half.

Captain Ryan McGarry and full-back Conal Bohill were magnificent while facing the elements in that second half as Cork tried to force their way back into the final. The foundation for the win was laid in the opening 30 minutes and the Ulster side hit their first goal after six minutes. Elliott provided the finish after Conor McBride did brilliantly to find him in space.

McBride’s movement and pace caused North Cork problems and he linked up well with Eoin McMenamin in the early stage. North Cork hit back and scores their goal three minutes later when midfielder Cian Crowley cut in from the left and riffled the sliotar beyond Declan McCloskey to the Antrim bet Towards the end of the first half, Antrim really hit their stride and opened up a substantial lead.

They outscored their opponents 1-7 to 0-2 with midfielder Oisin McAuley hitting a stunning goal. As the half-time whistle blew, Antrim led 2-13 to 1-6, but the lead didn’t seem like a massive one given the strength of the wind.

McAuley’s goal seemed to rattle North Cork and they were caught out by Elliott on the restart when he took his tally to 1-8 with another fine point. A trio of points from the dangerous Tómas Howard, Cian Twomey and Jake Madigan kept their challenge alive, but the Antrim defence held firm with Eoin McMenamin and Anton McGrath dropping into deeper positions to help starve the North Cork forwards of any time and space.

Despite playing with the wind, the Rebels seemed reluctant to take any shots from distance and with McGarry and Bohill on top of their game at the heart of the Antrim defence. North Cork were reduced to 14 men with 10 minutes remaining with Adam Barrett picking up a second yellow card. In the end, eight points separated the sides and it was the least Antrim deserved and credit must go to U17 boss Sean McManus and his management team.

The onus is now on the county minors to build on last weekend’s win and Murphy is hopeful the Celtic Challenge success will act as a springboard for his U18 side. “We are hoping the Celtic Challenge will give us that boost to know that we are able to compete at a higher level,” said Murphy.

“However, we realise that Down will run us very close and the won’t be much in it on Sunday. Hopefully, we’ll come out on the right side of the result. “Antrim pulled away from Down in the second half last year, but Down were leading at half-time in the Ulster final.

“At the minute, everything is just focused on Down.”

In the aforementioned Ulster final, Antrim ran out 10-point winners in Owenbeg with Donal McKernan and Conal Cunning impressing. This is a much-changed Antrim side, however, and last year’s result will count for little. Down’s U17 were also successful in their Celtic Challenge final last weekend, winning the Division Three crown with a 3-11 to 2-11 victory over Dublin Plunkett.

When the U17 sides met in the early stages of the competition, Antrim claimed two wins over Down. However, the margin of victory was four and one-point wins so Antrim can take nothing for granted.

The Saffrons will have home advantage for Sunday’s Championship opener with Corrigan Park hosting the game. The winners will be strongly fancied to account for either Derry or Donegal in the provincial final a week later so there is plenty at stake. Down were the last team to defeat Antrim in the provincial series – winning the 2012 minor crown.

Antrim have a handful of last year’s minor back for 2017 with Liam Gillan, Ed McQuillan (both Cushendall), Conor Boyd (Ballycastle) and Shane Magill (Glenarm) also expected to start. Yet, it is the presence of sharpshooter Elliott in the Saffron ranks that could swing Sunday’s provincial semi-final in the home’s side favour.