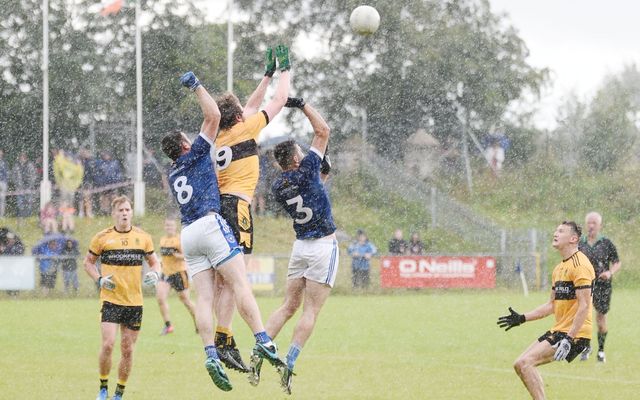 The rain sheets down at De La Salle Park on Sunday

NAOMH Éanna manager Frank Fitzsimons expressed his pride at seeing his side claim the notable scalp of St Gall’s at Milltown Row on Sunday afternoon - especially the manner of their victory.
Trailing by six points midway through the second half, the Glengormley side looked to be chasing shadows as the home side played keep ball during a heavy downpour of rain.
The second half water break came at the perfect time for the 2018 Intermediate champions and their pace was telling in the closing stages of the game.
James McAuley, Odhran Eastwood, Peter and Kristian Healy fought for every break in the final quarter while Ruairi Scott’s stunning effort off the outside of the boot was good enough to win any game.
This felt like a coming of age win for Naomh Éanna. For all the talk of St Gall’s being in transition, they are still laced with quality players who have multiple county titles to their credit.
“It was a great boost to beat St Gall’s and they showed great character.
“We capitalised when they went down to 14 men, but I always felt we’d plenty to give in the last 15 minutes. Our lads are very pacey and they’ve matured a lot. If you can’t get up to play St Gall’s, you may forget about it.
“To be fair, St Gall’s always go out to play football against you so it was a good challenge for our boys.
“When they (St Gall’s) get out in front, that’s when they show their class – they are so hard to peg back.
“If they had have tagged on one or two more scores, it would have been that. St Gall’s will always try and score goals so, when you keep them to one goal, you’ve always a chance.
“We’ve played them in league over the last few years and when they score a few goals against you, the heads go down - they are capable of putting up a massive score against you.”
He added: “When you’ve players like James McAuley, Peter Healy, Kristian Healy, Eoin Nagle, (Odhran) Eastwood and boys like that, they’ve been playing together a long time.
“Hopefully the run in the Intermediate will have helped them and we’ve a full panel to pick from at the minute.
“I’ve been telling them over the last few years, they are fit to live with any team in Antrim - it is the consistency we need now."

The sides were level at 0-5 at the break following a keenly-contested first 30 minutes.
Odhran Eastwood and McGourty shared the first four scores between them from free kicks before Kevin Nibock’s mark nudged the hosts ahead.
Yet, another free from Eastwood and a well-struck 45 from Ruairi Scott had Naomh Éanna 0-4 to 0-3 in front at the first water break.
Stephen O’Connor bagged his side’s first from play to put the North Belfast side two ahead, but St Gall’s finished the half with points from McGourty from a 45 and captain Eoghan McCabe to level proceedings at 0-5 each.
St Gall’s boss Paddy Murray introduced seasoned campaigners Terry O’Neill and Aodhan Gallagher at the break and the hosts took control of the game in the early stages of the second half.
O’Neill and McCabe combined to put Conor Stinton through on goal four minutes into the half and the half-forward calmly played the ball across to Niall Burns at the back post to palm into the net.
A hat-trick of points from McGourty, two from frees, had his side six points up and Naomh Éanna were struggling to gain any meaningful possession as the heavens opened above De La Salle Park.
Their momentum was then halted first by a second yellow card issued to centre half-back Jackson McGreevy then by the second water break, which came at the worst possible time for the home side.
It provided Naomh Éanna with an opportunity to regroup and they emerged with a renewed sense of urgency.
They threw caution to the wind and posted Eoin Nagle, who had been operating as a sweeper, further up the field.
The introduction of Ethan Gibson also gave the St Gall’s a fresh puzzle to solve and, after Eastwood and landed another point, he scored a carbon copy of the St Gall’s goal from the first half.
This time is was Kristian Healy who put in the hard yards before delivering a perfect pass to Gibson who palmed into the net.
The goal turned the game on its head and the Glengormley side smelt blood. They tackled and harassed St Gall’s like their lives depended on it with captain James McAuley throwing himself into several challenges.
Their tackles weren’t always legal, however, but St Gall’s couldn’t add to their tally.
Instead, it was Eastwood who hit two further frees to level the game up before Scott’s stunning effort from 40 yards out put Naomh Éanna into the lead for the first time since the early stages of the game.
Another turnover and a point from Kristian Healy late on sealed a famous win over Naomh Éanna who are now strongly fancied to progress to the quarter-finals from Group 4.
They’ll need a point from their final two games at Gort na Móna or at home to St Gall’s to guarantee a top two berth with the winners and runners-up in Group Four playing the runners-up and winners in Group One respectively. Creggan top Group One as things stand with Ahoghill in second while Portglenone have lost both their games so far.
“The next game is a massive one for us,” stated Fitzsimons.
“Gort na Móna are very hard to beat. Albeit, St Gall’s made short work of them last week, but when St Gall’s play like that, they are hard to stop.
“As long as we are in the hat for the quarter-final draw in the few weeks time, we don’t care how we get there.
“It will still be tough to get out of the group, we still need one more result against Gort na Móna or St Gall’s.
“We have to keep our feet on the ground as nothing is guaranteed, but we are in a better position now than we were on Sunday morning.”