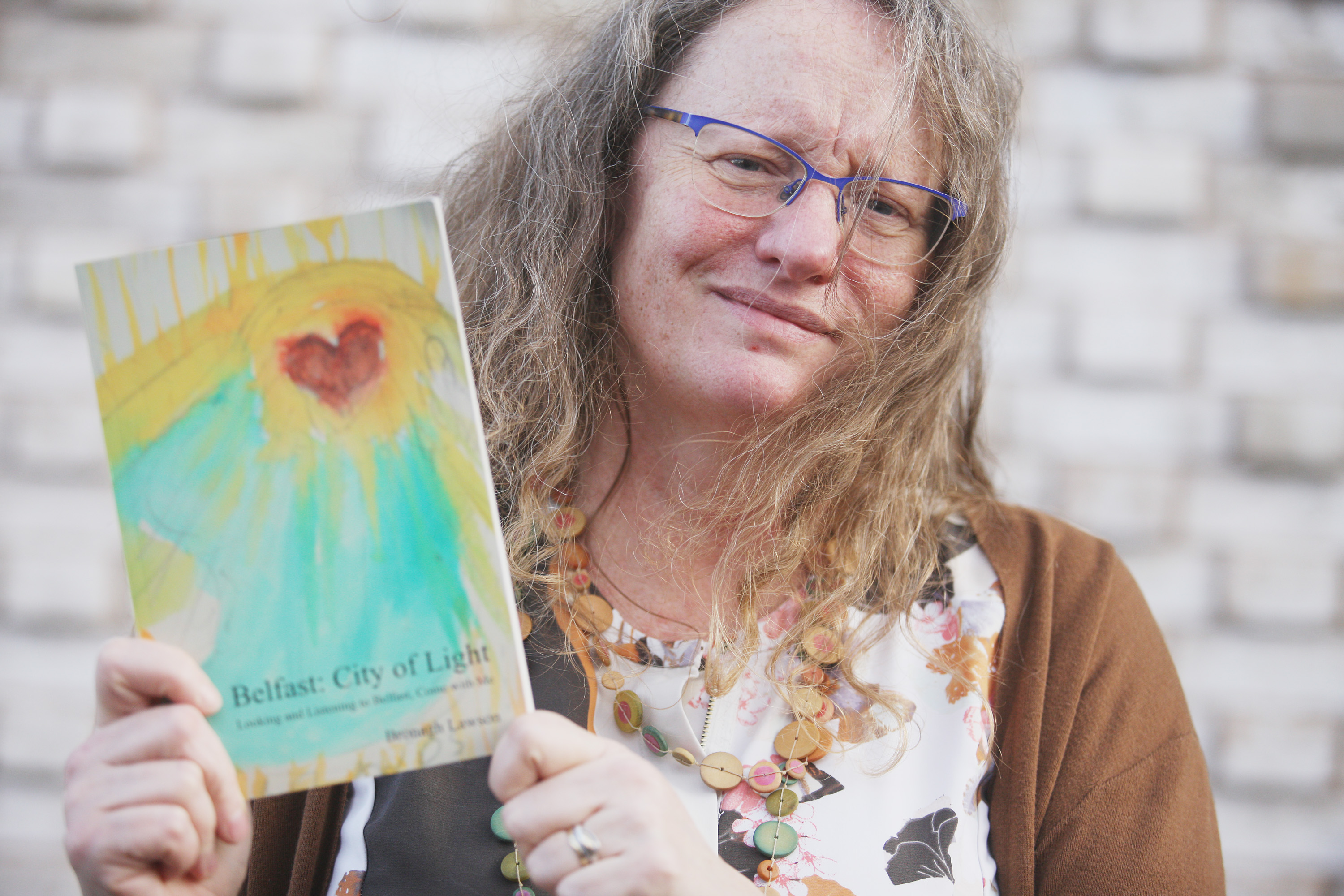 ENDEAVOUR: Artist Bronagh Lawson with her book on Belfast churches

WHAT if, in the city of Belfast, that is conflicted both emotionally and physically, a non-churchgoer artist decides to visit every church for a service, simply looking and listening to what is going on. Well, Bronagh Lawson decided to do just that and has written about her experiences in her new book, Belfast: City of Light.

Born in Newtownards but growing up in Strangford and Portaferry, Bronagh’s career as a visual artist began after attending art college in Bristol before gaining a first class degree in textiles fashion at Winchester School of Art. She then won a Fulbright scholarship and attended Parsons School of Design in New York.

Bronagh returned to her native North pre-ceasefire and for 13 years she set up and ran cross-border, cross-community development programmes mostly within the enterprise sector in interface areas of Belfast.

Bronagh’s journey to her new publication started with an idea to do something different rather than listen to the same old rhetoric that exists in the North.

Asked what made her write the book, Bronagh joked, “Insanity!”

“I was a non-Church-goer. I grew up during the Troubles and I just had enough of the whole mess,” she said.
“I have never written a book before. I am a visual artist and very much a visual person so that is how I normally do things. It is very time specific.

“The idea of doing a book was to condense something down that was a bit more portable. A book can go wherever it wants instead of visual art which requires people coming during a set period of time.

“At the beginning, I didn’t tell anybody what I was doing. I then started talking about it a bit and people asked me questions.

“When in the churches, people would remark to me that I got to write a book.

“The journey became so compelling and extraordinary that I felt destined to write it down.”

Bronagh started her journey in 2008 and amazingly has still not visited every church in the city. She explained that she wanted to ask, what is going on in churches in contemporary Belfast and how might this open-minded curiosity inform the continuous shifting conversation about religion here.

“I visited hundreds of churches in Belfast. I started in 2008 and have still not completed all in the city. I am still finding new churches.

“I launched the book in Dublin last week and the reaction was phenomenal. The questions were really interesting and some people were shocked that I had actually done this.

“I won’t give away too much about what I discovered. You will have to read the book!

“One thing I would say is that this book challenges perceptions. There is a common perception that no young people go to church. I discovered churches full of young people.

“There are some churches with just grandparents and even some with no men in it.

“My assumption before I started was that nobody really goes to church anymore. The more I went to different place, I found out this was not the case in many places and maybe people don’t talk about it.

“There is so much baggage here that I think is the reason people don’t talk about it.

“On the other hand, you also have a lot of people who are more than passionate about their church and their beliefs.

“The thought of doing it was daunting. I wanted to try and find a list of churches in Belfast but actually one does not exist. There are just so many different factions.”

Bronagh is encouraging people to read the book and wants to encourage others to see an alternative view of the spiritual life of Belfast.

“I want people to approach the book with an open-mind and curiosity. I want more people to look and listen. There are too many people around who don’t listen to anybody. Looking and listening is a real skill.

“I have put something together that goes beyond the binary of things.

“I want to encourage people to get away from the whole Catholic or Protestant thing and approach life in a different way.”

As for writing any more books in the near future, Bronagh laughed, “I think I need to get over writing this one first!”

Belfast: City of Light by Bronagh Lawson is priced at £14.99 and is available online at www.lulu.com/shop