ELLY ODHIAMBO: Let's open up to our new citizens – it costs nothing 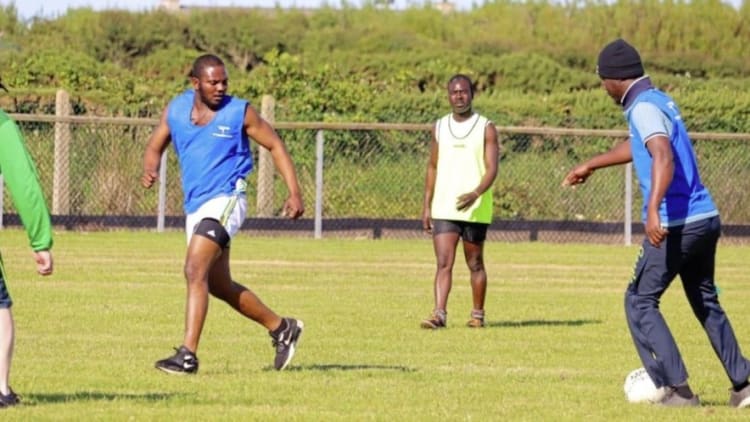 SHARING STORIES: Understanding other cultures is the way forward. Ghanian fishermen put through their paces at Ardglass GAC GAA

WHEN we think of diversity, we generally make sweeping statements about a population rich in cultures, races, beliefs and nationalities from Siberia to South Africa, the Americas to the far back of Australia.

We build a beautiful cosmopolitan picture made of diverse things; food, the arts, stories, religion and languages. Is this enough? It is ideal and generally most people would rather live in a diverse haven because a strictly homogeneous identity, that is one culture, will make a place boring to death.

Imagine Ireland without its sense of humour, Congo minus earthshaking music and dance, a non-athletic Kenya and the English whining that there is no tea to be served. The earth would be so dull.

This is why diversity is important. The community that is coming into a new place should open up to their hosts, it is common sense. To find a true sense of diversity a weak bond happens because there is no communication between and among groups. In France, diversity is reference to the colours in the population but not the sharing of platforms, power and public resources equally. The migrant population there have mostly copied and accepted the French way of life but the impact is not seen in participation in public offices and culture like in parts of Britain. General Charles de Gaulle, then President of France pondered in a 1962 speech how it was possible to govern a country that had 246 types of cheese.

Never. In today's context, de Gaulle is probably referring to how far new cultures if you like can go to establishing their presence, they must be ready to mix and stop being too careful. This is not about the French cuisine, the new citizens are effectively delaying diversity if they are not being a bit extroverted, loosen up, it costs nothing. It is easy to say this, some people prefer their private space, however there should be local bylaws that will ensure new voices integrate in more ways than the token visible calender of community events. It should be choice and there should be incentives to encourage this model.

Another good story of diversity is happening in the wee coastal towns and villages.

Northern Ireland receives tens of West African seafarers mainly from Ghana who are recruited by fishing companies in Ardglass, County Down. Over 30 of these mostly young fishermen recently joined a local Gaelic football club and they are enjoying every minute of it. Initially they found it strange using their hands to play football. Now, they think they are GAA pros, happy days!

The next thing you will hear them actually speaking touristic Irish, asking for the rare 6th century póitín drink, who knows. In 1999, I felt distinguished when a few fellow students in Derry asked me to sample the traditional Irish spirit, it was lethal. I remember the one, two, three shots and never again. Integration in the community takes different forms indeed.

Imagine all new migrants are told, you must learn the English language not in return of censorship of your own language, no, but learn it in order to add value to your everyday activities.

This step would minimise the need for translation services. Some of the customs we are used to in our mother nations are not found in Northern Ireland. We just have to accept, no point being too tight, it benefits you more than harms you actually, otherwise this place would not be our port of call. Fact.

So what happens then when the streets of Belfast, Derry/L'derry, Enniskillen, Omagh, Armagh, Bangor are well integrated using the model above of opening up, will life be much better for everyone? It is a continuous process full of hiccups, minor and major. Nothing happens successfully without well measured risks.

We, all communities in Northern Ireland should be open to opening up their cultural spaces more especially telling the stories of their heritages, good, the difficult and the hopeful.

When I sound repetitive about my departed ninety-four-year-old distant relative, Akuku Danger, the man who had 130 wives and over 250 children. He took the act of polygamy one step too many. This lightly divided the village and can you even imagine how many honeymoons and honeymoon periods he had in his life and what his wives endured in their marital standing? Imagine introducing yourself in a rural village ballroom as wife 111.

When we are able to share such stories of history, place and pseudo-cultures, the host community is able to understand why the past was they way it was and why some of these things will either continue or finally collapse. Such stories help all sides to understand human relationships without being culturally dismissive.