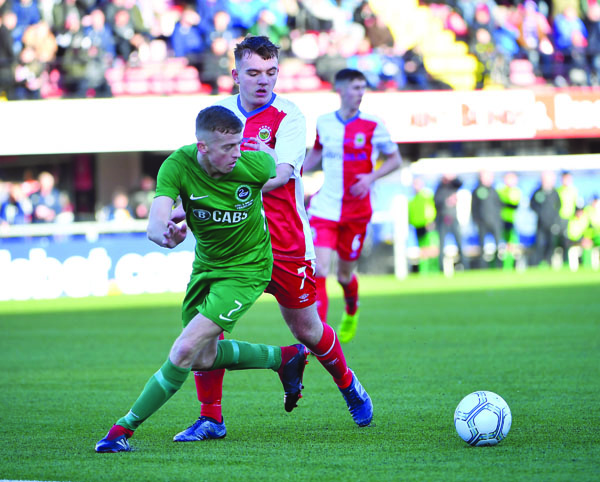 Newington’s Michael Gallagher pictured in action against Linfield Swifts in the Steel and Sons Cup final on Christmas Day.

SCORING five goals away from home would usually guarantee any visiting team all three points and Newington manager Conor Crossan says his side must tighten up their defence following last Saturday’s incredible 5-5 draw at Bangor.

This weekend, their attention switches to the Intermediate Cup and a last 16 clash with Mid-Ulster Intermediate ‘A’ League strugglers Fivemiletown United.

Newington will be fancied to make it through to the quarter-finals, but Crossan is seeking an immediate improvement after a Michael Halliday goal on 91 minutes denied them victory at Bangor.

“It was disappointing with Bangor scoring so late on. We went from one extreme to the next because the week before we were defensively sound against Portstewart,” said Crossan.

“On Saturday past, we were just a totally different team. We fell asleep. Their first goal was offside, but the other goals were just poor defending and a lack of concentration.

“When it went 5-4, we were just trying to hold on for the last few minutes and we were disappointed to concede in stoppage time.”

As is the case across the board, league football can take a back seat when teams go on an extended cup run.

However, the Newington boss feels continued progress in the Intermediate Cup can help their league prospects as well as soothing the hurt from their Steel and Sons Cup final defeat to Linfield Swifts on Christmas Day.

“I think it is definitely a help as we only play 20 league games,” said Crossan.

“Realistically, there are only two cup competitions IPL teams can win – the Steel and Sons Cup and the Intermediate Cup.

“We fell short in the Steel and Sons Cup final on Christmas Day so we are trying to get a bit of silverware with the Intermediate Cup.

“If you go out of those competitions early, you could have a week on and a week off and it is hard to build momentum.

“If we get a win on Saturday, we are only three wins away from Windsor Park. Hopefully, we can do enough on Saturday to get us into the next round.”

With Annagh and Bangor among the high-profile teams to have exited the Intermediate Cup in the third round, Newington now find themselves as one of the fancied sides left in the competition.

Crossan, however, has urged caution ahead of Saturday’s clash after losing out to Fivemiletown in a thrilling Irish Cup tie during the 2016-17 campaign.

“It was a great achievement for Crumlin Star winning the Intermediate Cup last year,” added the Newington boss.

“I know some big clubs went out in the last round, but there is still plenty of quality left in the competition – the likes of Belfast Celtic, St James’ Swifts and Lisburn Distillery.

“Saturday will be a tough game. We played down in Fivemiletown a few years ago – the pitch is a bit of a leveller. We were winning 4-2 with 10 minutes to go and ended up getting beat 5-4.

“I know they aren’t going too well in their league, but cup games are different and we’ll be expecting a difficult game.”