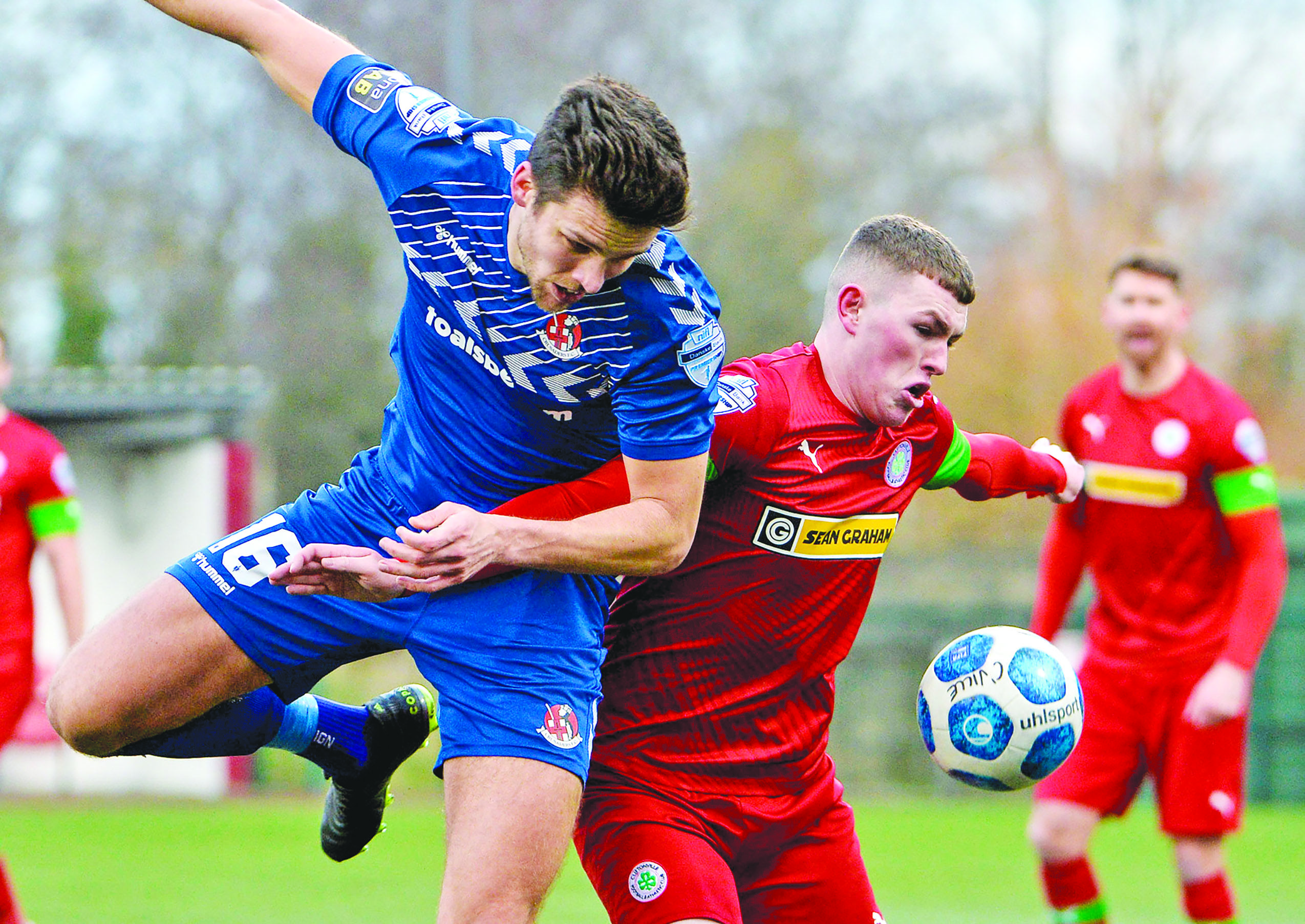 PADDY McLaughlin believes that his Cliftonville side are approaching Saturday’s North Belfast derby with Crusaders in a great shape.

The Reds make short trip to Seaview to take on local rivals Crusaders (3pm kick-off) looking to extend their winning run in the league and claim the derby spoils for the first time this season.

A Jordan Owens goal settled the corresponding fixture on the Shore Road in October and Cliftonville were primed for revenge in January until an injury-time equaliser from Ben Kennedy secured a point for Stephen Baxter’s side.

The Solitude men are on a run of three successive league victories and McLaughlin is happy with individual and team performances in recent weeks.

“It’s not just the results at the minute, it’s the form of players individually and the form of the team,” reflects McLaughlin.

“Some of the football they’re playing at the minute has been top drawer and going into the game when everybody is firing on all cylinders - the side’s getting good results and the team is performing really well – it’s probably a brilliant time to play anybody never mind Crusaders.

“We look forward to it. The confidence is high at the minute and the form of Michael McCrudden up top…

“He’s been disappointed not playing a lot, especially recently, but he’s got the nod over the last couple of games. He’s scored five goals in a week and that’s some return for any man who’s come into the team, never mind any striker who is playing regular football.

“What a bonus he is to us. If he can maintain that throughout the season, you never know where he could shoot us to.”

With fixtures still being played behind closed doors for the foreseeable future, McLaughlin is disappointed to be without a vocal backing going into the derby battle.

“It’s disappointing for the fans that they aren’t going to be there because they make the fixture,” he believes.

“You think back to the St Stephen’s Day fixture last year when we packed out the two sides of the stand and to go and get a result was a brilliant feeling. It’s a pity they aren’t going to be there again to hopefully cheer us on for the same result.

“It will be a tough game; all the North Belfast derbies always are no matter what is going on in the league for either side. They are always tough battles and it’s one we look forward to.
“We’re prepared for it and going in on good form, so we’re looking forward to it.”

McLaughlin was delighted to see Ryan O’Reilly on the scoresheet in Tuesday evening’s victory against Dungannon Swifts but feels all of his players are hitting top form and has called for it to continue between now and the end of the season.

“He was pushing for goal to be fair to him,” McLaughlin notes.

“He got a wee glimpse of it in the first-half and he pushed for it in the second-half and got on the end of a well-worked set-piece.

“It’s not just Ryan, it is the whole side as well. That’s a couple of games now that we’ve put a good run of form together. It’s a great time for all our players to be hitting top form.

“We’re coming close to the split and close to the run-in. If they can maintain that throughout the rest of the season then you never know where it can take us.”

Whilst acknowledging that their close competitors for a top-six finish dropping points is a bonus, McLaughlin insists that the focus is firmly on the team’s own results.

“Those results are all bonuses when you hear them coming in but we don’t really focus too much on them to be honest - we focus on ourselves” he insists.

“I think if we keep doing what we’re doing, keep our head down, keep playing the football that we’re playing and scoring the goals that we’re scoring then we don’t need to look outside of our own result.

“When you hear that when you come in, it is a bonus but it’s nothing we can really concentrate on – we concentrate on ourselves because we have another tough game on Saturday.”

McLaughlin will hope to have January signing Paul O’Neill available for Saturday’s clash, having rested the striker for the last two encounters owing to a knee complaint from a week of training with the NI U21 squad.

However, McLaughlin was pleased that Michael McCrudden filled the void left by O’Neill with five goals in the last two games and branded his fellow Derry native top quality.

💬 Paddy McLaughlin says the absence of Cliftonville supporters will be keenly felt when his players step out for a third consecutive North Belfast Derby without the Red Army in attendance.

“The opportunity came across when Paul was called up into the U21s” he revealed.

“They trained away for a week and double sessions for a week and we weren’t aware of that actually being the plan for them. We thought it was going to be a light enough week for them and he’s come back with a bit of a knee problem and it flared up after the Coleraine game.

“Long-term, we’ve got to protect Paul and all our players. It was only right that we took him out of the games because the intensity of Saturday-Tuesday (games) was going to be difficult for him and it would have made the injury a lot worse.

“We took a chance and sat him out but when you have players like Michael McCrudden to come in, then it is a great swap and change.

“He’s scored five goals in the two games he’s come in and the gamble has paid off for us.