Non-elite teams not expecting to return with competitions cancelled 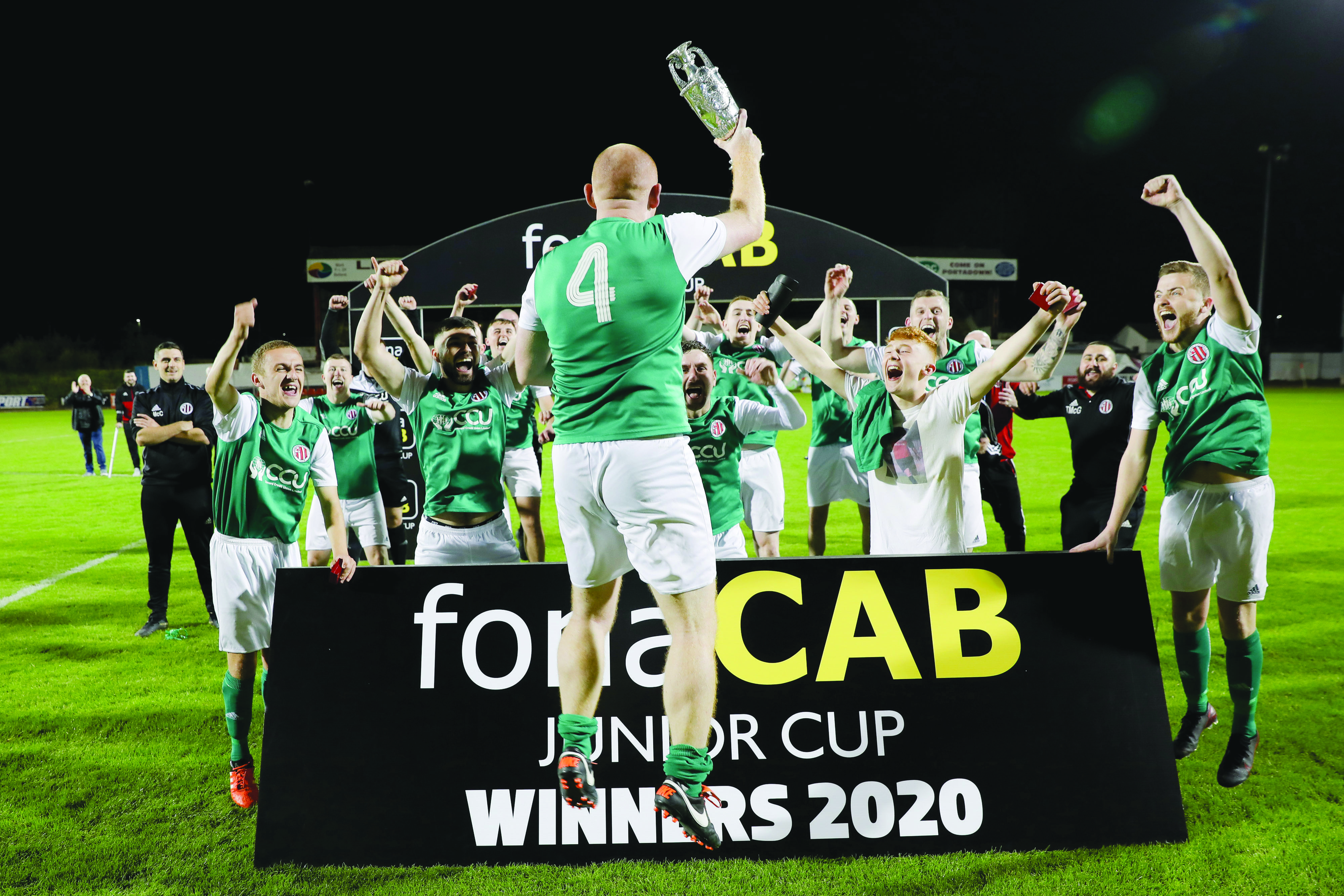 THE prospect of any junior or intermediate football returning this season appear remote with the cancellation of another batch of competitions.

With the Steel and Sons Cup already scrapped, the Irish FA last week confirmed that the Junior and Youth Cups were also cancelled.

The Northern Ireland Football League then confirmed the cancellation of the Championship and Premier Intermediate leagues having failed to get a single round of games played under the restrictions which ruled players outside of the Irish Premiership as ‘non-elite’.

On Monday night, the Ballymena and Provincial League followed suit and declared their league null and void with just two rounds of games completed.

While a number of local sides are entered in the Irish Cup, their participation remains in doubt and there is no further update on the future of this season’s Intermediate Cup.

Last season’s Intermediate Cup was completed in the summer while the final of the Junior Cup also took place at the end of July with West Belfast side Willowbank defeating Enniskillen Rangers on penalties at Shamrock Park.

Willowbank manager Declan McCrory works as a radiographer at Belfast’s Musgrave Hospital and said he told his players not to expect a return to action any time soon.
“It was inevitable and I’ve told the boys from the start to expect that decision,” stated McCrory.

“I work as a radiographer at Musgrave Hospital and I see first-hand the effect it is having on people. I’m am relaying that to our lads. It is a threat. They might not see it as a threat to them, but it is a threat to their parents, grandparents, aunts and uncles.

“I think they’ve got the point now and everyone realises the severity of the situation.

“I told the boys not to get their hopes up. In term of a return to football, it is the last thing that the government needs at the minute – a group of players travelling together from Belfast to Bangor or to Lisburn or wherever.

“It just puts too many people at risk and I didn’t have much hope for it being played.

“I’m still disappointed that it won’t be played. What we’ve tried to do is get the lads involved in other ways. We’ve been doing a lot of charity work with food banks in West and South Belfast and we’ve got the boys helping get food out to people who need it.

“I can’t see football returning until the majority of people are vaccinated.”

McCrory believes that a fresh start for the 2020-21 season would at least allow his players a proper pre-season.

In the meantime, his focus is on the wellbeing of his players in the coming weeks and months.

“Our boys would go back now if you let them,” added McCrory.

“But we were given a start date earlier in the season and we did a mini pre-season and then it was cancelled. The boys don’t want to go back and be disappointed again. It needs to be all-in or nothing at all.

“We also have to look after their mental health as well because they feel isolated. They are getting out for walks, but we, as a club, can’t organise anything for them.

“We done a wee quiz a while back and we are trying to keep them involved as much as we can.

“I’m lucky – my job is safe. Some of our players might not have steady employment. Football is their release at the weekend. You get to see your mates at training and you catch up on things. I think this lockdown is getting to people so we need to get everyone engaged as best we can.”

Clarification
Meanwhile, Newington boss Conor Crossan has called local football authorities to provide further clarification on the future of cup competitions with the Premier Intermediate League now cancelled along with the Championship.

The NIFL are looking into an alternative cup competition for Championship and Premier Intermediate teams, but the Newington manager feels the uncertainty of the Irish Cup and Intermediate Cups needs to addressed first.

“I had actually called for the leagues to be cancelled at the previous meeting, but the rest of the clubs weren’t exactly forthcoming on agreeing to it,” said Crossan.

“Even one month ago, I was fed up with the whole stop-start nature of it. I felt it was the best decision to let the players, management and committee focus on different things, family life and whatever.

“I just wanted a bit of certainty and clarity. Even now, we don’t have that as there is still talk of playing the Irish Cup and the Intermediate Cup hasn’t been agreed yet either.

“There is talk of a regional cup competition for the Championship and IPL teams with the Irish Cup being played after. I don’t know what the situation is with the Intermediate Cup – there seems to be a lot of uncertainty around it.”

Like McCrory, Crossan says the people hit hardest are the players, but Intermediate teams could still see some football before the end of the season.

Yet, Crossan feels it would be unfair to pitch Intermediate clubs into the Irish Cup for what would be their first competitive game of the season.

“It is very hard for the players to keep going when they have no end date in sight. Even when we were allowed to train, it is hard to get motivated when there is nothing happening on a Saturday,” added the Newington manager.

“I think the players would now like clarification on what is happening with the other competitions. The players are still in limbo. It would be very hard for teams in the Championship and Intermediate League to play our first competitive game of the season in the Irish Cup.

“It wouldn’t be fair. We were drawn away to Knockbreda and they would be in the same boat as ourselves, but the likes of Portstewart are away to Cliftonville.

“If that was their first game, it wouldn’t be fair on Portstewart and that’s something the IFA are going to have to look into. It isn’t anybody’s fault, we are all waiting on guidelines coming from the Executive, but it tough on the players involved.”