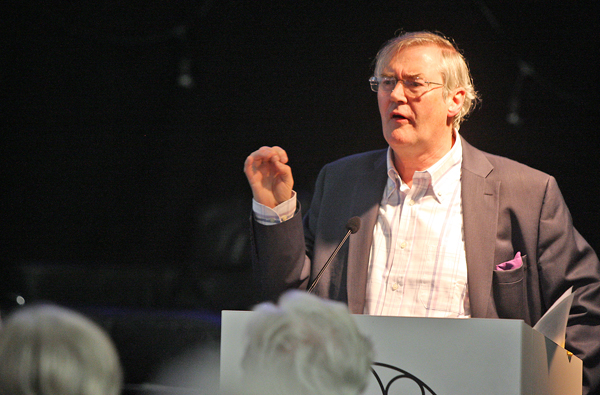 LECTURE: Historian Dr Eamon Phoenix will return to the Duncairn Centre for Culture and Arts for the new season of talks

A series of talks on the partition of Ireland and its lasting impact on the island kicked off this week at the Duncairn Centre for Culture and Arts.

‘Towards a Divided Island’ has been organised by the 174 Trust the Duncairn with five eminent historians lined up to cover different aspects of the post-WWI and Easter Rising period.

Each talk will be followed by a discussion in a bid to find out how the events continue to affect us today, according to Rev Bill Shaw, director of the centre.

“This will continue the decade of centenaries, we did the Easter Rising and the Somme so we’re leading up to the Treaty and the Civil War now to focus on that period as a way of informing but also to stimulate conversation about where we are now,” he said. “How did we get divided and where do we go from here?”

The idea for the talks came after the positive response to a number of other historical lectures held over the past 12 months.

“We did the pilot series on historical characters connected with North Belfast last spring, people like Winifred Carney and Thomas Sinclair, because we felt that that was something we wanted to expand. During the summer with Féile we had Dr Eamon Phoenix’s talk which was fabulous and we are trying to build on that.

“We put that together as a one-off but have had such a positive response we decided to do something more and that’s how the Towards a Divided Ireland series came about.”

It’s just the latest expansion of what the Duncairn offers, said Bill.

“Ray Giffen has done a massive job in establishing the Duncairn as a traditional music venue but we wanted to show there’s more going on here related to talks and discussions and we want that to be a regular part of our programme.”

Last night’s talk on the 1918 general election will be followed on following Thursdays by The IRA in Belfast, James Craig and the Ulster Unionist Leadership, The Labour Movement, Irish Women and Political Change, and the Irish Civil War.

Meanwhile, a pioneering partnership between Belfast and Manchester will be established through a shared history of Irish traditional music.

Manchester boasts one of the largest Irish communities in Britain and over the years has produced world class traditional musical talents and on Saturday night the Manchester Irish Night will celebrate this contribution with performances from Mike McGoldrick, Emma Sweeney and Ange Durcan and Fiona Brown with special guests. Ray Giffen from the Duncairn said the weekend of events would shine a light on a little known part of Irish music.

“The standard of traditional musician Manchester has produced rivals anything in the mainstream music world and we are delighted to be able to get some of the finest of these performers to come to Belfast this weekend. It will be a fantastic series of gigs.”