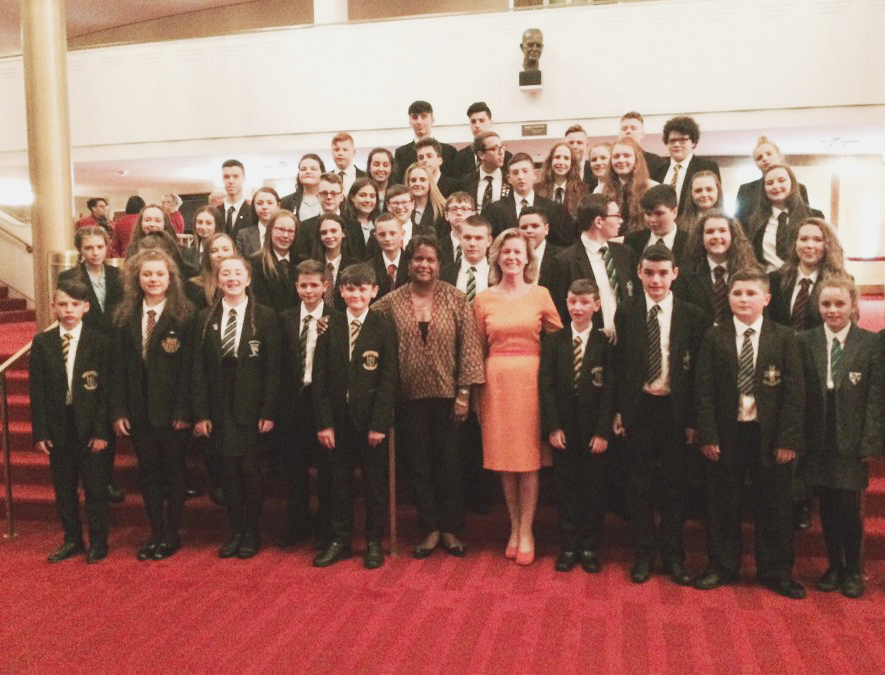 IN TUNE: The Harmony North choir after their performance at the John F. Kennedy Centre for the Performing Arts in Washington DC

A choir made up of young people from schools in North Belfast have performed in Washington DC to celebrate a centenary of Irish music.

Harmony North joined the all Ireland Camerata Ireland orchestra at the John F. Kennedy Centre for the Performing Arts on Saturday where a number of musicians including Belfast poet Michael Longley also performed.

A total of 48 young people from nine post-primary schools in North Belfast travelled to the US capital for the concert. As well as performing the US premiere of Dusty Bluebells, the choirs performed She Moved Through The Fair, Cantique de Jean Racine and Danny Boy.

Camerata Ireland and Barry Douglas rounded off the evening with Beethoven’s Piano Concerto No.5, ‘Emperor’.

The project, which will encompass over 10,000 young people, was first proposed by Hazelwood College as a legacy project in its 30th anniversary year and is the first project of its kind aiming to increase cultural understanding and mutual respect through music.

It is hoped that through a new dimension of learning the project can raise the aspirations, self-esteem and cultural awareness of young people in North Belfast, while projecting a positive image of the area.
Barry Douglas said travelling to the United States was a big deal for the young people.

“It is a real honour for Camerata Ireland to be asked to take part in this festival with musical talent from both north and south,” he said. “I am doubly thrilled that we were able to accommodate my suggestion of being joined by the young people of the Harmony North choir.

“In an incredibly short space of time these singers, under the guidance of Dónal Doherty and with the support of their teachers and parents, have come such a long way musically.

“Some of them have never sung in a choir before and to be making your debut in the Eisenhower Theatre in Washington is a dream come true for us all and I hope an inspiration for the other choir members back home. I’m sure we will all go on to even greater and better things.

“Camerata Ireland is grateful to the Arts Council of Northern Ireland, the Northern Ireland Bureau and Tourism Ireland for their generous financial assistance and help enabling us to attend this event.

“Camerata Ireland is also grateful to our Global Sponsor, Randox, for their continued support.”

The young people stayed for five days in Washington where they visited Capitol Hill and the Smithsonian museums.

Harmony North has been supported in their first year by the Integrated Education Fund, Tony Carson, the Belfast Trust for Integrated Education and staff and parents of all the participating schools. As part of their fundraising efforts they have produced a limited edition framed print of Dusty Bluebells, signed by Barry Douglas and Michael Longley. Contact Bronagh McLaughlin for further details on bmclaughlin257@ c2kni.net or 028 9077 4202.