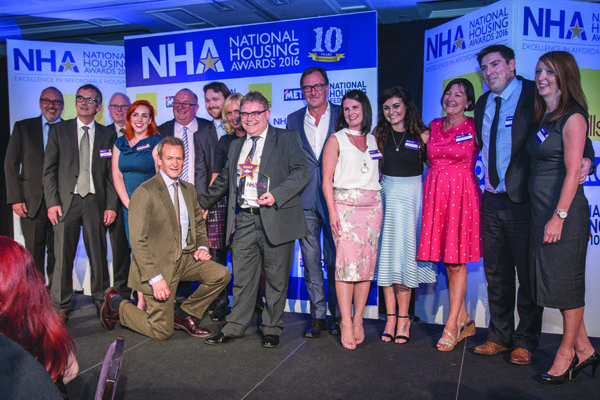 A £9.2 MILLION social housing scheme in North Belfast has beaten stiff competition to be named the UK’s Best Regeneration Project at the annual National Housing Awards 2016.

Completed in two phases, the Limestone Road scheme has revitalised a once-abandoned residential area and increased community confidence to the point that a security barrier in Newington Street was removed after almost three decades. The success of the scheme has also encouraged and enabled redevelopment work to start in the nearby Long Streets area of the New Lodge.

Gary Dugan, Chief Executive of NHA, said: “This is an award that belongs to the communities of North Belfast as much as us. The project has shown how collaborative working between a housing association and the people we serve can bring significant long-term benefits.

“A concerted effort on both sides of the interface and support from our statutory partners has injected new energy that is reinvigorating Limestone Road and nearby neighbourhoods.”

North Belfast SDLP MLA Nichola Mallon added: “I want to offer my warm congratulations to Newington Housing Association on a great achievement. To be recognised by industry and sector leaders is a huge honour and it’s richly deserved.

“The Limestone Road development demonstrates what can be achieved by ingenuity, creative thinking and bold leadership when it comes to housing-led regeneration, transforming an interface into a home for so many families. It’s a testament to the hard work of staff, board members and local residents that this development has been given such a prestigious and well earned honour.”

Regarded as a ‘flashpoint’ during The Troubles, high levels of civil unrest and community division have historically complicated efforts to put existing housing and land to their best use to meet acute housing need in the area.

Last year the collaboration between Newington Housing Association and DCP was recognised at the CIH Awards where it collected the ‘Working Together’ Award. The Limestone Road development also claimed a hat trick of awards at the RICS Northern Ireland Awards 2015.