North heading for a nuclear disaster 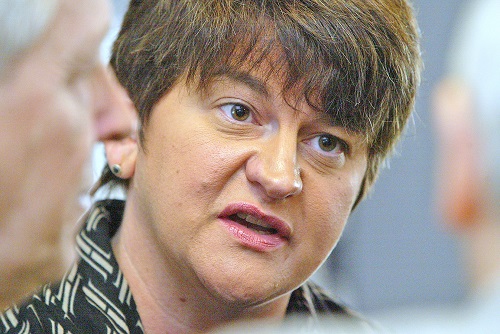 Arlene Foster is a conflicted woman. I don’t mean that she isn’t interested in conflict – as leader of the DUP, Conflict is her middle name. Her predecessors took a similar line. Ian Paisley promoted conflict with the same zeal he brought to denouncing the Catholic faith; and who could forget Peter Robinson’s remarks about sending a Muslim to the corner store for milk? No, the conflict for Arlene is one of Arlene vs Arlene.

Like the rest of us, she is confronted with the shambles we call Brexit. Yes, her party campaigned for a Leave vote, but only in the way that a turkey might gently gobble its affection for Christmas. Saying the acceptable thing but praying it won’t come to pass. The DUP and Arlene were for a Leave vote because they knew their followers enjoy talk of the authority of the Mother of Parliaments and the need to stem immigration.

However, Arlene and her party also knew that were the EU to withdraw its support for agriculture, for example, or for road-building, the north-east of our island would feel a grip of death on its windpipe. Not only would vital subsidies come to an end but we little North-Eastern Irish would be faced with a hard border between ourselves and the state to the south. Not so much bad news as a nuclear disaster.

Arlene’s public presentation of her conflicted state came in two instalments. The first was a feisty one, when she slapped down Enda Kenny’s suggestion of an All-Ireland, oops, All-island conference for all interested parties on the island to discuss the dangers that Brexit confronts us with. Arlene couldn’t afford to show herself dancing to the tune of a Taoiseach, so the lady said No. But at the same time she needed to get talking with the south to try to prevent a hard border between our north-eastern Nirvana and the south. So having shown no Tea-shock would tell her what to do, she swivelled 180 degrees and went into a huddle with Enda and others.

But if Arlene’s relationship with the south seems tricky, consider the UK’s relationship with the EU.
Brexit is going to happen. To that everyone bar the Lib Dems and Tony Blair seems resigned. Even if there’s a vote in Parliament, MPs will be too afraid to look like they’re flouting the will of the people and will troop obediently behind the Brexiteers.

So can we expect that sometime inside the next two years approximately, the UK and the EU will shake hands, maybe give each other a little hug before parting? Um, no. Theresa May is not going to emerge from EU negotiations bowed down by going-away presents. On the contrary, she’ll emerge from negotiations with two black eyes, torn clothing and a pronounced limp. Metaphorically speaking.

Any teacher could have predicted this unhappy outcome. If you’ve a child in the class who announces loudly that s/he is fed up with you and your stupid class and s/he’s off, you as teacher have two courses of action open to you. You can send the child on his/her way, with your best wishes and promises of continuing support; or you can tell the little punk to make your day and watch s/he doesn’t let the door hit his/her bottom on the way out. Make his/her exit comfortable and you’ll have a class where everyone wants some of that.

So yes, the EU is going to give the UK a right good seeing-to, with a hard border in Ireland being just one of many blows which will rain down on the unhappy Mrs May.

Because the DUP leader knows all this, we have Arlene (Half A) happily whistling about making a success of Brexit, while Arlene (Half B) is perspiring heavily, wondering what in God’s name she’s supposed to do when Brexit brings north-south trade to a juddering stop at the border.

If it wasn’t for the money and the power, you’d nearly feel sorry for the Pride of Fermanagh.

No, no, Tom – sit down, please. We’re not talking about you.