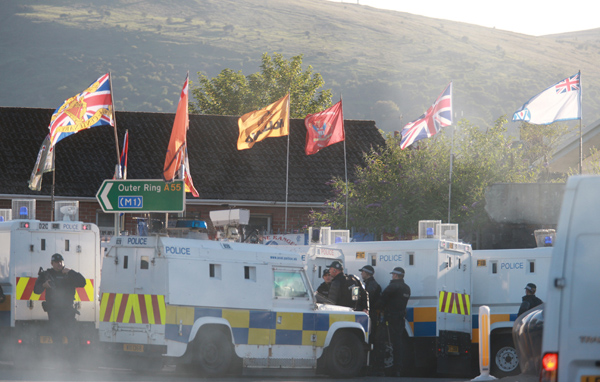 A well-known member of the nationalist community in North Belfast has been engaged by loyalists to try and negotiate a solution to the Twaddell Camp blockade, the North Belfast News has learned.

The man, who is prominent in community and GAA circles, has approached both the Crumlin Ardoyne Residents’ Association and the Greater Ardoyne Residents Collective with a proposal that the Orangemen be allowed to complete their return to Ligoniel as part of a wider “carnival” type parade that would include GAA symbols so both sides of the community are represented.

The North Belfast News understands at least one face to face meeting with representatives of CARA has taken place, but that GARC declined a meeting.
The ambitious plan is known in political circles with Northern Ireland Labour Party member Abdo Thabeth, who ran for the Northern Ireland Representation Committee in the recent Assembly election, saying he was aware of efforts to turn the banned parade into a “Notting Hill carnival-type procession”.
CARA spokesman Joe Marley said they had been approached with a proposal but insisted the solution to Twaddell would only be found though dialogue with residents.

“I would say there are well intentioned but misinformed people out there and the only solution to this is through face to face talks,” he said. “It’s only by consensus that we will be able to get anywhere.”
The protesters based at Twaddell have been maintaining an on-off vigil on the Housing Executive land as a protest at the Parades Commission’s determination that the 2013 July 12 return parade not pass nationalist homes on the Crumlin Road at Ardoyne shops.

Meanwhile, the Parades Commission is yet to deliver a determination on the Tour of the North parade on Friday, June 17.
The Belfast Orange Hall United Districts Committee has applied for 800 people and 11 bands to walk through a number of majority nationalist areas, including the lower Cliftonville Road, the top of Duncairn Gardens and Carrick Hill.