OAP summonsed for feeding the horses 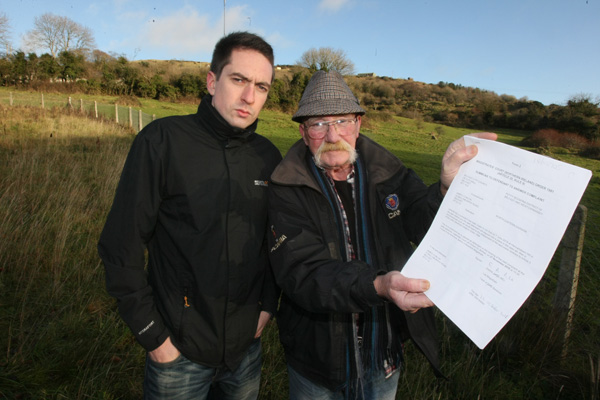 A WEST Belfast animal lover is calling on Belfast City Council to drop their case against him after he received a littering summons for feeding horses in a field.
Ballymurphy man Seamus Conlon was feeding a friend’s horses in a field on the Hannahstown Hill in June of this year when he was approached by two men who asked him to stop what he was doing.
Seamus says he told the men to mind their own business but later received a fixed penalty fine in the post which he refused to pay. He’s now been issued with a summons and was due to appear in court on Wednesday morning – but the hearing was adjourned for the second time.
Speaking to the Andersonstown News, a gobsmacked Seamus said: “I’ve kept horses all my life, they are beautiful creatures. I am in poor health and looking after these horses brings me a real sense of joy.”
Seamus lives with COPD, is diabetic and has suffered multiple heart attacks.
He continued: “I was giving bread to the horses, minding my own business, and these two characters approached me and demanded I stopped. This field belongs to my friend and I have permission to feed these horses. What harm was I doing? I don’t need the stress and strain of this.”
Seamus described the encounter that led to the series of events that has left him baffled and angry.
“I pulled my car up that morning and walked over to feed the horses, these two fellas shouted over at me and told me to stop. I told them to take themselves off, they said they were ringing the peelers and I told them to get whoever they wanted. One of the men said the birds were lifting the bread I was feeding the horses and dropping it in his garden, absolute nonsense. I got into my car and drove off. Your man must have taken my car registration because I received a fixed penalty notice in the post.”
Seamus added: “I turned up to court on the arranged date and the complainant never bothered turning up. I showed up again on Tuesday and the same thing, he never weighed in again. Now if I didn’t bother turning up I’m sure they’d have something to say about that. This is a complete and utter waste of Belfast City Council time and money and I am urging them to drop it.”
Local People Before Profit Councillor Matt Collins said: “This whole situation is ridiculous, whoever made the decision to issue a court summons to Seamus perhaps needs a basic crash course in what constitutes illegal or criminal behaviour. This summons should be withdrawn and Belfast City Council should apologise to Seamus immediately.
“It’s also worth saying that Seamus is taking this in his stride and isn’t backing down – and fair play to him for that. But other people would likely be intimidated by this. Nobody wants brought up in front of a court and especially for something so absurd. I’d imagine the vast majority of people would agree with me that Belfast City Council and the powers-that-be in this city ought to put their time and energy into something more productive, instead of hauling a pensioner up in front of a court for feeding horses.”
A spokesperson for Belfast City Council said that as this is an ongoing matter they would not be making any comment.