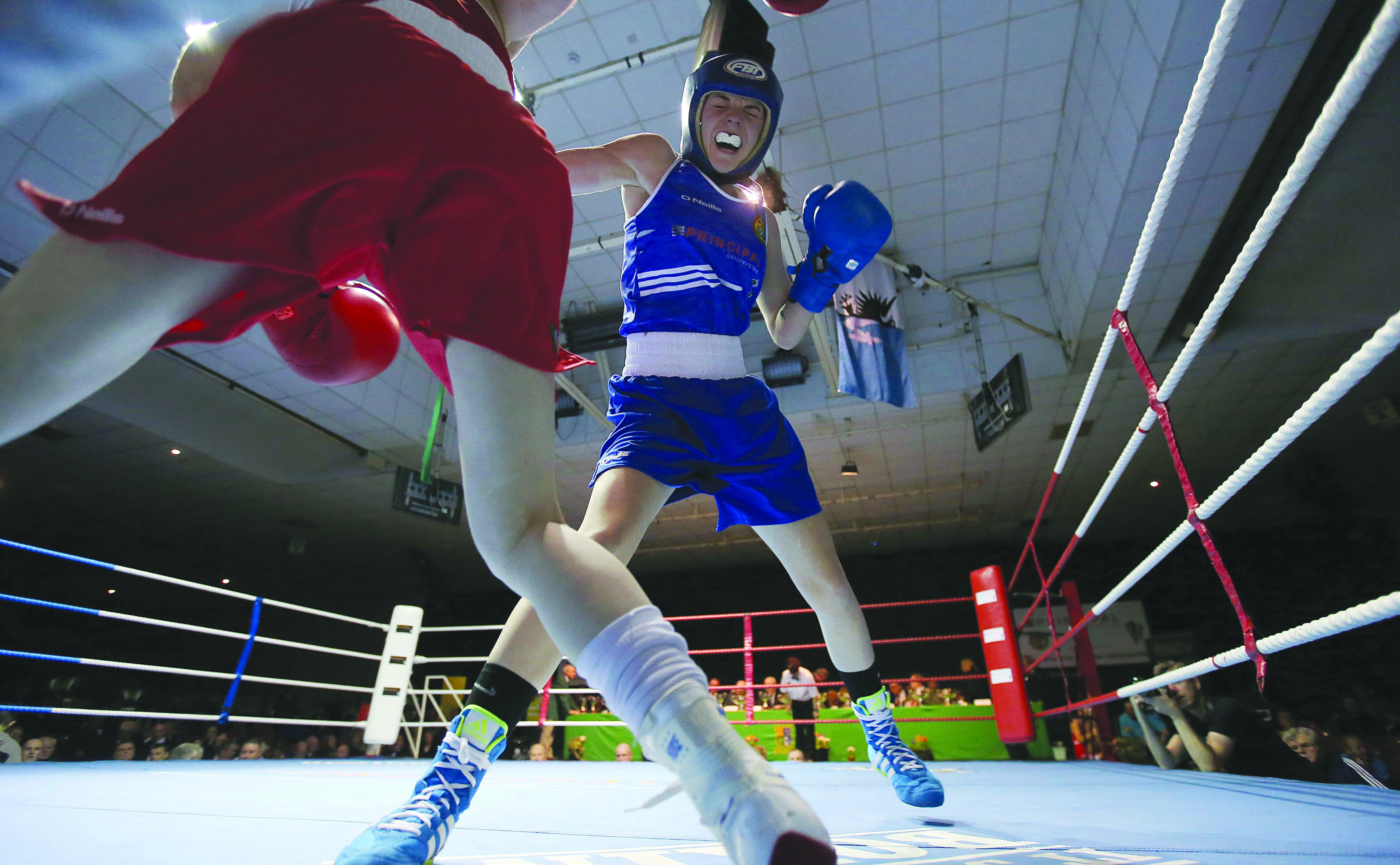 Kristina O’Hara goes on the attack during Friday’s final

WINNING a first Irish Elite title is a cause for celebration and Kristina O’Hara did just that after defeating Shannon Sweeney in the 48 kg final at the National Stadium on Friday night.

The St John Bosco girl won on a unanimous decision against the St Anne’s southpaw who battled gamely, but was well beaten on the night.

O’Hara was sensational throughout, judging the distance perfectly as she took the fight to Sweeney from the off and scored with a couple of rights early on. The success of O’Hara bloodied the nose of Sweeney in the second who was running out of ideas and was forced into a standing count in the third following a huge right hand.

O’Hara was picking off the St Anne’s girl with lefts and rights and was in complete control, her tactics perfect on the night as she had her hand raised at the end and was justifiably thrilled at being crowned national champion.

“It's every boxer's dream to be champion of Ireland. It's unbelievable, I feel brilliant and so proud,” she said.

“I changed clubs, moved from the Emerald to the Bosco. I have to give so much credit to Harry Murray who was my first coach. He encouraged me every day, had me in the gym every day and he is the reason why I won this Irish title.

“Of course, I have to thank my coaches and sparring partners from Gleann, Townland and Padraig Downey from my own club. These kids are going to take over the world. I have them to thank for me winning this.”

It was clear from early on who was going to prevail in this final and O’Hara explained that the change in women’s boxing from four two-minute rounds to three rounds of three minutes worked to her benefit.

“Our game plan was to keep her under pressure the whole fight and up the gears when I needed to,” she said.

“We knew what my fitness was and was suited to the three-threes so I was flying through them.”

With the Irish title now secured, O’Hara will look to continue her development this year before turning her attention to the Ulster Seniors that are due to take place in September with a place on the team that will travel to the Commonwealth Games next year up for grabs.

“Commonwealth Games are next year, so I will go for them at 51 kilo because there is no 48 and hopefully I will beat anyone who is there,” she added.

“The way I'm feeling now, I'll beat anyone in the world. I'll keep boxing at 48 until I have to go to 51 for the Ulster Seniors that will now be in September, so I just have to train hard for them now unless anything else comes up.”