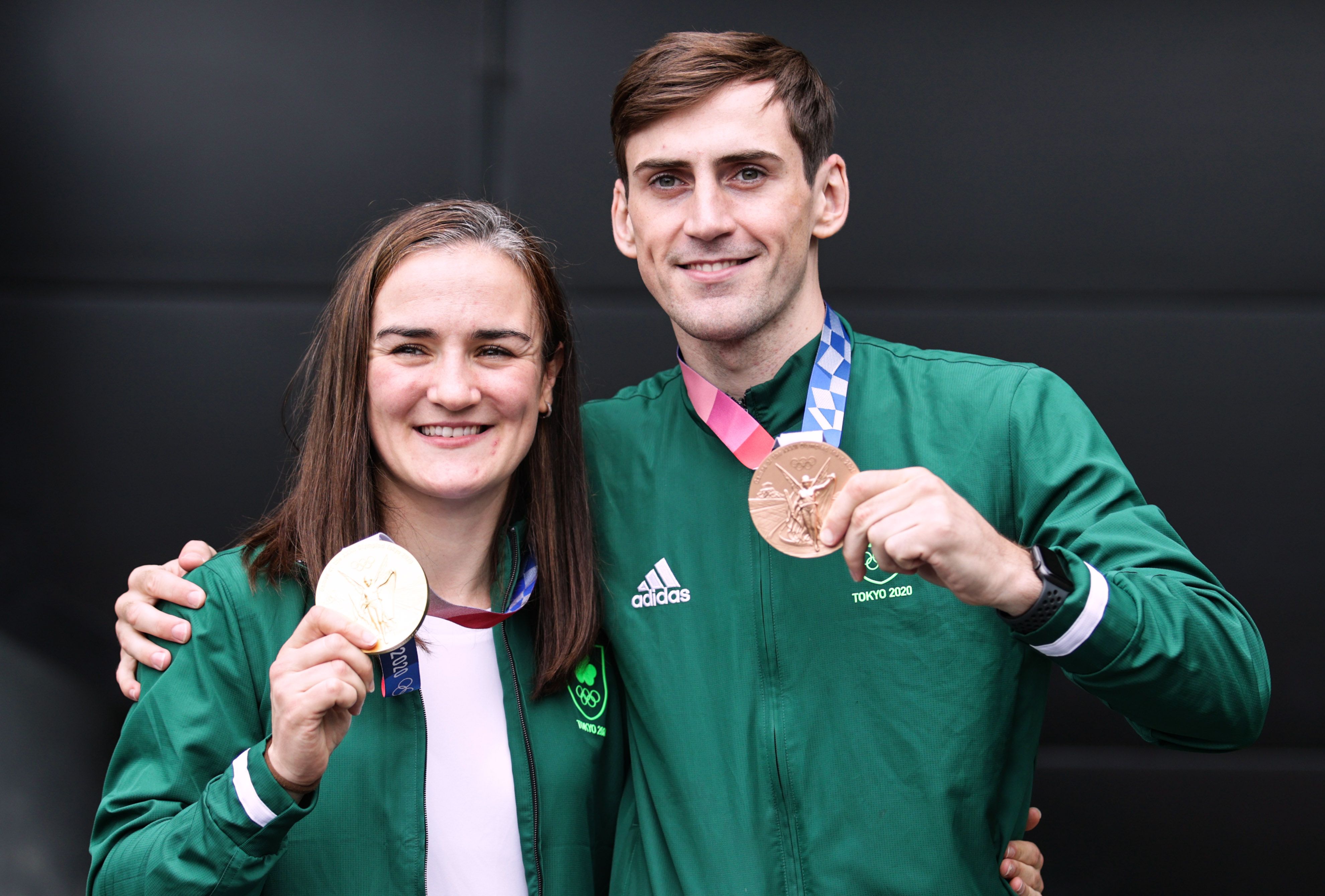 IT was a heroes' reception at Dublin Airport yesterday for Ireland's Olympic boxing medallists as family and friends were there to greet the new golden girl, Kellie Harrington and bronze medal winner Aidan Walsh after their exploits in Tokyo.

Due to restrictions, the numbers were not as large as would usually bee expected, but there was still a joyous mood as the medal-winning pair touched down on Irish soil.

The West Belfast man and his sister Michaela were greeted by their parents, Martine and Damien, plus relatives, partners and club coach at Monkstown ABC, Paul Johnston, as they filed through the terminal to rapturous applause from all in attendance.

Walsh's rise from young hopeful to Olympic medallist has been rapid as just over two years ago, the Blacks Road man was still vying to win his first Irish Elite title that would open the door to the team that would head to the European Qualifier, but his run was timed perfectly with his first national senior title in late 2019 and he hasn't looked back.

"It seems so surreal," the 24-year-old said on a media call shortly after arriving back in Ireland.

"All of those people standing there when it's usually me in the crowd to support other people. To be standing on the other side of it is crazy, but I just feel extremely lucky and grateful.

"All of the team deserve to be standing here with a medal, but first and foremost I'm an Olympian alongside my sister and a great team - everything else is a bonus.

"I've always been boxing behind the scenes, but all I needed was the opportunity and my club coach at Monkstown, Paul Johnston, has helped me massively.

"In terms of how long I've been on the Irish team, it's only been a few years and to come away with a medal is amazing."

Walsh was unable to box in his welterweight semi-final against Britain's Pat McCormack when sustaining an ankle injury after his quarter-final win that guaranteed bronze.

However, rather than having any regrets, the 24-year-old accepts is was just one of those things and is rightly proud of what he has achieved.

"I think you just have to be positive in life and although that situation was hard, the positive I took was that I'm an Olympic medalist," he insists.

"What came after that I couldn't control so I took it in my stride. It was physically impossible to fight and that's it."

With the Paris Games just three years away, it will be a shorter than usual Olympic cycle but many will look to Walsh as one who could lead the Irish charge.

That is if he remains as an amateur boxer, but on Tuesday he said the only thing on his mind is enjoying some down time and kicking back after what has been am intense few moths between the Qualifiers and Olympics.

"I just want to see how far I can grow over the next few years and push myself," he insisted.

"There are great times ahead and plenty of opportunities. To be doing this alongside my sister fills me full of more joy than medals."

"With the Qualifiers being so close (to the Games), the last year has been so continuous with the boxing so I'm looking forward to taking it easy and relaxing for a few days to get back to normality.

"I'm going to go to my caravan at Carnlough with my girlfriend; have a Chinese, a tin of Coke and lots of sweets. I haven't had sweets in so long so I'd love a packet of Haribo."

If it's Haribo for Walsh, Harrington said she will enjoy some cake and scones after the Dubliner arrived back in Portland Row on an open-top bus on Tuesday evening.

It was an emotional return for the 31-year-old who said she hadn't slept since her victory in Sunday's final and said it's just rest and relaxation on the agenda for the foreseeable.

The gold medal-winner's victory completed a wonderful Games for the Irish team and Harrington's personality has won the hearts of a nation, but her only concern was for those from here community in Dublin's north inner-city.

"I'm glad they are finally being seen, as my community is absolutely smashing. In the good times and bad times they are always there and get behind their own. I love them and when I do see them, I think I'm going to start bawling my eyes out.

"I think for me to fully realise what's going on, it will take a couple of weeks to not be around a team for me to realise what has happened and what I have achieved.

"I'm not a fame hogger - that's not me. What is fame? I'm about humility. You can be famous and bit of a you-know-what, but my people in my community mean the most to me."