On the ready for more festival clues this weekend 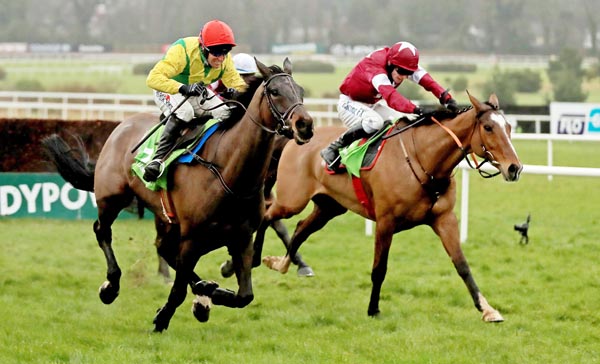 RYANAIR BOUND: Sizing John has been cut by Sean Graham after winning the Irish Gold Cup on Sunday

We have  just under four weeks to go to Cheltenham 2017 and festival fever is already starting to hit local punters.

A few betting clues were got at the weekend for a few festival races and the mighty Alitor is now 3-1 on with Sean Graham for the Arkle after sauntering home at Newbury. On the same card, Native River won the Denman Chase with a bit in hand and has been cut to 7/2 for the Gold Cup.

Top Notch was another impressive winner at Newbury on Saturday and gets a 4/1 quote from local layer Sean Graham for the JLT.

On to Sunday’s action and Sizing John edged out Empire of Dirt and Don Poli in a cracking Irish Gold Cup. The question is: What race does the winner go for?

We think the Ryanair and he has been cut to 5/1 for that race while runner-up Empire of Dirt could be a Gold Cup horse with your local layer cutting the Gordon Elliott-trained horse to 16/1 for the festival feature.

There will be more Cheltenham clues this weekend at Ascot, Haydock and Wincanton and Gold Cup hope Cue Card is odds-on to win the Ascot Chase.

No Thistlecrack this time and he should win this one if he jumps round safe with Taquin Du Seuil the forecast bet.

Beyond Conceit (1.15) looks the bet in the first race on Saturday take note - he is festival bound and was impressive on his debut at Newbury while Label Des  Obeaux looks the one to beat in the Grade 2 Reynoldstown Novices' Chase (1.50).

Over at Wincanton we have the Grade 2 Kingwell Hurdle (2.45) and Champion Hurdle contender, Yanworth (4/5) will have his last prep-run before the festival and should see off the threat of Sceau Royal.

Over at Haydock we have the Grade 2  Albert Bartlett Prestige Novices' Hurdle (3.45) and we are siding with the Skelton team in this one with No Hassle Hoff (5/2) and the progressive The New World the most likely danger.

We end with the wide-open Betfred Grand National Trial Handicap Chase  (3.10) and, if you work this race out, it may well pay for your punting on Saturday.

We like the Nigel Twiston Davies-trained Blaklion (5/1) who should relish the three mile, four furlong hike and Virak at 14/1 catches the each-way eye for the Paul Nicholls yard.

It’s FA Cup Fifth round weekend and to be honest there’s not much value around in the competition. You will not get rich with this odds-on acca but a win’s a win at the minute.

On to the weekend draw trixie and we as usual sit on the fence with these games:  Ipswich v Leeds; Morton v Falkirk and Bradford v Bolton.