OPINION – ANDRÉE MURPHY: If people were shocked when Stormont collapsed, they should have their eyes wide open 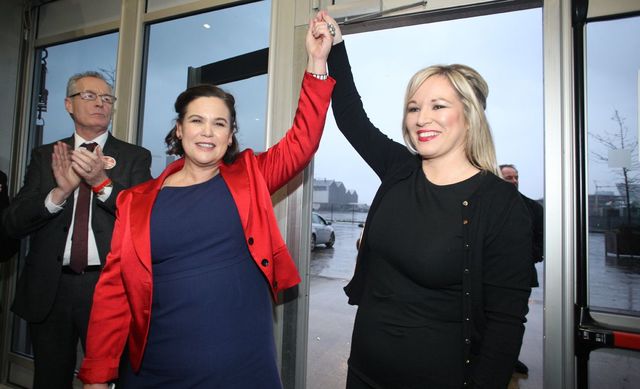 FRANCIE Molloy MP is a long-standing Sinn Féin activist. He is not a controversial figure within Sinn Féin. The only time he was publicly out of step with the party was in 2015 when he was vocal with a worry about the new super councils. He was suspended from the party for two short months, but everyone seemed happy when he returned. So it was a surprise when he tweeted this week that nationalists had been “sold a pup” with the Good Friday Agreement.

Just as change seems realisable the rules are being changed on the airwaves by politicians with a vested interest in the maintenance of partition. “Consent of the majority” for unity is being dismissed as “divisive” while maintenance of the union goes unchallenged. Indeed, a minority veto on change is presented as credible as “consensus” is promoted.

Michelle O’Neill and Mary Lou McDonald regularly promote the Good Friday Agreement, in all of its parts, as they engage with the reality that while republicans have been held to the letter of their commitments, the British government has torn up the principle of consent by forcing Brexit on our population and undermining the Human Rights Act.

We were sold a pup with the GFA no commitment from either Dublin or London to deliver for Nationalists or Republicans it was just a bluff. https://t.co/nyHfE7asnO

Meanwhile pro-partition “nationalists” (yes, an oxymoron) appear more fixated on controlling, or even stopping, constructive conversations on constitutional change than they are on British government attacks on our peace agreement.

Of course, it is possible that Sinn Féin is deeply disquieted by their MP’s comments, but at the very least his tweet should begin a wider conversation on what a peace agreement should mean 22 years after its signing. For agreements to succeed in the long term they need to be live and nourished. Ours has been starved and left to wither.

In 2017 we entered a phase when all actors should have recommitted to its principles and reinvigorated it for modern purpose. In 2018 the 20th anniversary led to incongruous flower throwing. We heard words like “recommit” whose translation looked more like purposeful neglect.

While the institutions were collapsed many in the nationalist community felt they were done with Stormont and we were entering a post-Good Friday Agreement era. The health crisis dragged Stormont back to life, but on its own that did not create the conditions for a resurrection of the Good Friday Agreement architecture. The pandemic emergency meant that ministers bedded into place quickly as local cooperation was essential, so Stormont got fair wind. However, the fundamental questions that led to its collapse and nationalist disillusionment have not gone away.

If London and Dublin continue to pretend all is well and that their fake agreement in January is anything other than not worth the paper it was written on, they are living in that fool’s paradise that the late Martin McGuinness referred to in early 2017.

There are serious problems brewing. Francie Molloy’s tweet hinted at just a part of it. If people were shocked in 2017 when Stormont collapsed, they should have their eyes wide open now.