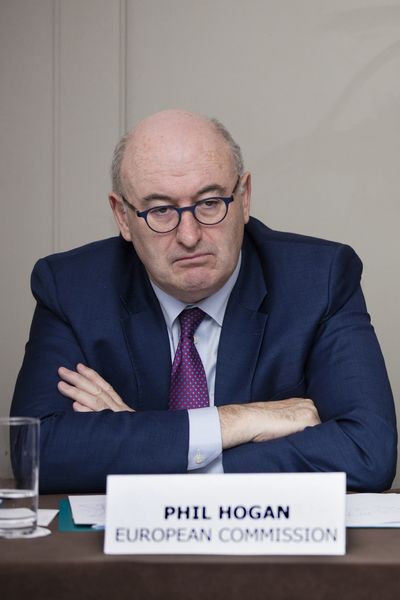 Covid-19 regulations have claimed the scalp from the pate of EC Trade Commissioner Phil Hogan.

He maybe felt that he was indispensible for trade talks with Britain but found out he wasn't.

The former Commissioner ignored quarantine and restrictions on social gatherings and incurred the wrath of Taoiseach and Tánaiste and went — before being shown the door by EC Commission President Ursula von der Leyen.

His departure was preceded by a deputy leader of Fianna Fáil and a Leas-Chathaoirleach of the Seanad  (FG) as well as the abject apology of Supreme Court Justice Woulfe.

In the North, the second wave persists with cases in Craigavon Area Hospital and regulations are tightening with serious on-the-spot fines now being imposed.

There are some bright spots with Cambridge University researchers saying that they may be able to put some fourth phase test data before regulators before Christmas and Chinese company Sino Pharm already giving vaccination to key workers.

But as we wait for vaccination there is no substitute for the traditional public health methods of quarantine and hygiene augmented by contemporary concepts of social distancing, face masking and family bubbles.

There is a need for social discipline in these times and the concept that we are doing these things for the overall benefit of society— a concept which Mrs Thatcher  decried but has always been in our Gaelic culture.

Maybe we will be able to look back on these times and reflect, paraphrasing Churchill, that never in the history of mankind has so much been given by so many to everyone.

In the USA they are distracted by communal violence and internecine elections and are paying a high price by ignoring the pandemic. ‘The Fall of the Roman Empire’ comes to mind.

This week two medical commentators on Channel 4 posed the question, was it possible to avoid a second wave? After forty minutes it was evident that the answer was no.

Indeed, we are in the midst of the second wave with more cases but fewer deaths but also with the recognition that dexamethasone may attenuate the worst systemic effects of the virus and that remsividir (Relenza) may help further in attenuation.

There has been concern in the health service about excess deaths or mortality over and above what is to be expected at this time of the year.

Now there is additional concern about excess morbidity or sickness over and above what is to be expected at this time of year manifesting itself in terms of waiting lists —  with over 311,090 awaiting appointments or procedures.

Of particular worry are those whose circulation might be compromised by lack of care of blood pressure and diabetes and in whom Covid-19 or lack of care without it might lead to premature amputation of a limb.

These are the hidden costs of the pandemic.