OPINION: Our very own Great Wall of China will have Louis MacNeice spinning in his grave 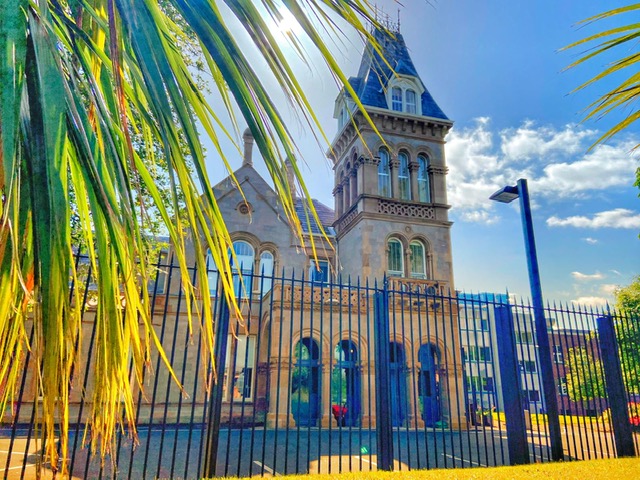 AMERICAN BEAUTY: The US Consulate at Danesfort with a single railing divide from neighbouring apartment complex

Is anything more awfully emblamatic of this time of lockdown in which we live than the Great Wall of China at the Sino superpower’s consulate on the Malone Road?

One of South Belfast’s finest houses transformed into a Green Zone bunker — and nary a finger lifted in protest by the same authorities who go postal if as much a window sash is replaced in any of the neighbouring houses.

And how Louis MacNeice must be turning in his bard’s grave.

For the magnificent building which once spoke to his soul as home and muse is now reduced to an ugly fortress.

For two decades, this proud mansion symbolised our bright side as headquarters of the Arts Council.

As we know all too well in Belfast.

And I speak with some authority: I grew up beside the British Army encampment in Andersonstown known as Silver City.

Why is this allowed to continue unchecked? And if local elected councillors want a ‘Stop’ notice issued by @belfastcc why doesn’t that happen? pic.twitter.com/FbUKYrDTlT

Taking walls down? Well, that is a real craft.

One person who is a  master of that trade it is community battler Martin McBurney — who has to look out at this eyesore every day.

Why we are being gifted this gated garrison is anyone’s guess. Fear of the Uyghur minority who have been demanding an end to the Bejing regime's harsh rule? Hardly, since China has interned a million of them in latter-day concentration camps.

Or is this a Citadel to Covid? Supermarkets are putting up perspex — perhaps this is just a premium level disease defence.

Whatever its purpose,  we’re entitled to demand  that this awful edifice be removed.

If the US Consulate across the road and the Polish Consulate, effectively next door, can live without Long Kesh-style sidings then so should the Chinese mission.

And the last word. Let’s leave that to the young Louis MacNeice who composed his famed poem ‘Snow’ while looking out from the back sitting room on the ground floor of his erstwhile home.

A home to which he gave his name: Louis MacNeice House.

Perhaps the Chinese Consul General will put that on a corrugated iron plaque outside their bunker!.