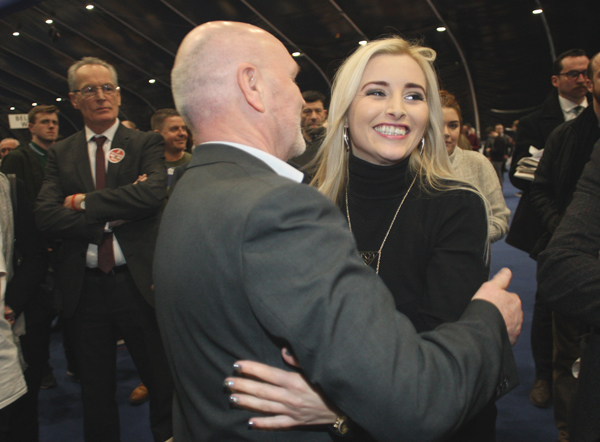 THERE were jubilant scenes at the Titanic Exhibition Centre on Friday as Sinn Féin’s Órlaithí Flynn topped the poll in West Belfast with 6,918 first preference votes, surpassing the 6,725 quota.

Over 66 per cent of eligible voters took to the ballot box in West Belfast on Thursday ensuring that this was an historic election for Sinn Féin.

Speaking after the election a delighted Órlaithí Flynn said: “Friday 3rd March 2017, what a day to remember. I don’t even know where to start. I feel totally elated and overjoyed – what a proud moment for republicans across this island.

“I can’t thank people enough for all of the support, help and guidance I have received over the past few weeks and to each and every person who made the effort to come out and vote for Sinn Féin in West Belfast, all I can say is that you have helped to create history. Go raibh mile maith agaibh.

“I'm looking forward to working as part of a strong Sinn Féin team in the Assembly, a strong team in West Belfast, to deliver for the people that have put their trust in us.  So I suppose the real work starts here, to make sure that the institutions work on the basis of equality and respect for all citizens.

“Locally I will work as part of fantastic Sinn Féin team in Colin.  I'd like to say a big thank you to everyone that voted Sinn Féin, every single vote cast was an important vote.  I will continue to work hard for every person in my constituency, to build on everything that has been done by my predecessors and to continue to deliver for all citizens.”

It was an election that saw the Sinn Féin surge take them to within one seat of the DUP, who lost ten MLAs. The SDLP held their own and are now the third largest party, while UUP leader Mike Nesbitt resigned as his party lost six seats. With Unionists holding 40 of the 90 Assembly seats, there is no longer a Unionists majority at Stormont.

Thanking voters after the election Sinn Féin MLA Michelle O'Neill said: "In this election the public responded positively to Sinn Féin's message of equality, integrity and respect and returned us with a strengthened mandate and stronger republican representation in the Assembly.

"I want to thank everyone who voted for Sinn Féin, all of our candidates and everyone who worked so hard for this result.

"Throughout the campaign we said what Sinn Féin wins in this election is a win for all and we intend to deliver on that.

"We will use our increased mandate to deliver for everyone in our society to ensure we have equality, integrity and respect at the core of the political process.”

She added: "We will continue to oppose Tory austerity and campaign for designated special status for the north in the EU.

"Sinn Féin is ready to enter negotiations on those principles and we want to see those negotiations start as soon as possible."