Our Dáire gets superstar treatment 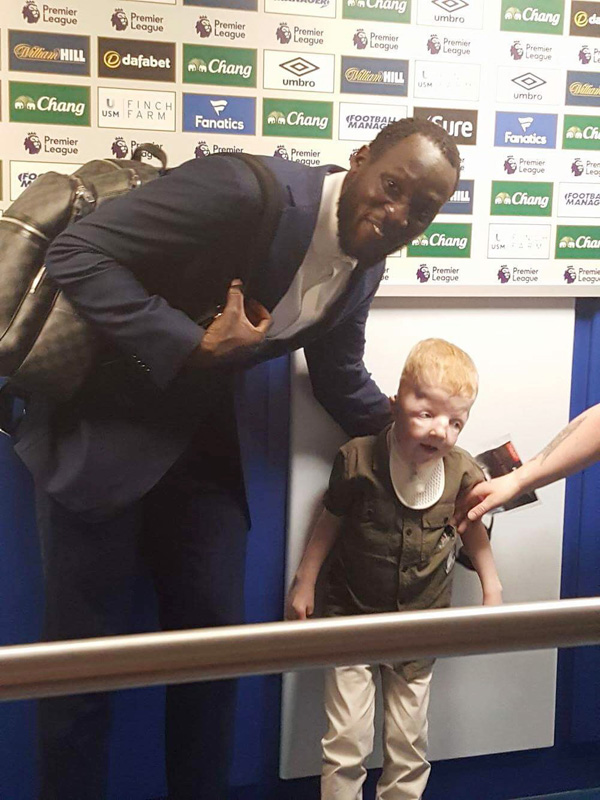 SEVEN-year-old Turf Lodge boy and Everton superfan Dáire Flanagan’s dreams came true at the weekend as he led his beloved Toffees out as they beat Watford 1-0 at Goodison Park.

Speaking exclusively to the Andersonstown News, Dáire’s mum Colette said he had lived the celebrity lifestyle – “and loved every minute of it!” Dáire, who last year won the Andersonstown News Inspirational Youth of the West Award, was born with a rare genetic condition known as Apert Syndrome.

Doctors told his parents Colette and Barry that he wouldn’t survive 48 hours, but he is now a thriving, happy seven-year-old boy who loves Everton FC.

Dáire’s condition means that his family have never been able to have a foreign holiday and the only time Dáire has ever been on a plane was when he was travelling on air ambulance. But thanks to Republic of Ireland and Everton star Séamus Coleman, who sponsored the unforgettable trip, the West Belfast boy had the time of his life at Goodison Park.

Colette said: “We set off last Thursday. Holy Trinity Youth Club loaned us their minibus and that’s how we got to Dublin, we then got the boat to Holyhead and we made our way to Liverpool.

“I don’t think he realised exactly what was happening until we got there. He knew he was going to watch Everton but he was completely starstruck when he got there, everything was a surprise to us as well.

“We thought we were staying in apartments, but when we got there we were put up in the Hilton Hotel. The following day Everton sent a taxi for us and brought us to their training ground, Finch Farm, where we got to meet Séamus Coleman. He gave Dáire a pair of his football boots and his football shirt, he also got Dáire his own Everton top as well as a signed football. He was so good with him, he was more than happy to pose for photos with Dáire.”

After Dáire met sporting superstar Séamus it was time for him to go to the match.

“We then got driven by limo from our hotel to Goodison Park where we had a meet and greet with all the players, the goalkeeper gave Dáire his gloves, he was fine up until he met Romelu Lukaku and then he became totally starstruck, he got really shy around him.”

As if all that wasn’t enough Dáire was made the team’s mascot and led them out holding the hand of captain and England international Phil Jagielka.

“Although Séamus is the captain he was badly injured recently so Phil Jagielka took his place. It was really emotional watching Dáire lead the team out, we are all so proud of him. We were then given a skybox to watch the match from. It really suited us because Dáire can’t tolerate too much noise, so we were able to turn the volume down which was fantastic.”

Colette says she will never be able to thank Séamus and Everton FC enough for the generosity and support they have shown Dáire.

“Everton have been so generous to us, in the skybox we were given unlimited drinks, we had our dinner, nothing was too much trouble. Dáire was given loads of bags containing Everton merchandise and an Everton rig. We were sharing the box with the son of Alan Ball who apparently was a really big deal when England won the World Cup in 1966, so he was over getting his picture taken with Dáire, it was great – Dáire loved being a celebrity!

“After the match we went back to the hotel and two young guys came over to Dáire and gave him more stuff and signed photographs of the players. Even when I brought the kids up to the room one of the players, Brendan Galloway, knocked on the door. He said he wanted to give Dáire a tracksuit and asked could he have his photograph taken with him. It was surreal, these professional footballers were treating Dáire as if he was the superstar.”

Colette added: “We would really like to thank Ciaran Rogan from the bottom of our hearts, he is the one who organised all this for Dáire, he was the one behind the fundraising to get Dáire over to meet his idols, he is a fantastic person. Dáire had an amazing time, I was putting him to bed at midnight and he was still trying to jump about with excitement and he was up from six next morning! He was on a high. It was so surreal, he lived the life of a celebrity for the day.”

An emotional Colette said the family has been blown away by the kindness shown to them.

“I am completely in awe of what everyone has done for us, I don’t know how to even begin to thank people, to be honest. These are memories we never would have been able to build for Dáire only for the generosity of others. I can’t put into words how amazing this was for him and how emotional it was for us. Disney World couldn’t even compete with what Dáire got last week.

“It was amazing from start to finish and is something we will always remember. It was just 100 per cent perfection.”