Our Lady’s pupils on song for top conductor 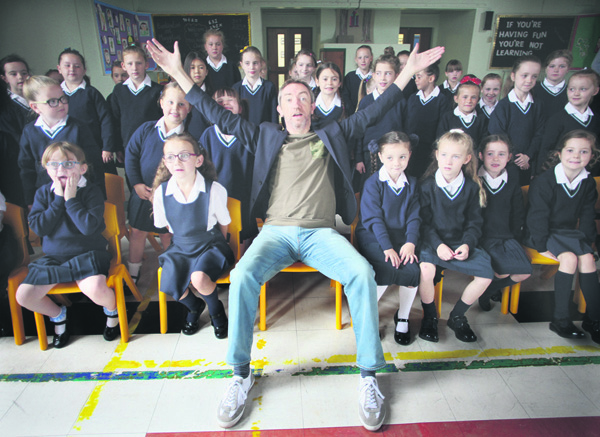 ACCLAIMED conductor David Brophy led the Ulster Orchestra at BBC Proms in the Park on the Titanic Slipways in Belfast on Saturday night.

But before the big event, the classical music celebrity paid a visit to Our Lady’s Girls’ Primary School in North Belfast to lend his expertise to the school choir.

The girls performed ‘Down to the River to Pray’ by Alison Krauss for their guest before the conductor took over to give the girls the benefit of his experience.

“It’s fantastic to be here,” said David. “I am passionate about music education and access to the arts. A lot of my work in the Republic is about social inclusion and arts and performance. You can see what singing does for people, including kids. It’s good for your soul.

“I am passionate about music and have been all of my life. I was a classical music junkie for most of my twenties, then I realised I was getting old and thought I better listen to something that would give me a bit more street cred.

“I rarely listen to classical music now unless it’s on TV, but for these kids, I think music is everything for them. It is important for them to develop the talent that they all already have.”

The 44-year-old qualified from Trinity College Dublin as a Bachelor of Music in Performance before continuing his studies in England and Holland. He is former Principal Conductor of the RTÉ Concert Orchestra and has conducted the National Chamber Choir of Ireland and the RTÉ National Symphony Orchestra, which he led at the opening ceremony of the Special Olympics in 2003 in front of 80,000 people and a worldwide TV audience of millions. The event also included performances with U2 and the largest Riverdance troupe ever assembled.

David then conducted the RTÉ CO for Queen Elizabeth on her state visit to Ireland in May 2011. He has also premiered works by leading contemporary Irish composers including Frank Corcoran, Raymond Deane, Benjamin Dwyer, David Fennessy and Ian Wilson.

Principal Orla O’Dowd said she was delighted to host the conductor at the school.

“It’s a lovely opportunity for the girls,” she said. “It came about through one of our teachers who sings in a community choir in Belfast and she had the opportunity to work with him earlier in the year.

“It just raises the profile of music in our school and within North Belfast and I hope it raises the aspirations in terms of singing for the girls too.

“The girls have been excited all week. It’s a pity the primary seven girls who left us this year have missed out. They all realise what a big opportunity it is for them.”

During the visit, David taught the girls about singing in high and low notes, gave a conducting exhibition along with interaction and a great insight into his expertise on teaching music.

Next stop for David was the Titanic Slipways on Saturday night for the music spectacular that is the Last Night of the Proms.

The event, which is now in its 15th year, brought together some of the most internationally acclaimed performers from home and around the world.

They performed alongside the Ulster Orchestra, under the baton of David Brophy, in a programme combining classical and contemporary music.

The conductor, who bustles on the podium and is famous for his good-humoured enthusiasm for the job in hand, was also able to display his talents and love for music in North Belfast, giving the schoolgirls a singing and performing lesson to remember.