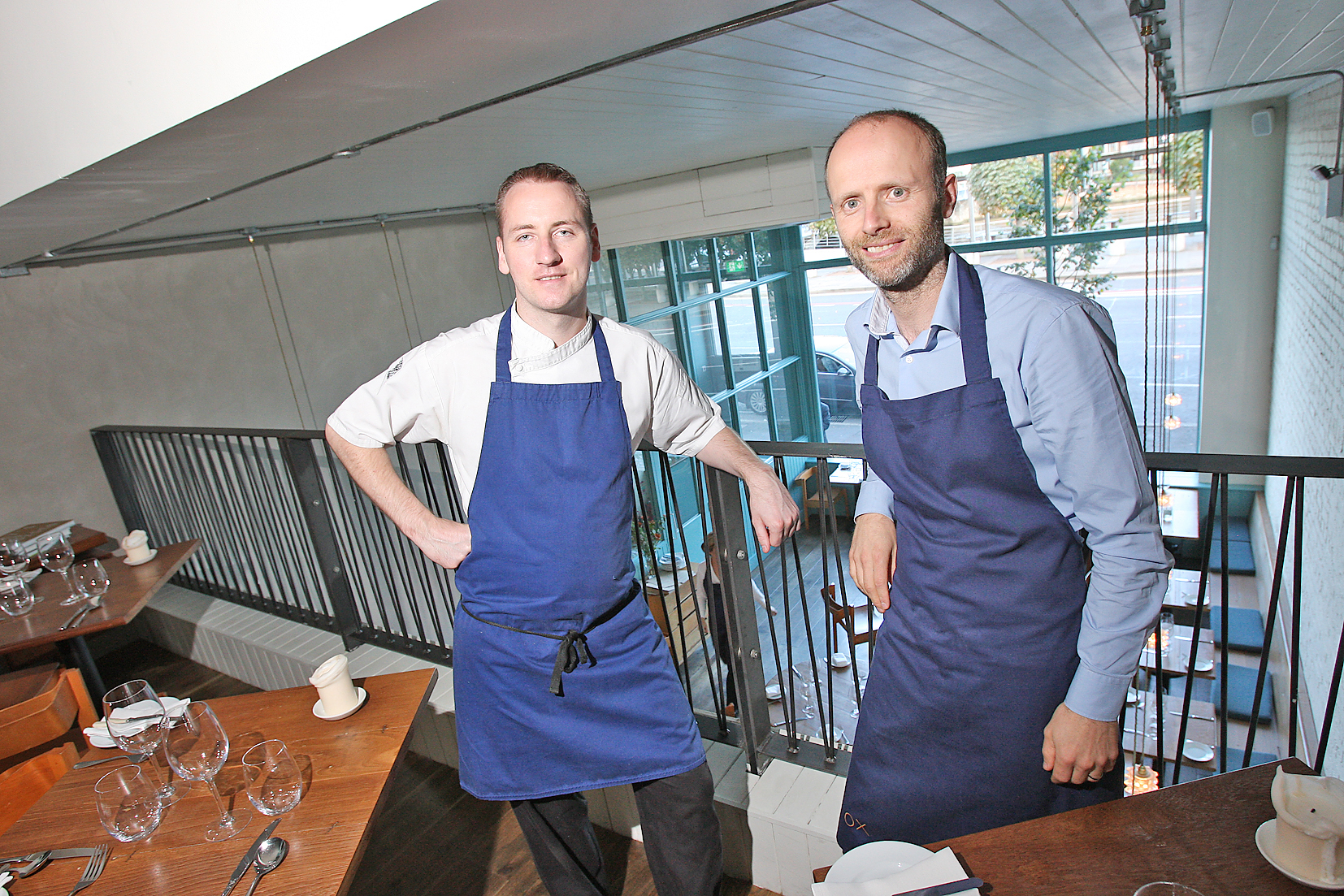 BOOKINGS had already been made months in advance but having just been awarded a coveted Michelin star – the global benchmark in fine dining, quality and service – the demand to secure a seat and sample the menu at OX restaurant is bound to increase.

OX opened its doors in Oxford Street in 2013 and the creative culinary flair of Glen Road man and former CBS pupil Stephen Toman and front-of-house manager and co-owner Alain Kerloc’h, along with their first-rate team, have put Belfast firmly back on the gastronomic map.

Sitting down ahead of a booked-out service later that night, Stephen told Daily Belfast that things have been “surreal” since Alain told him the news.

“I believed Alain and then I didn’t believe him,” he said. “It was crazy when we heard the news last Wednesday. It hasn’t sunk in yet. We’ve had so many people congratulating us, it’s been hectic.”

“It was around 2.30pm and I just happened to look at my phone and there it was,” said Alain. “Stevie was still plating food and I came in to the kitchen and said, ‘We’ve got it’ and Stevie replied, ‘What did we get?’”

With a firm friendship forged in the kitchens of Paris, the pair kept in touch back in Belfast when Stephen was the head chef at James Street South and Alain was working in Deanes.

“We used to see each other, catch up, as the back door of James Street South and Deanes share the same yard so were able to keep in touch that way,” explained Stephen.

The location of the new Michelin sensation has been key to its success, Stephen believes.

“Where we are is an amazing location, it’s just beside the river and I contacted Alain when I first saw the ‘To Let’ sign go up. We both came in and felt the energy of the place and knew straight away that it was something special.”

Just location, then? Far from it. Hard work and dedication, as ever, are the platform for any creative success.

“I think the key to our success is that myself and Alain are here every day. We are always here, bouncing off each other. if Alain needs a wine to showcase for lunch or evening service I’ll try to match the food to that wine. All we ask ahead of a booking is dietary requirements and allergies so our customers trust us and we just go for it.”

Alain said that their customers love an element of surprise when it comes to OX’s menu.

“They get flavours they might not always order or have tasted,” he said. “Lots of people have said that they would never have ordered a certain dish and then love it.”

When OX first opened it did so with a team of eight – now the staff number is 18.

“We really just have to keep doing what we are doing,” said Stephen. “You do your best, you work your hardest and the rest follows, even Michelin, which is the standard to achieve, it’s the bible of our industry.”

Alain said the award was won by the team and will be celebrated by the team.

“When we are off we are going to show our appreciation to them and appreciate together what we have achieved together.”